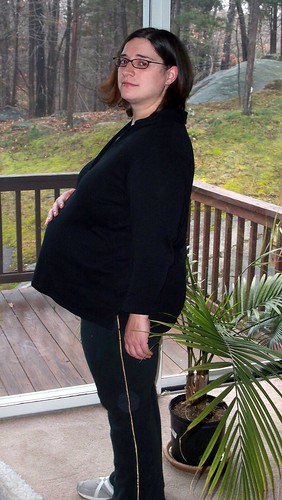 Damp.  That is how things are around here today.  It rained all night and it is raining very steadily this morning.  We are pretty sure that there is some minor roof leakage coming down to the living room ceiling.  It is nearly impossible to tell but I think that the “wet” area is slightly cooler than the rest of the ceiling indicating trace amounts of current water there.  That is better than the plumbing being the problem; I think.

I started work at eight thirty this morning.  Dominica slept in until almost eleven.  She was really exhausted after spending the entire afternoon and evening at the hospital last night.  Nothing like adding stress and exhaustion to the woman who is past due to have a baby.

At eleven this morning, Dominica’s water broke.  It looks like the baby has finally had enough and is ready to come out and greet everyone.  Dominica called the midwife and we need to go in early for a few things but nothing urgent.  Could be a long time before labor really starts but because Dominica needs an antibiotic we need to actually be at the hospital.  News will probably be rather slow as we will be just reading and relaxing for quite some time.

Bob’s delivered our dressed at twelve thirty.  That was the last thing that we needed to wait for.  My out of office assistant is turned on and I have signed out from work.  The announcement has been emailed out and we are heading to the hospital!

I don’t know if I can update SGL from the hospital or not.  But I can update Twitter so keep checking in either here (Twitter in the top left) or go directly to Twitter for the latest news.

Posting just before we leave.