If anyone out there can be really dedicated to loving a Boston Terrier, Annie is up for adoption.  She is eleven years old and needs to be in a home without other pets.  She is currently in a foster home.  Speaking as someone who has rescued a Boston Terrier, there is nothing more wonderful that providing a wonderful home and caring environment for someone who has “lost” their family.  An eleven year old will desperately be seeking comfort as her world has been torn apart.  A dog like this needs security and a lot of snuggling and reassurance.  She really needs to know that there is someone who really loves her. 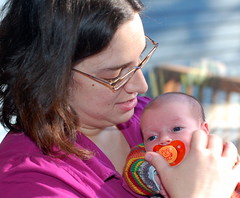 Oreo had a restless night and appears to be about the same first thing this morning.  It is pretty difficult to judge illness on a sleeping dog, however, so we will have to take a “reading” later in the day.

Liesl was pretty fussy last night and got us up around four thirty just wanting to be held.  So I stayed up with her until seven thirty or so when she was clearly hungry.  So then Dominica got up and stayed up with her for a while feeding her and I went to sleep.

I finally got up at ten thirty, showered and headed to the basement to work on SGL, check email and messages and to log into the office to get some work done.  The industry freeze starts tomorrow and anything that we are going to get done before it hits has to be done today.  So I am taking advantage of being up while everyone else is asleep to get some stuff done before January.  It is also a chance to get in some hours prior to my big rate cut that is coming on January 1st.

I forgot to mention yesterday that I posted some additional pictures of Liesl on to Flickr.  These few are the first pictures taken with the new Nikkor F1.4 50mm lens.  I took a series of shots of Dominica holding Liesl by the deck door in Liesl’s new striped sweater than her Grandma Tocco knit for her.

I added a bunch of pictures of Oreo to the Boston Commons group on Flickr today.

Oreo came down to the basement just after noon.  He seemed to be feeling slightly better than he did yesterday but it is impossible to really tell.  He stretched and itched and seemed to be walking okay, but he wasn’t hungry and just wanted to lay beside me on his Star Wars pillow and be covered up in his fleece blankets.

Lunch for me today was just cereal.  Dominica and Liesl didn’t leave the bedroom until almost two in the afternoon so I was left eating on my own.

I made breakfast for Oreo and after a few minutes he decided that he would give it a try.  This is his first food in twenty four hours.

The light was pretty good, for a change, this afternoon so I took a nice walk around Chapel Hill and took some pictures with my new 50mm lens.  Now we have a nice set of pictures to show to people to give them an idea of where it is that we live.  No one from back home really has a good feel for what downstate in Westchester is like.  I took seventy-nine pictures while walking and decided to post about thirty of them.

For dinner, Dominica cooked Quorn chicken with broccoli meals, broccoli au grautin and vegetable steamed rice.  We watched a little Hulu on the PS3.  Then, after dinner, Liesl decided to take a long evening nap sleeping on my chest after I fed her a bottle.  She ended up sleeping on my chest for almost eight hours until one thirty in the morning!

While Liesl was sleeping on my chest we all watched the first half of the first season of Reba which neither of us have ever seen.  As far as we can tell the show was really made to be a statement about Texas.  The show is just one shot at Texas after another.

Oh, about today’s title.  Yes, Liesl is sixteen days old going on seventeen.  It just seemed appropriate.  And to celebrate this being a “Liesl Day” (watch The Sound of Music if you don’t get it) you can head over to www.statefarm.com/teendriving and download Modern Music’s new rock rendition of the classic song “Sixteen Going on Seventeen“.  It is a free MP3 download paid for by State Farm.  Good song too.