Liesl ended up sleeping on my chest in the living room until two thirty in the morning!  She was so peaceful that we did not want to wake her.  So we stayed up far longer than we wanted to be awake.  We were extremely tired by the time that we got to bed.  Tomorrow is going to be really rough.  Dominica, Liesl and Oreo can sleep in but I have to be up for work in the morning so it was a very short night. 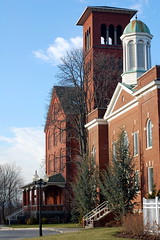 Today is the beginning of the financial industry’s year end freeze so, in theory, my workload drops dramatically starting today.  It needs to after the past two weeks.  We have all really been looking forward to this.  This is the financial and banking industry’s official notification that Christmas is just around the corner.

Oreo ate his breakfast and then got really sick this morning.  Apparently he is not feeling as much better as we had thought that he might be.

I was on eBay this morning and found an amazing deal on Kadee Micro-Trains 55050 Genesee Wyoming Hopper 590002.  So I picked up five of them.  I collect G&W models.  You have to having grown up right next to the railroad.

Work was pretty slow all day with the afternoon being even slower than the morning.  It’s awesome.

Early this evening Dominica went to Stop and Shop to do the grocery shopping leaving Liesl alone at home with me for a few hours.  Liesl just snuggled on my chest and fell asleep so I put on some of the new Knight Rider on Hulu and just let her sleep.  I am getting good at this “dad” thing.

Liesl new swing arrived today.  This is a second swing that we decided was needed because she loves the first one so much.  This one does not use batteries but plugs into the wall and has both a swing and a glider mode for two different motions.  We assembled it tonight and moved it up to our bedroom.  Our hope is that Liesl will really like it and might be willing to sleep in there rather than in bed with us.  We just don’t have enough room in the bed for all three of us and since Liesl wants to be held when she sleeps it pretty much means that one of us has to be half awake holder her all night.  That makes it even harder to sleep since we are keeping the house so warm these days that it is causes us to not sleep very well just because of the warmth.  So we are hoping that this might be a good solution for at least part of the night.  The new swing is much larger than the old one that we have in the living room.

The weather was incredibly warm here today with temperatures almost reaching sixty degrees.  It was so warm that even in a slight drizzle it was completely comfortable walking Oreo without a jacket at all.  Not what I was expecting a week and a half before Christmas.

Oreo did manage to eat his full dinner tonight.  He has barely eaten in days so he was really hungry.  To keep him from gorging himself and making himself sick again just from eating so fast I split his meals into thirds and made him wait between each portion.  That seemed to work and he was happy and perky all evening.