It was only our second night with Liesl and we all actually managed to get sleep last night.  She doesn’t exactly sleep through the night but she sleeps for four or five hour stretches and allows us to get some sleep in.  Not bad at all.

The job today for Dominica’s dad and I is to get out to Buy Buy Baby and get the swing replaced that doesn’t work.  The one that we have plays music and we can hear the motor running but it doesn’t make the swing swing at all.  Luckily the shipping label is still on the box so we shouldn’t have any problem returning it.

We left to go to Buy Buy Baby around noonish, just after having eaten lunch, and made it all of the way to the Taconic Parkway before discovering that the car adapter for the GPS unit was smashed and useless.  So the GPS ran out of juice and we had no idea how to get down to where we needed to go in Scarsdale.  So we turned around and just made a trip to the Crompond, NY post office. 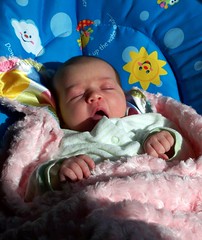 The Crompond post office was actually a great find.  It is closer to us than the Peekskill post office and loads more convenient.  It is a little country post office with just a single person working.  Very handy for normal things.  We stopped in there and sent off two boxes of stuff.  One box of video games heading to Texas for our nieces and one box of camera supplies to Dominica’s cousin.  This was my Nikon 5005 SLR that I used to take a thousand or two images (mostly slide and monochrome print) over the years.  I bought the camera around the time that I was seventeen and it was the camera that I used when I was doing sports and covers for the newspaper.  It is sad to see it leave but I am happy that someone will get some use out of it.  I have been on all digital for years now and know that I will never use a film camera again.  If we were to keep it it would just be a waste.

At home we gathered directions to Buy Buy Baby in Scarsdale from Google Maps and headed out again at around two in the afternoon.  It took almost an hour to get there but the trip is incredibly simple and I could do it again without any directions without any problem.

The exchange at Buy Buy Baby was incredibly simple.  It was just a fast exchange and we were in and out of the store in under five minutes.  I have never been in a Buy Buy Baby before but it is really nice.  It is the baby store chain owned and operated by Bed, Bath and Beyond and it is laid out just like a BB&B.

It was four when we got back to Peekskill.  Then we set up the papasan swing and tried it out.  Liesl loves it.  She also really likes nature sounds, which it makes.  We have been having her sleep with our Timex clock radio with nature sounds running all of the time.

This evening we had a fire in the fireplace.  Liesl’s first fire!  She will likely be having a lot of these over the years much as I did growing up.  My parents had a fireplace in the living room of the old farm house and then a fireplace in the living room of the new house that they built on the farm.  Then, when I was off at college, dad installed the fireplace from the old farmhouse into the basement of the new house.

We put on Transformers which just arrived from Amazon on BluRay.  It is our second BluRay movie.  It was cute.  Nothing amazing but a decent movie.  Dominica has seen it before.  This was my first time seeing it.  It is a very popular title first on HD-DVD and then on BluRay once HD-DVD died out.

Dominica went to bed really early around nine and her parents went to bed around ten.  Liesl was very happy in her new swing so I stayed up with her to let Dominica get as much sleep as possible.  She was so happy in the swing that I ended up staying up until three thirty in the morning letting her sleep!

I spent my quiet baby time in the living room next to Liesl playing Fable 2 on the XBOX 360.  Getting that amount of time to play it solid allowed me to make some significant advances in the game.  This is the most that I have gotten to play the game yet.  So far I really like it.