Liesl really slept last night.  We went to bed around ten thirty and she pretty much slept all night long!  This was definitely the most sleeping that she has done yet.  Quite impressive.  We were definitely not expecting her to allow us to get this much sleep already. 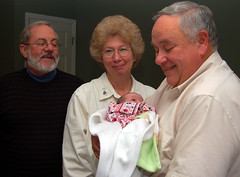 I got up just after eight this morning and showered and got ready for the day.  Then I came down and visited with everyone, since they were already up, for a little while before heading down to the basement to get to work.

Dad, aunt Sharon and uncle Leo went out to Pastel’s in the Beach Shopping Center to get breakfast before hitting the road.  They woud have just eaten on the road but they wanted to be able to see Dominica and Liesl before they left.

Everyone took off around eleven this morning.  Now Dominica and I are alone with the baby.  Alone for real.  No one to pass her off to and no one arriving in a few hours for the “next shift.”  Just us and Liesl.  Now it gets scary 😉

I had a really busy day at the office.  It is a very busy time of year so it is not unexpected.  I did get a chance over my lunch break (which isn’t so much a break as I am constantly on my BlackBerry and checking in on requests) to play a little of Fable 2.  Dominica started playing it herself this morning but then decided that she wanted to play Fable 1 before getting into the sequel as it truly is a sequel continuing the story from the first installment (or so I am told, I am playing them out of order.)

Today is definitely a relaxing day for us.  Liesl slept well last night but we are still tired.  We spent the evening relaxing in the living room with Oreo and Liesl with a fire in the fireplace that burned most of the night (two artificial logs done sequentially.)

The fire didn’t go out until late so Dominica, Oreo and Liesl all went to bed and I stayed up waiting for the fire to die down enough so that I could close the glass doors and go to bed.  It took about an hour before it was safe to wrap things up.  I played a little Fable 2 while I was waiting.