I slept pretty solidly last night once I finally got to sleep around one in the morning.  I slept until eight thirty local time giving me seven and a half hours on top of the hour and a half that I got yesterday evening for a total of nine hours of sleep since getting out of bed in Frankfort on Saturday morning.  Far from being really rested but doing okay.  I don’t have to drive a single mile today so I am fine.

I got up and worked for a few hours getting caught up on stuff as much as possible.  Then, for a very late breakfast, Francesca, Garrett and I went to Waffle House for omelets and waffles.  We had been talking about getting Waffle House since yesterday.  The girls had gone to the beach with Joe and Brit so it was just us getting breakfast since Bennie was at work. 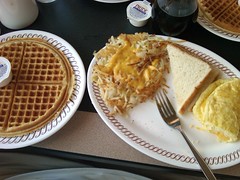 Breakfast was awesome.  One of the best things about life in the American south is getting the chance to eat at Waffle House.  I love Waffle House.  Cheap, friendly, fast and delicious.

Back to the house to work for the rest of the day.  It was a very slow day for me.  Nothing adventurous.  Just sitting around the house doing my office work while the girls spent the day with the Disney Channel playing on “continuous loop”.  For several hours they were even watching the same shows (not the same “shows” but the very same episodes of those same shows that they had seen earlier in the day) that they had already watched and pretty much nothing was on at all all day that they (let alone me!) had watched within the last few days while in New York.  There is so little content on the Disney channel.  It is insane.  It’s just the same few items playing in a loop with loads and loads of commercials.  I really do love The Wizards of Waverly Place, though.  That is a great show.  I am addicted to it.

I talked to Dominica a little today and she said that our newspaper did finally arrive this weekend.  So she is now getting coupons that way so, in theory, that will save us a lot of money.  She has subscribed to one of those coupon services and has this whole process worked out for doing coupon management.  I’ll be surprised if the savings cover all of the overhead both in spending and in time spent managing it, but we will see.  Seems to be it would be easier to work a few hours contracting somewhere each week and get more than 100x better return on the time investment with less actual effort expended.

Today was my catchup day.  Catchup on sleep, catchup on work.  Nothing really happened today.  Worked all day and we had sausage and peppers for dinner.  After dinner, Joe, Brittany, Emily and I went out to Dairy Queen for dessert but at 9:45 the DQ was already closed!  We couldn’t believe that they closed to early so we went on to WattaBurger and got milkshakes there.

I went to bed early tonight – probably around eleven central time.  All I did was get home from our milkshake run, finish my milkshake and head off to bed.  Today was my only day without extra stuff going on.  Tomorrow I will be working at the house most of the day but then heading out to go to SpiceCorps Houston in the evening so that will make for a pretty busy day.

The weather is really awesome, considering.  East Texas has been in the hundreds for the last three weeks having one of the hottest July streaks in a long time.  Once we arrived the temperature fell and was in the high eighties and low nineties which is surprising cool for Houston.  It is still hot and humid.  No doubt about that.  But you do not walk out the door into the wall of hot air like an oven when you go outside.  This is New York hot, not Houston hot.  Nothing like I had been expecting.  I am very pleased with Texas at this temperature.  Very bearable.