Day Two in Houston, Texas.  It is slightly hotter today than it was yesterday but only by a degree or two.  The heat index broke one hundred today.  A heat index of one hundred is really mild for Houston in late July so I am happy with that.  At that index you can still step outside without being covered in sweat as long as you are not out for long and do not really do anything while you are out there.

After lunch it was a busy work day for me.  There was a lot to get done so that I would be able to leave on the early side to get out for SpiceCorps.  Being in a region on central time while working eastern time is quite handy.  Having an evening event in central time means that I can still work a nice, long day back in “New York” and still make it to events across the city. 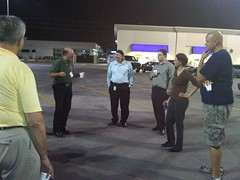 I took Francesca’s Toyota Sequoia, to which I am quite accustomed by now having driven almost one thousand miles it in already, at five thirty local time and headed out to the far side of Houston for our event this evening.  The distance really was not too bad but it was rush hour traffic which is a bit of a pain in Houston.  The drive is not bad it is just that everything moves really slowly.  It is not a level of traffic in which you really worry about driving you just have to calculate how much longer it is going to take to get anywhere.

The drive took almost an hour and a half so it is a good thing that I left as early as I did.  I was just on time as I arrived at the location on I10, the Katy Freeway, many miles west of Houston proper.

I pulled into the parking garage of the building where we were going to be meeting and was greeted by a fellow SpiceWorks user who was just preparing to head into the meeting.  We introduced ourselves and discovered that we were the two big “celebrities” heading to this event.  It was Talon63 who I met outside.  It was he who I unseated as the top SpiceWorks poster a few months ago and who has now, just this week, fallen into third place in the total rankings.  He was the SpiceWorks IT Hero contest for 2008 at SpiceWorld as well.  It was very apropos for us to meet in the parking lot and to be able to walk into the event together.

We got inside and made it up to the meeting conference room.  There were ten or twelve people already there ahead of us and everything was already set up which was nice.  I am very thankful to have some people doing organization other than just myself.

The team was ready with a practical joke for me as I arrived.  I walked up to the desk at the front of the conference room where Duwayne was handing out name tags for everyone.  As I walked up he looked up at me and said, “You look like you might be the real Scott Alan Miller.”  This caught me a little off guard.  I said, “The real Scott Alan Miller?”  Then I turned around to find the entire room full of people who were wearing pre-printed namebadges that all said “Scott Alan Miller” on them!

There has been a running joke in the SpiceWorks community for some time that I am actually multiple people who use a single account to post to SpiceWorks.  So we all found this really hilarious.  It was a great joke.  There was also speculation that Talon63 and I were actually the same person as we have both been extremely prolific participants in the SpiceWorks community but never at the same time.  So tonight’s presence puts that rumour to rest as well.

The meeting went really well.  We had a really great group of people and had a record turn out for a SpiceCorps event – 21 people!  We had a great time and we even had people bring in jalapeno poppers, fresh home-made cinnamon rolls, cake, pies plus soda too.  We met for close to three hours before breaking so that some people could head for home.

After the official meeting was over, Talon63 and I hung out in the parking garage talking for probably half an hour and then we met up with over half of the people from the meeting in a parking lot just down the street where we were able to enjoy some home-made, microbrewed beer from one of our organizers.  Unlike most of the United States, it is legal to consume alcohol in public in Texas.  The group ended up hanging out there for a really long time with the last of us straggling out well after one in the morning!  It was almost seven hours of SpiceCorps for those people who got there before the meeting started and held out until the very end.

My drive home went well.  My mobile phone had died and that meant that I had no maps or GPS and no way to call anyone since I had not thought to bring a charger with me.  Oops.  I did not miss a single turn the entire way back to Francesca’s, though, so it was fine.  It was after two in the morning when I pulled in to League City.

Instead of going straight to bed I did as much packing as I could tonight.   Tomorrow morning is going to come very quickly and I am not going to be thinking very clearly in the morning so definitely best if I can get as much done tonight as possible.  I need to be up at five in the morning in order to make my flight out of Houston so there is very little opportunity for sleep tonight.  I got almost everything packed so that it is just my CPAP and last minute items that I need to deal with tomorrow.

Tomorrow I fly to Austin at seven and will be spending the day working from the SpiceWorks offices there.  Then in the afternoon I fly back to White Plains.  I should be home around midnight.  I am going to be very tired by the time that I arrived back in New York.  I have hardly gotten any sleep for days and tonight is not going to help the situation at all.