We had a major thunderstorm last night.  Some of the loudest thunder that I have ever heard.  At one point there was an unexpected crack that was so loud that both Dominica and I jumped while in bed.  I mean really, really loud.

Dad and Dominica got right up nice and early this morning and were working on the painting straight away.  They really want to get this all done today.  Unfortunately, unlike yesterday which was pretty cool, today is set to be in the nineties here and with the crazy high humidity the heat index is going to be out of control.  Our heat index will be around ninety-seven degrees today.

It did not take too long of painting with the air conditioning running, which we had switched to last night so that we would be able to sleep, before Dominica realized that we just had to have fresh air in the house.  So the A/C turned off and the windows were opened.  Ouch.  What a day to have the windows open.

Dominica was not feeling well from the fumes in the house from the paint so we took Liesl out to the Westchester Diner for some lunch.  We tried using Google Map to find an alternative route to get there going through the Blue Mountain Reserve but the road that Google listed there was literally a horse path and has not been a road for decades at least if ever.  So we spent ten minutes going up that road and back down once we reached the “horses only” barrier. Dad decided to stay behind and rest in the basement rather than going out for lunch. 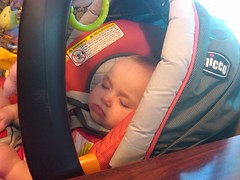 Lunch was good.  Liesl was exhausted and slept all through lunch.  Dad was too.

We got home and discovered that Oreo had had a brush with the wall (read: our dog had a giant yellow patch on his side.)  So he had to be cleaned up and a search was made for the bit of wall with less paint and extra dog hair.

After lunch I worked on the last bit of file transfers off of the SAN device, the Netgear SC101.  I wrapped up just before three this afternoon and disconnected the device and gave it to dad.  I liked having the SC101 even through it had myriad problems.  Having a terabyte of networked storage a couple of years ago was a really great thing for us.  Now it is relatively small as far as home storage space goes and nowhere near as much as we need for all of the stuff that we do.  We have 3TB in use online right now and plan to get another 2TB is about a month.

By four this afternoon it was up to a heat index of ninety-eight – even hotter than we had first expected.  So Dominica decided that we needed to go back to air conditioning even with the paint fumes.  Liesl came down to the basement to hang out with me where the air was a little better while they continued painting.  The final coat started at three thirty.

I put in some time doing some much needed file management this afternoon.  We have so many files and so much storage that it has become a major challenge to keep everything organized.  We have sprawling backups that have occurred when a system was going to be rebuilt or moved and then most of the files in those backups are never needed and the filesystem just fills up with garbage that we can never sort through.  I cannot believe in how many locations I have MP3 download files.  It is out of control.  Between Mozy for backups and the OpenFiler for centralization I am now bringing this mess under control.  Hundreds of gigs of data sprawl that can be deduplicated or just tossed altogether.  Tons of this stuff is just old garbage that we kept “just in case”.  Like hundreds of photos from a T-Mobile project that Dominica and I did over three years ago.  I don’t think that anyone is ever going to want those pictures again.  You can just imagine, “Hey Mr. Store Manager, here is a picture of what the bottom drawer of your POS system looked like three years ago.”  Yeah, they don’t want those.

Work slowed down this afternoon and was not bad at all.  Liesl spent the afternoon and early evening just hanging out down in the basement with me to keep her away from the fumes.  We set up her Pack’n’Play and she hung out in there with her Cheer Bear and other toys.  Dominica set up Netflix on her laptop so that Liesl could watch videos of The Wiggles from there.

The painting wrapped up around five thirty.  Dominica already had the entertainment system set back up.  The XBOX 360, PS3 and Wii were all hooked up, along with our wireless access, earlier today.  Then it was time to put the house back in order so that we can get back to normal.

We have new curtains, dark brown ones, going up in the living room today.  That is the last really big thing to do today.  That took over an hour just in deciding how they would be put up.  Once that was decided it turned out that we needed another section of curtains.  So there was a trip to Bed, Bath and Beyond needed.

We had a quick dinner and watched an episode of Father Ted which was just converted to h.264 yesterday on the PS3.  Then Dominica took off to do the necessary shopping before the store closed and I watched Liesl while dad worked on the curtains.

While Dominica was out shopping the big electrical storm that has been pounding upstate New York all day finally reached us.  Light rain and some serious thunder and lightning.  Dad, Liesl and I went out under the “rain tree” – the tree in the neighbour’s yard that blocks all of the rain where Liesl and I like to stand when it is raining – and checked out the storm.  I really wish that I would have had time to have set up my camera.  Tonight was the perfect opportunity to get shots of the continuous lightning over Chapel Hill.

Liesl fell asleep just as Dominica arrived back home.  Then we set to work actually hanging the curtains.  That took about an hour or so.  What a difference they make as well!  The paint and the curtains really work well together.  The curtains are a dark chocolate brown and work really nicely with the yellowy orange “Belgian Waffle” paint.

We put on a little Father Ted and watched two episodes while having popcorn and dessert before heading off to bed.  I am working the early shift tomorrow so have to be up nice and early.  Dad is hoping to get onto the road to go back home tomorrow as well.  We still have to unload a ton of stuff from his car before he will be able to leave too.  I can’t believe that we have not gotten to that yet.  There are a lot of really big items in there.

SpiceWorks 4.1 released tonight.  It just went into beta testing yesterday.  I have been working with the folks there to get Solaris scanning working which has been one of my big features requests since I really started using the system since I am the Sun Group Admin there and as I have a lot more Solaris to scan than most people using the system.  It is great to see Solaris 10 getting scanned and updated in the system.  A very nice improvement for those of us running Sun’s operating system.