We had a really rough night last night.  Liesl was up all night either screaming or tossing and turning.  We tried moving her back and forth between her room and ours.  We tried rocking her.  Snuggling her.  Feeding her.  Nothing made a difference.  She might as well have been awake all night.  No sleep for us. 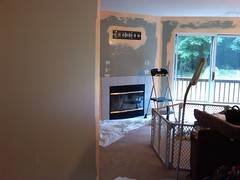 Dominica got up early with Liesl and just gave up on the whole sleeping thing and took her down to the living room.  I got about an hour’s sleep after that.

By the time that I got up and came downstairs the painting had already begun.  All of the furniture and stuff had been moved into the middle of the room and a pen was built for Liesl so that she could hang out in the middle of the room and watch The Wiggles while the painting was underway.  It is quite exciting to have the main part of the house now being painted.  The old paint job was so dark and dingy and, more importantly, so poorly done that it really detracts from what, in my opinion, is a very nice house.  It looked cheap and shoddy just because of a sloppy paint job.  The colour was not all that bad except that in a room with such little light it was always very dark, especially at night when we need to illuminate the house artificially.

The colour going on is a medium-dark, peachy shade called Belgian Waffle.  It is a happy, upbeat colour that Dominica saw at a friend’s friend’s house several months ago and decided was what she wanted.  Although now that she is actually seeing it on our walls she is not nearly as sure that this was what she wanted as before. 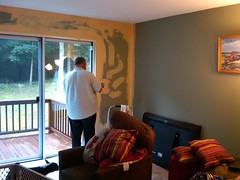 The big physical challenge of the day is moving the television from above the fireplace.  It is large and heavy and very solidly mounted to the wall.  Dad and I moved that so that the painting could be done behind it.  We also came up with a very reasonable, we hope, strategy for running the television cables through the wall so that we can almost, if not completely, hide the cables making the living room entertainment setup that much nicer.  I really hate dangling cables which are the bane of modern home theatre rooms.  There are so many cables needed and just nowhere to put them.  Houses were not built with cable management in mind although they really should be these days.

It rained early this morning and remained overcast and cool all day.  This is some seriously abnormally awesome weather for August even in the Hudson Valley.  It continues to rain every few days even through July and August.  Very unusual.  It has been pretty cool, mostly, as well.  Although it was cool today in the mid-seventies it was so humid and muggy that we were sweating most of the day anyway. 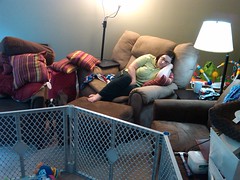 Dad fixed the back screen door and showed me how to install the screen on the front door so we turned off the air conditioning and got fresh air in the house – much more fresh air than we have been getting thus far.  Having the screen in the front door really makes a difference.  We hooked up the massive new, high-velocity fan and set it on high and put it in the front hallway and it provided a constant rush of air through the main part of the house all day.  Perfect for whisking away paint odors.

At lunch time I drove down to Buchanan to the Westchester Diner and picked up lunch.  We all got burgers.  Cheddar and sauteed onion veggie burgers for Dominica and I and a bacon cheeseburger for dad.  I also discovered that if we do not use the GPS and just drive down Hudson to Washington and head south on Washington that we can get to and from the Westchester Diner a few minutes faster with a bit less distance too.  It is much closer than I had realized.

The new paint is making an amazing difference on how the house looks.  Even with just a bit less than half of the walls painted the room is so much brighter and more modern.  It feels like a much newer house now.  It has been so dreary and dismal in the living areas with that old paint.  This is really great.  Not to mention the improvement over the shoddy paint job that was done before.  Now that walls will be all one shade.

I ended up having a really busy afternoon of work so did not have very much time to spend upstairs.  Sunday afternoons always have the potential to be really busy.  Especially today with my boss being in California.  Normally he helps cover the Sunday schedule.

After work was over I went out, at around seven thirty, to pick up dinner.  Dad wanted a fish fry and we were unsure of where to find one on a Sunday night, especially this late, so I hunted around online and discovered that the Peekskill Brewery had a late night kitchen with pub fare available.  So I drove down to the train station and enjoyed a Paramount Pale Ale at the Peekskill Brewery while waiting for three orders of fish and chips. 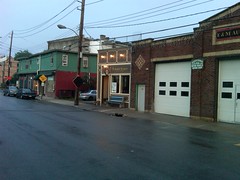 The food was really good.  It was excellent fish’n’chips.  A bit expensive but very tasty.  They put lemon zest on their french fries which was really good too.  For dessert we continued eating the desserts that Dominica and I had picked up from the Stop and Shop the night before dad came down.  We finally finished off the mouse cake tonight and the coconut custard pie is almost gone.

We called it an early night.  Everyone went to bed just after ten.  I did some quick setup to make sure that the Handbrake jobs would continue to run all night and did the very last of the SAN backups moving everything off of the SAN device so that I can disconnect it and pack it up for dad to take back home with him.  He will definitely get some good use out of an additional 1TB of network storage capacity!

Dominica read her Kindle for a little while.  She is reading “Treasure Island” which she got for free on the Kindle.  I played a little bit of Dragon Quest IV: Chapters of the Chosen on the Nintendo DS.  I am still on the second “chapter” and only about five hours into the game.

Tomorrow is a another big painting day.  Today the “television” wall was completely painted as well as the wall with the sliding glass doors.  So roughly half of the space is painted.  It is so much brighter in here.  We never imagined that the paint would make this much of a difference.  The new paint is a lot more glossy as well.  It is a satin finish.  The old paint was matte, we are pretty sure, or possibly a really dull eggshell.  So it just sucked the light out of the room.  After tomorrow it is going to be so bright that we won’t be needing all of those extra lights that we have been considering.  Ridiculous how we have been living in a cave all of this time and not really realizing that it was because of the paint and not because of the lack of lighting.