This morning was a crazy cleaning morning.  Tons to be done.  My dad is coming to visit early this afternoon and then later on today my grandparents and my aunt Gayle are coming in from Ohio to stay for the weekend.  This will be their only chance to ever seen where we live before we move to Texas so we want to get the house in order as much as possible before they arrive.  So stuff was going up to the attic, new wall decorations were being put up, lots of general cleaning, etc.

It is Saturday so I had office work to do as usual.  I helped Dominica clean when I could but was stuck in the basement for much of the day.  That did give us a chance to do some serious basement cleaning, though, and the basement is looking so much better than it ever has.

I also kept up, as much as possible, with DVD conversions.  I am trying as hard as possible to get a complete bin of DVDs prepared for dad to take back with him for storage.  I only have a small number ready at this point.  It is probably going to be a small load this time.

Dad left from Pavilion at eight thirty this morning and arrived in Peekskill at around a quarter until three.  His drive went pretty well.  His car is really, really loaded.  He has discovered how to remove his rear seat so he is able to really pack the stuff in now.

The Ohioans arrived in Peekskill around six.  They had some problems finding their hotel and called to say that they were lost and it turned out that there were in Buchanan – right at the exit where we were intended to get dinner with them at the Westchester Diner!  How perfect.  They could see the Westchester Diner when they called.  So we had them just pull over and wait for us there.  Then we drove down and met them for dinner.  That really worked out well.  It was actually easier than having them go to the hotel first. 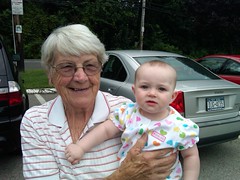 I got a great picture of grandma Myers holding Liesl in the parking lot of the Westchester Diner in Buchanan. This was taken with my BlackBerry right as we all got out of the cars.

Almost everyone got the beer battered fish for dinner.  Grandma and grandpa thought that the fish looked like too much food and decided that they would just get “small” fried fish sandwiches, ha.  Those sandwiches ended up being two enormous slabs of fish each making the sandwiches actually larger than the fish dinner.  Everyone had a great time hanging out with Liesl who was in a really good mood today.

We had a chance to break our big news at dinner that we are moving to Texas (we think… not official yet.)  My grandparents and my aunt had not heard yet since they had been traveling since we found out ourselves.  So they were pretty surprised to learn that we would be leaving Westchester possibly very soon.  This also made them very, very glad that they had decided to come visit us now and to see Liesl while they had the chance since once we move to Texas it will be nearly impossible for them to come visit us and our schedule will make it difficult to get out to Ohio although we will have an opportunity to stop there anytime that we are driving back and forth between dad’s place and Texas or between our “summer home” and Texas wherever our summer home ends up being.

Speaking of being thankful – today while cleaning we decided to throw out the little railroad vignette “layout” that we did to learn some new modeling techniques.  It is not a working railroad and we are never likely to put it on to any sort of display and there is no way for us to use it as a part of some other layout.  It was a chance to learn some modeling and it was perfect for that.  It was many hours of work and rather expensive and turned out pretty well so it has been really tempting to keep it and for the last several months we have.  It would also have been nice to have kept it just because it was a memento of some of the time that we spent during Liesl’s early months.  But it is incredibly impractical so I just marched it out to the dumpster this morning and said goodbye.  It seemed pretty strange to be throwing out the best model train layout that I had ever actually seen in person, but it had to be done.  When we thew it out, though, it occurred to us how blessed we were that one thing after another had kept us from getting to work on the real train layout that we had already invested a lot of money, hundreds of dollars, into parts for.  This one that we threw out was far less than one hundred dollars of investment and was not a running railroad.  But what we have purchased so far is three or four hundred dollars of parts that, when assembled, should be a full working railroad layout of decent size (for a starter railroad) with more than a dozen buildings and lots of details.  Had we started even the most minute portion of that project – from base work to building assembly – we would pretty much be unable to ship any of it to Texas.  As it is everything is still in boxes, bags and bottles and can be shipped easily on the truck when it goes.  So all model railroading is now on indefinite hold until we get to Texas and not just to Texas but to our “final” house there.

After dinner I drove the Ohioans up to the Peekskill Inn and got them situated there.  While they were settling into their room Dominica, dad, Liesl and I drove out to Cold Stone Creamery to pick up the ice cream cupcakes for everyone that Dominica had wanted for her birthday.  Then back to the motel to pick everyone up so that they could come back to our place and see the house.

We hung out at our house until pretty late.  Around eleven.  Then Dominica and I drove everyone back to the motel and came home and pretty much called it a night at that point.  Dominica has a really early morning ahead of her.  Tomorrow is our ninety day mark before our Disney trip and that means that all of our food plans have to be made and booked early tomorrow morning if we want first pick of the restaurants.  So both Dominica and Francesca have to be up really early in the morning to do the food bookings as the reservations open at around six in the morning our time here on the east coast and that means that they are at five in the morning for Francesca.  They are going to be really tired tomorrow.

Tomorrow should, in theory, be a light day for me and we will get to spend the day visiting.  Everyone is heading home on Monday morning or possibly Monday early afternoon in dad’s case.  Dad is staying with us rather than at the Peekskill Inn with the Ohioans.

The Peekskill Inn is really working out well for them as it is so close to us.  Once they saw how difficult it is to get around in this area with the winding streets and heavy tree cover blocking all distance sight they were really happy to be so close that we could easily drive them to and from our house.  Without us being able to do that this would have been a much more stressful trip for them, I think.

Everyone has been having a great time hanging out with little Liesl.  And she is having a great time being the center of attention yet again.  She is still avoiding the “fear of strangers” phase and continues to just love everyone including family as well as strangers that she meets when we take her out to restaurants or shopping.