Today is a very big day for Liesl Lee Miller. She is nine months old.  This morning she has a very large black and blue bruise right in the middle of her forehead.  It is extremely prominent.  Poor little thing.  It does not seem to bother her at all.  She acts as though nothing happened.  She is quite our little trooper.

Because tonight is the second meeting of SpiceCorps New York’s Manhattan Branch (the third overall meeting of SCNY) I had an extra busy day as I attempted to get everything done before I had to leave at four thirty to head down to the city.  If it wasn’t for SpiceCorps I might never make it down to New York at all.

Nothing really big happened today.  Just a lot of work.  I have been so busy this week with all of the stuff that has been going on that I have barely gotten any time to spend with Liesl which is really crappy.  Even being home all day I almost never get to see her.

This afternoon my new Nikon D90 digital SLR arrived from Amazon.  I am very excited.  The D90 is often considered to be the best DX format digital camera on the market today at any price.  Ken Rockwell, THE reviewer of all things DSLR said that the D300 was the best DX format camera ever in early 2008 and by October said that the D90 had replacedit as the best at less than half the price.  He says, “If you’re considering a D300, forget it. Get the D90 instead.”  The D90 not only has some better features than the D300 but actually has better image quality.  This is one amazing DX camera.  And it has ISO 100-6400.  That’s a full stop faster and slower than my former workhorse the D50.

No chance to play with my new toy today.  I got it and opened the box just to see it but that was it.  Did not get time to try out a single picture.  The new camera is, of course, compatible with all of my old lenses so no problems there.  I currently have an entry level Nikon 18-70 and 70-200 that are “pre-VR” kit lenses (but very sharp) and then I have two amazing prime lenses that are ultra-fast: an f1.8 35mm and an f1.4 50mm.  I have a new lens coming to replace the two kit lenses though.

The guys from the forthcoming SpiceCorps Upper Hudson (Albany) group stopped by at half past four to pick me up.  It is great to have a ride into the city.  That saves me a minimum of a half an hour plus about $14.  Awesome.

The ride in went pretty quickly and traffic really was not bad for Manhattan rush hour on Thursday.  It was nice to get a chance to chat in the car with some IT pros before the meeting.  Got us into the IT collaboration mode.

The SpiceCorps meeting went really well.  Katie was there along with several other folks that I now know.  We had a total count of twenty one to twenty five people at the meeting which is an amazing turn out.  At a minimum we matched the number from the Houston group and may have surpassed them.  We had so many that when only about half of the people had arrived we had to move out of the conference room that we were using and into the big open space of the main office.  We also ran out of chairs and had some people standing and some on desks.

I did a presentation on the “SAM Storage Device” today – the HP Proliant DL185 G5 with third party drives running OpenFiler.  It went pretty well.  I did not have nearly enough handouts, though.  I had thought that bringing a dozen or so would be plenty as that gave us a bit of buffer for the number of people that we had expected for the group tonight – which was around ten.  But more than twenty was definitely a pleasant surprise.  We need to get the group website done and have a way for people to post presentation materials on there prior to the SpiceCorps meetings so that anyone who wants them can have instant access to PDFs, PowerPoints, etc. 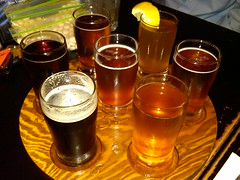 After the meeting was over, Katie, the guys from Albany and I went to the Heartland Brewery on Union Square for dinner.  It was probably close to ten o’clock when we got over there.  Katie and I both opted for the “seasonal beer voyages” which were seven five ounce tasters of the seasonal microbrews that the brewery had on tap.  It was some seriously good beer.  Very impressive.  Brewed in Brooklyn.  I went for the open face fish tacos.  They were quite good although not the style that I usually prefer.  Very difficult to eat.  They were swordfish which Dominica would not like and I did not like as much as salmon – too heavy, I think.  But quite good overall.

Katie caught the midnigth train back up the Hudson.  The Albany guys drove me home which was very convenient.  They also bought us dinner!  That was seventy ounces of beer on that tab too!!  The ride home was pretty quiet as everyone was starting to fall asleep.

It was well after one when I got back home.  I was very tired as I collapsed into bed.  It was quite a long day.  A good one, though.  Barely got to see Liesl at all today which was very crappy.  She and I need to make some serious time this weekend.