Liesl and Oreo got me up pretty early this morning, around six thirty.  Luckily we had been smart and came back to Joe and Britt’s house early last night and had gotten to sleep probably by ten.  I am back to normal work hours today and that means getting up super early every day because they relocated us to a central time zone but our jobs are still based around New York (or in my case London) so all they have done is make it more difficult for us to support our clients during the early hours.  (The early shift now starts at 5:30 rather than 6:30 and the normal day starts at 8:00 rather than 9:00.)  Not dramatically early hours but 5:30 is pretty exceptionally early to be up and doing technical support work when you have to think clearly.  Since our days are ten to fourteen hours long normally having us start in a time zone not aligned with our work just makes it harder for us to do support of this magnitude.

I took Oreo out for his morning walk and he slipped and fell down the top of the stairs inside of the house. Luckily I was right in front of him and realized that he was falling and caught him as he slid down.  He didn’t roll but slid so since I caught him it was more scary for him than dangerous and he did not appear to hurt anything at all other than his ego.  After he went outside he went right back upstairs and asked to get in to bed with Dominica where he curled up and snuggled far away from the dangerous stairs.  Liesl decided that she wanted to get up then so came down to the living room with me so that she could hang out while I worked.

Dominica set up Liesl’s new pop up play house that she got from Joe and Brittany for Christmas at their house last night and this morning was Liesl’s first time getting to play in it.

As of today we officially have an apartment in Los Colinas but we are not going to actually move up there for a week yet.  Dominica’s parents are here until this weekend and this is the last that she will see them until late April when they return for the arrival of baby girl Grice.  Four months is not really all that long.  Dominica is very concerned that she will never see her parents living down here in Texas but, in reality, I have a feeling that with all of the traveling back and forth that she will actually see them nearly as much now just in different way – more longer stretches and fewer really quick visits.

Dominica and Oreo got up around nine.  They came down to join Liesl and I in the living room.  Dominica and Liesl watched some PBS.  Liesl has never seen Sesame Street before or Clifford so she really enjoyed that.  While watching Sesame Street Liesl tried running for the first time as well!

At eleven thirty we drove out to League City to meet the family at Denny’s for lunch.  That ended up taking almost three hours from door to door.  A very long lunch trip.  Work was very slow, though, so it was okay.  I didn’t miss a single thing while I was out. 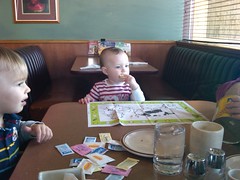 We stopped at the Game Stop next to Denny’s at the mall while we were there and I picked up a copy of Final Fantasy Crystal Chronicles Ring of Fate for the Nintendo DS.  I need Ring of Fate because I accidentally bought Echoes of Time the other day which takes place after Ring of Fate so I need to play them in order.

I dropped Dominica and Liesl off at Francesca’s house and then Oreo and I went back to Joe and Britt’s house so that I could work from there and Oreo could get some time to just relax.  He needs time away from dogs and small children chasing him all over the place.  He just curled up on the love seat and slept the afternoon away.

I returned to the Grices’ house around six after work was done.  I stopped at the other GameStop at Exit 20 on Route 45 on the way up and checked out their used game selection.  Their selection was quite different from the selection at the store that I had already been too and I managed to get Blue Dragon Plus, Legend of Zelda: Phantom Hourglass and Anno 1701: Dawn of Discovery for the Nintendo DS as well as Wii Fit Plus and Tales of Symphonia: Dawn of the New World for the Nintendo Wii.  It was quite a haul of Nintendo system games this week.

I got to the Grices’ at six thirty, just in time for dinner to be ordered from Pei Wei Asian Diner which is Francesca’s favourite restaurant, I hear.  Dominica and I have been looking forward to trying this local Asian fusion place.

The food from Pei Wei was okay but nothing special at all.  Definitely what you would expect from Thai fast food.  It is no wonder we don’t have these in New York or New Jersey – having a local Thai restaurant would totally shut this place out of the market.  The food wasn’t bad at all but certainly not up to even poor non-chain Thai food standards.

The family played a lot of Wii games this evening like Wii Sports Resort.  Everyone really enjoyed that, especially fencing.

Dominica and Liesl went back to Joe and Britt’s house early, around ten thirty, to call it a night.  Dominica spent the evening playing Kingdom Hearts 358/2 Days on her DS.  I stayed at the Grices’ until everyone was calling it a night and drove Joe’s car home for him.

Got off to bed around midnight.  A bit of a late night for those of us who work eastern time rather than central time where we live.