I woke up nice and early this morning and discovered to my horror that the DFW Metroplex was completely covered in snow!  Snow?  Yesterday it was so nice that I was able to walk to work without even wearing a jacket and today we are under snow?  How can this possibly have happened? 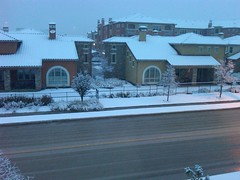 I walked Oreo, made my coffee and then drove over to the office.  It was surprisingly warm, thirty seven degrees, for there to be so much snow on the ground, at least an inch, and for so much to be falling.  The roads were covered in slush but driving was fine.

It was around seven or a little before when I arrived in the office.  I emailed everyone and told the Texans who live any distance from the office to just stay home rather than risking the drive in.  The roads aren’t bad with without any snow plows or salt, with crazy drivers and with massive skyways it is generally not worth driving in such bad weather.

It occurred to me this morning, before leaving the house, that I should get my iPod charged up and usable again.  It has been months since I had it set up and working and I have missed tons of stuff on IT Conversations.  Time to get that working again so that, at least, I can listen to some podcasts while walking between the office and home every day.  Four trips per day adds up. 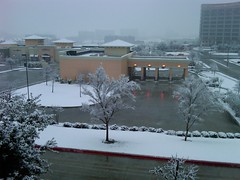 This morning was very busy again but by lunch time things started to settle down a bit.  The office is very empty today and that is contributing to things slowing down.  Some people came into the office but we mostly sent them home early because the weather was getting worse throughout the day.

The weather is definitely going to be a problem from Dominica who was planning on driving down to League City this weekend for Madeline’s birthday slumber party.  Dominica was planning to leave tomorrow morning so that she could be on the south side of Houston before traffic got bad but now it is looking like driving in Dallas tomorrow morning is going to be pretty dangerous.  So we are playing it by ear and seeing what is going to happen there. She might have to wait until Saturday morning before she leaves to avoid the snow.

At lunch I drove home and picked up Liesl and Dominica and we drove to Panera Bread for lunch.  It was a short lunch but it was nice getting to hang out.  I dropped them at the apartment on the way to work.

The afternoon slowed down a lot from this morning and wasn’t actually all that bad.  I actually had some time to breath and was able to leave the office a little bit before six to come home and see the girls.

We just had leftovers for dinner and spent the night playing with Liesl and watching Torchwood.  We were up until around midnight and then it was off to bed.  When we did go to bed it was still snowing.  Who would have guessed it.  I am guessing that there will be no one in the office tomorrow.

I have forgotten to mention on here that my next door neighbour back in Peekskill lowered the price of his house earlier this week.  That puts us into really tough shape.  We know that he is going to take a huge loss on the house but apparently he is backed into a corner and has to do so.  The house started at $400K in December which wasn’t bad since we were at $380K.  We are directly next door sharing a wall.  We have the nicer structure but he has the end unit.  Then he came down to match us in price about two weeks ago.  Now he is down to $365K!  Not good.  We are figuring that we have no way now to sell our house as long as his is on the market.  He is just willing to lose too much money that we can’t lose that much just because he is being reckless.  So our plan is to rent the house instead and hold off for a year or two before trying to sell it again.  Now, of course, we have to go through the challenge of finding renters.

So that whole situation is not incredibly encouraging.  My opinion is that we just have to wait until our neighbour is off of the market.  He is going to lower the price until it sells and we have no desire to compete with that.  We are not in the panic to sell like he is and we aren’t going to take a massive loss just because he has to.  So we just need to hold out.  Someone is going to get an amazing deal on his house and that is great for them.  We got a great deal on our house from someone in a similar position.  We are fine not making a penny on the house we would even lose some.  But nothing like that.  We are in a position to hold out, at least for now, on selling it and that seems to be what we need to do.  We do lose some every month but the numbers he is likely to lose are staggering.  We are convinced that he must be short selling which is not an option for us.  I can’t imagine that he has the kind of cash necessary to cover the loses that he is about to see – and even so no one has bought that house yet.

Although because his price is lower and we are attached there is a greater chance of more people passing through our house since anyone going to look at his will stop by and look at ours too while they are there.  So maybe we will find someone who really likes ours and will be willing to put in an offer.  Although thus far there have only been one or two serious people who have even gone out to look at the house since it went onto the market a month and a half ago.