We were all out way too late last night.  We were pretty much exhausted this morning.  I was the first one up since I had to get up so that I could get started on my class work with Red Hat.  Most everyone did some sleeping in today.

We were supposed to have a very early morning meeting this morning but that was canceled, thankfully.  Otherwise we would have all had to have been awake at six or seven in the morning.  But because it was canceled I was able to sleep in until five minutes to nine when I jumped out of bed and ran down to get into the class.  Luckily I can just wear pajamas for this. 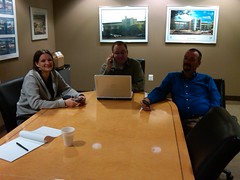 I spent the morning just doing my class.  Then during lunch I showered and got dressed as we have a busy afternoon.  I did my class right up to the last second and then we ran out to meet up with DevonIT, a thin client manufacturer in the Philly region.  That was a good talk and we got to sit with the CTO and get his thoughts on the future of desktop virtualization which was very interesting.

From there it was over to Blue Bell, PA to go to SpiceCorps Philadelphia.  This was our fourth meeting which is a pretty major milestone.  We met the posted requirements from SpiceWorks for our anniversary but they decided to add in new requirements that were not listed so this doesn’t count for us.

We had a really good turn out this time.  About a dozen people.  It was a really good group and we had a really good and diverse discussion.  The meeting ran for a few hours and then several of us went out for dinner at a local diner afterwards.  We ended up being out quite late until around two in the morning.  Jeff bailed on us and just went home after the meeting.  Tomorrow is our big day so we all need to get some sleep tonight.