Today the driving begins. Another long, long stretch of blacktop stretches out before me. I can’t believe how much driving I am doing this week. This is definitely a life record for me. In total, not including the extra several hundred miles that I have not figured out when I am going to do yet to go to Houston to pick up Dominica and Liesl, I am going to have driven approximately 4,400 miles or 7,100 kilometers in about eight days!

We were not up all that early this morning.  Sleep was more important than an early start.  We are cutting the drive to Texas in half which makes it not really all that bad, considering.  Driving from Chalfont, on the north side of Philadelphia, to the west side of Nashville should actually be quite easy. 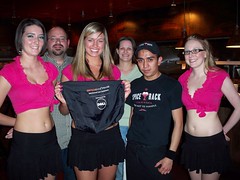 I don’t know exactly what time we got onto the road but I am guessing that it was around ten this morning when Jen and I headed out the door from Tara’s house to start out journey south.  Jen is driving the Mazda and I am driving the BMW.

The weather was perfect today and we made awesome time as we worked out way south down towards Knoxville where we had scheduled to meet up for dinner and to get our picture taken at the new Spice Rack Cantina which is a new restaurant in town.  SpiceWorks is running a photo contest for the Spiciest photograph and we are guessing that that can be had by stopping in there.  We have our SpiceWorks nylon bags from SpiceWorld 2009 to use for the photo.  We figure that there is no way that we can lose with a picture from there.

We got into Knoxville pretty late considering that it was a Sunday and we were definitely worried that Spice Rack would be closed by the time that we got to it.  It was not although it was quite slow and seemed like it would not be open for much longer.  We got dinner there and then asked the crew if they wouldn’t mind getting a picture with us for our competition.  They were happy to oblige and when the picture was posted to SpiceWorks we were told that we pretty much have the competition in the bag, so to speak.  It will certainly be hard for anyone to beat out this picture for the spiciest SpiceWorks picture!

After dinner it was back on the road for several more hours.  We drove through Nashville and started looking for a hotel on the far side so that when we hit the road in the morning Nashville would be behind us as would its traffic.  We ended up finding a Comfort Inn in Dickson, Tennessee which was very cheap and worked out great.  Tomorrow night I will be home in Dallas.