I got up this morning unaware that a tropical depression slash hurricane was expected to be pounding the metroplex.  I had gone to bed with the weather being completely normal.  I had spoken to a friend in Austin yesterday before leaving work and he had been saying that they had gotten four inches of rain yesterday but I really did not think very much of it.

When I looked out the windows this morning, it was pouring.  And I mean pouring.  It was torrential.  Quite literally, this is what a torrent is.

I drove to work and was completely drenched by the time that I reached the front of the parking lot.  The lot is quite large and you always have to walk quite a long way to your car.  I was seriously wet.  Then, just in front of the office, there was a massive stream flowing through the parking lot with no way to get across it.  So I jumped the best that I could but still managed to completely soak both feet.  It is going to be a long day, I can tell. 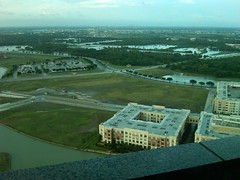 All morning it was freezing cold in the office because I could never dry out.  My feet were wet all day.  A lot of people did not make it to work and those that did were very late as they fought traffic that was moving so slowly all over the metroplex.  Accidents everywhere.

My lunchtime there was already significant flooding in the Dallas area with police using helicopters to rescue people stranded by the floods.  The rain had let up some so I ran to Taco Bell and picked up lunch for the family and brought it back to the apartment to eat.

It continued to rain all afternoon.  I worked late today not leaving the office until six thirty which is when our dinner reservations at La Cima were for.  Oops.  We did what we could to get over there but we ended up eating at more like seven thirty.  It worked out that I was working late, though, as Liesl was still asleep until just as I was leaving the office.

When we got to La Cima we learned that tornadoes had touched down very near by at the corner of Irving and Mockingbird and had destroyed a warehouse there.  There was a ton of flooding all over and the Trinity River was close to breaking its banks which would be disastrous.

The drive to La Cima down Riverside Drive was pretty amazing.  This was the second heaviest flooding I have ever seen – the worst being when the riving in Binghamton broke its banks and the whole region was wiped out several years ago.  This was very similar though but without the obvious devastation.  There were whole trees underwater.  The park along Riverside was just gone.  The buildings in the park were just rooftops.

From the dining room at La Cima, the Skyline Room, there was  a really good view of the flooding and I could see all over Irving and Las Colinas that there was a lot of ponds and rivers where there had not been any previously.  It was amazing to be able to look out and see a flood happening in real time.

We had our regular, Wednesday evening pasta night tonight.  Brian Watson joined us, or we joined him – he was at the bar hours ahead of us since we were running extremely late.  Tonight was shrimp cream, but a different shrimp cream than we usually get.  It was almost a vodka sauce tonight.  It was quite good and I was glad for a change of pace, even if just a minor one.  Every little big helps.

The wine flight tonight was really something special.  It was Tuscan wines with a pinot grigio that I like but was not crazy about but then a Santa Cristina Sangiovese and a Principe Corsini Don Tommaso Chianti that were simple unbelievable.  It was the best flight that I have had yet at La Cima.

On our drive home from La Cima, we swung over to the post office to send out some mail and then, on our way back past the club, Dominica and I saw our first, real, live, in the wild armadillo!  That was very exciting.  We have seen them in the zoo, of course, as everyone has.  But it was really neat seeing one actually just running around on the side of the road.  At first I thought that it was a possum but realized that it was shaped differently and armored when we got closer.  It was much, much larger than we had thought that an armadillo would have been.

After we came home, Liesl went into her room and watched Diego while Dominica and I watched a combination of Rick Steve’s Europe and House Hunters International.  I ended up working from my laptop and there was a lot to do so Dominica was up until around two in the morning and it was pushing three in the morning when I was finally able to take Oreo out for his last walk and get to bed myself.

We had a really restless night, though, as Liesl was up by three thirty and a few times after that and finally around four thirty we decided that she needed to come into bed with us as she was just unable to sleep.  She did not do much better sleeping in our bed, though, and so no one got much of any sleep tonight at all, including poor, old Oreo.