I got up nice and early this morning around seven and got right to work.  Did a couple hours of work until the girls got up.

Our Farmer’s Branch Library cards needed to be renewed and today seemed like the perfect time to do it, so as soon as they were awake I hustled them out of the door and we raced down to the library and took care of our renewals, which is super easy.  We use that library all of the time as that is where my digital books, audio books, and MangoLanguages come from.  So we use it heavily.

On the way home, we stopped at Pupusa Dona Lola in Farmer’s Branch for some authentic pupusas for lunch.  I haven’t had one in many years, and the girls have never had them.  Luciana did not want to try one, but Liesl was excited to try something new.  We had time, so we stopped in and got them to go.  So cheap, less than four dollars for two with the trimmings.  We got them with beans and cheese. 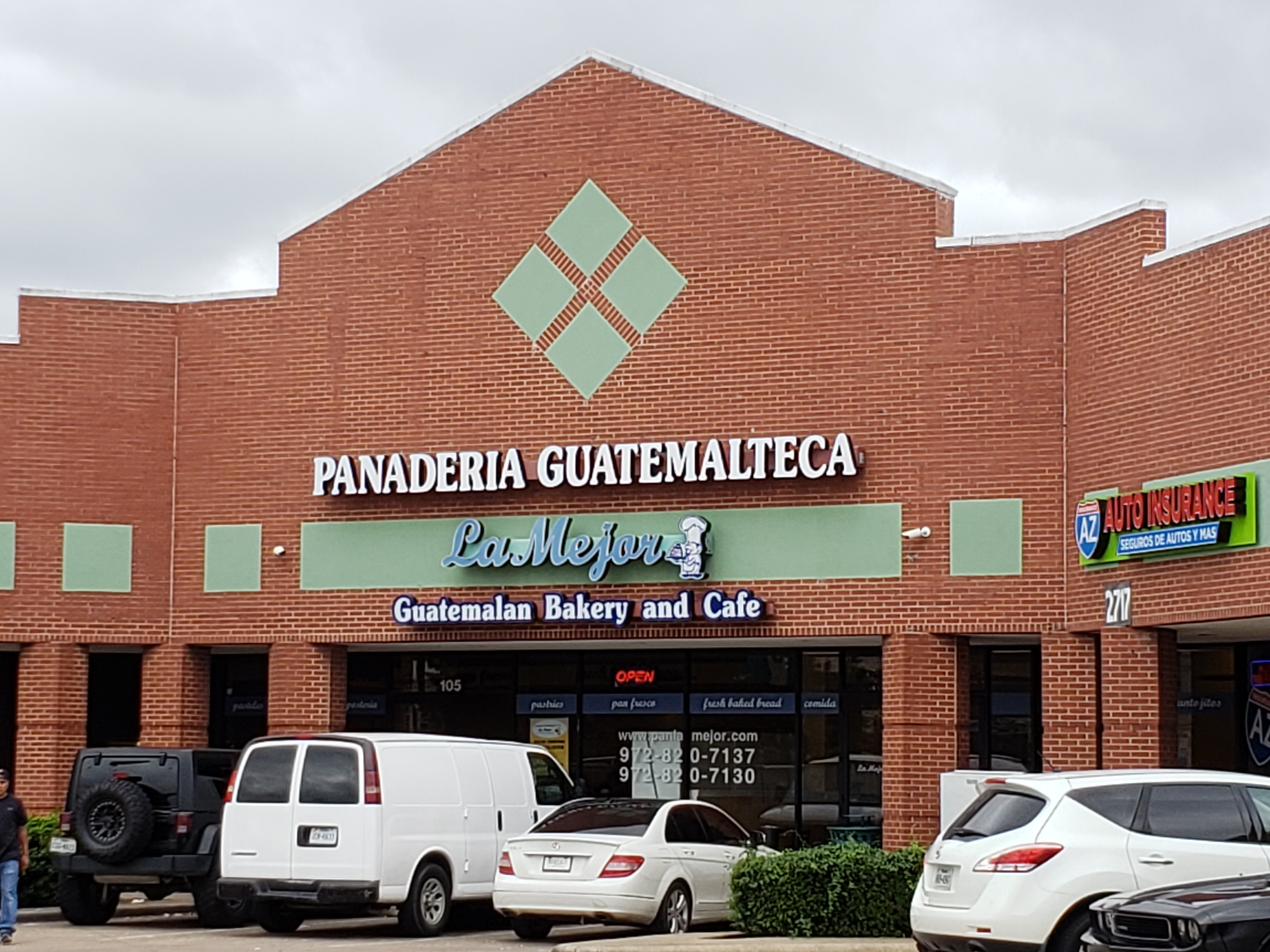 Then we swung into La Mejor, the Guatemalan panaderia on Beltline.  The girls were super excited when they saw all of the baked goods and I let them get two each.  They were so excited to find this place.  They wanted to get everything.  I can tell that they were influenced by their time in Nicaragua.  They were right at home with all of the selection here. 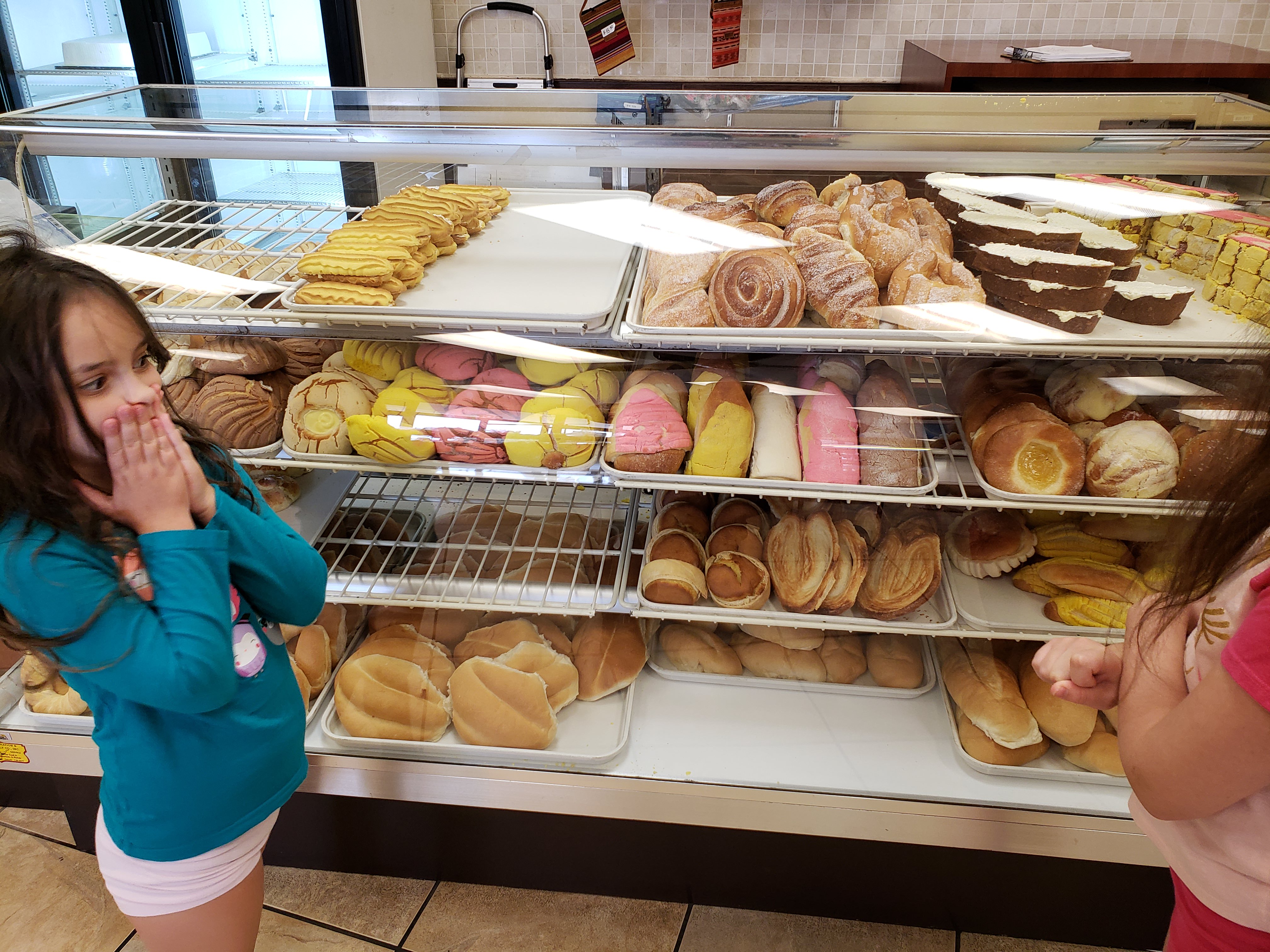 Everything was so cheap, too.  Barely more than we would have actually spent had we been in Central America.  A great bargain, we will be back to both places for sure. 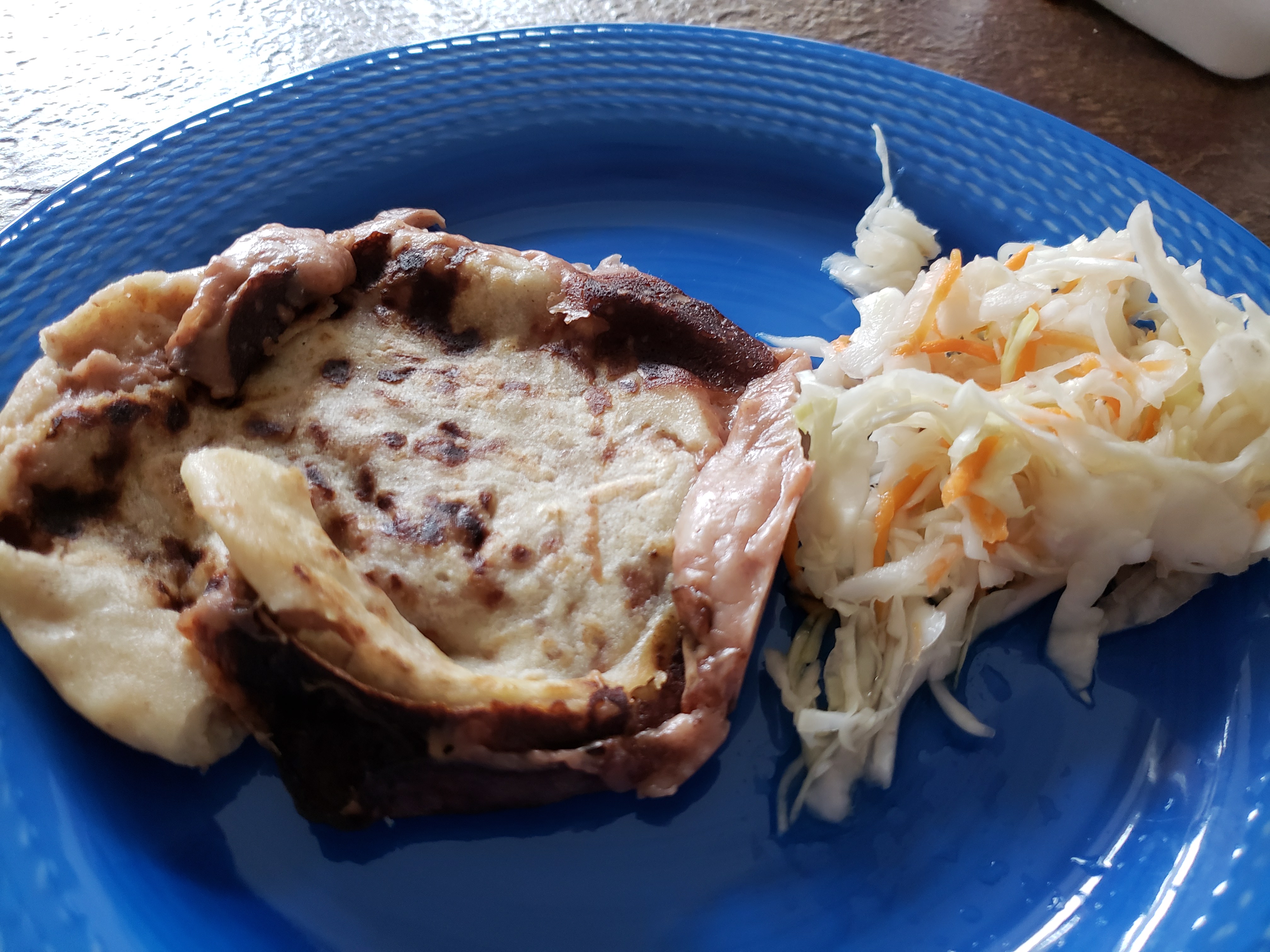 From the panaderia, we drove right back home as I had an up coming meeting to get back for around noon.  I ate my pupusa before the metting.  It was excellent.  I miss having these. 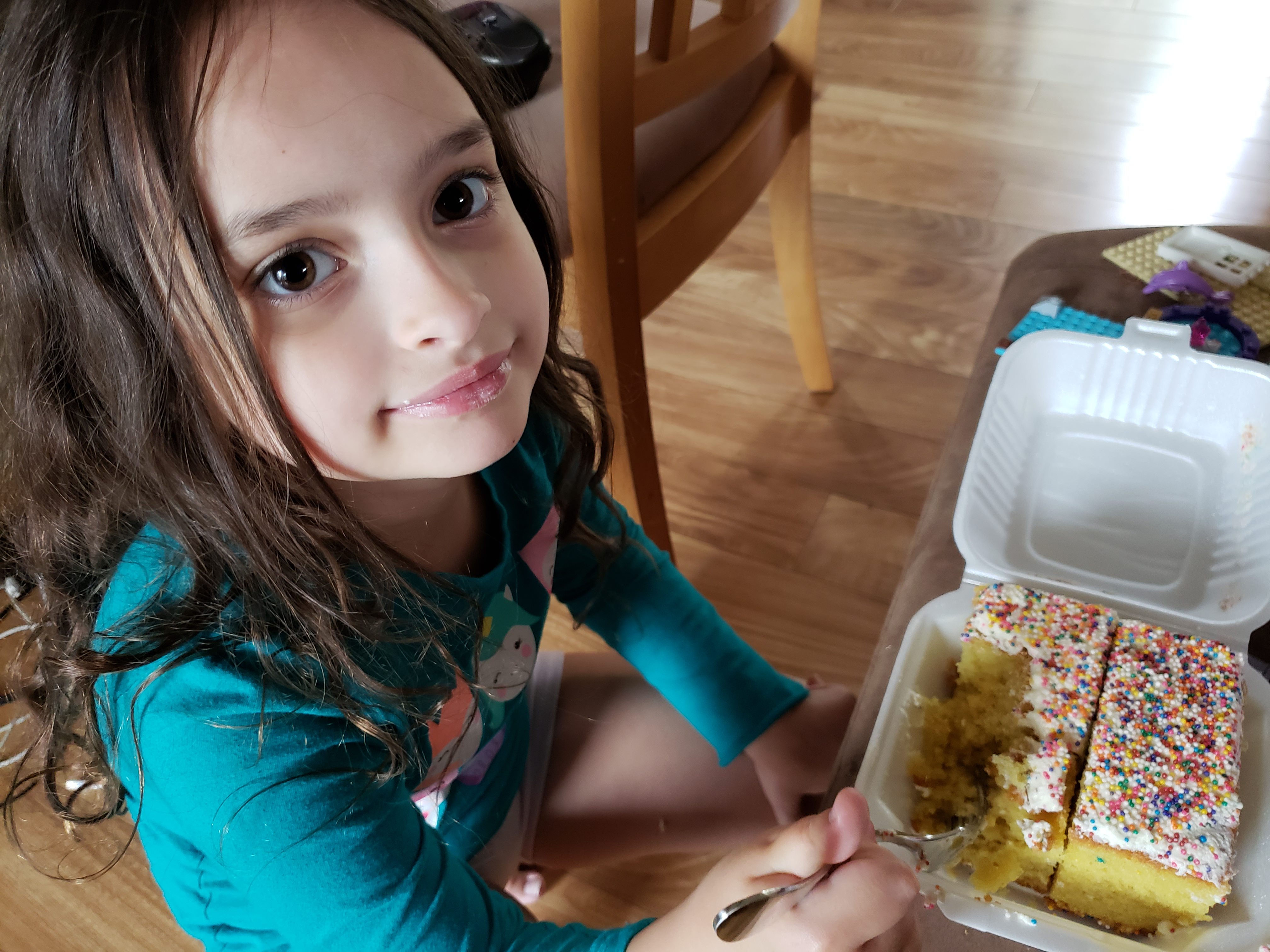 Luciana dove right into her cake and said that it was great.  She really liked it. 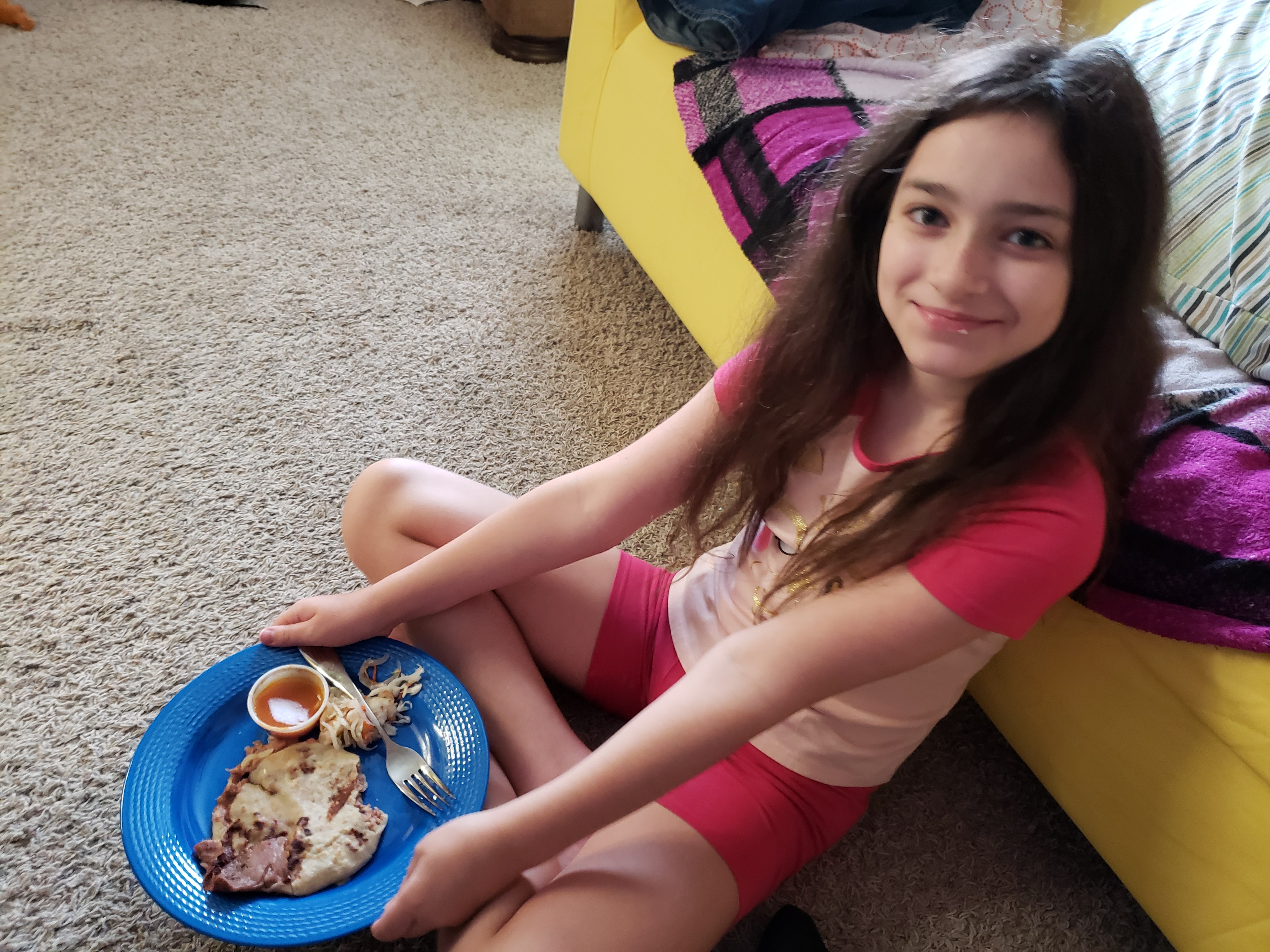 Liesl loved her pupusa and the spicy cole slaw that comes with it.  She ate the whole thing.  She liked how spicy it was.  This trip made for a very happy family.  And both stores together came to only seven dollars for all of that food! 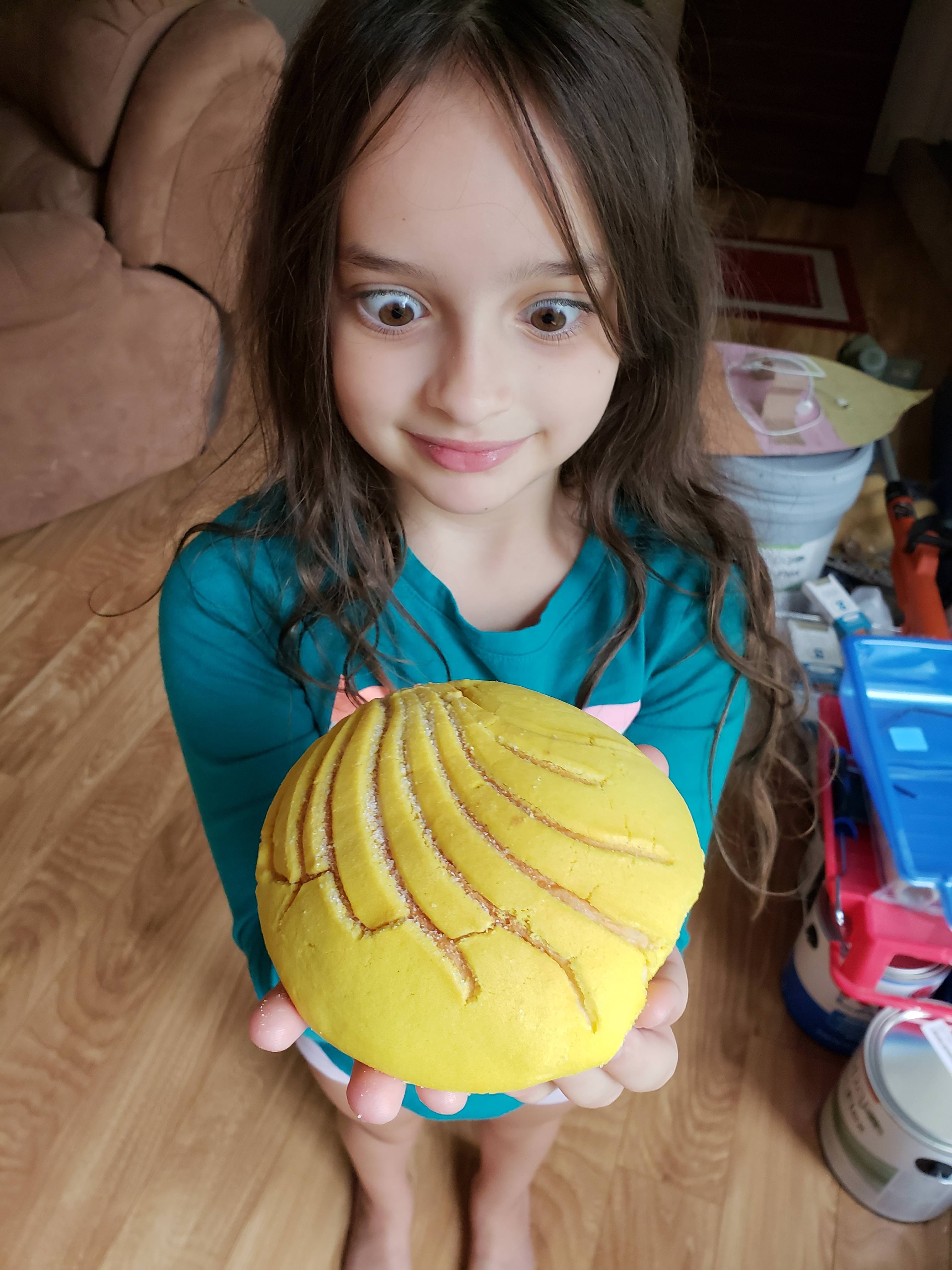 In addition to the cake and pupusals, each girl picked out a concha.  Luciana, of course, got a yellow one.  And Liesl had to get a pink one.  There were a lot of smiles this morning.  This was a very successful trip to the library and for some food.  I discovered a few places that I really want to check out in the future, too.  Especially Monica’s Cafe, a Salvadoran diner nearby to us.

Once back to the house, it was straight to conference calls, one after another for a couple of hours.  So my day got to be quite busy.

The girls had a nice day.  They were thrilled with the morning’s activities, and then came home and played Portal Knights together for some time after they had eaten their food.  They are loving all of the natural light in the house, too.  I can tell myself that having the house so clean and bright, since I spent so much time yesterday cleaning before the kids even got up, is making me feel so much better.  I miss natural light when I am closed up for too long.  And having the house be a mess always drags me down.  It is still a mess, but at least things like the bar and kitchen are clean.

The afternoon was decently busy.  The girls did a great job of just hanging out with each other and playing really well.  They played with Playmobile or something similar all afternoon.  They were in the living room so I could hear them the entire time.  They are so adorable.

I ended up needing to work until eight this evening.  Mostly on the phone.  Once I was off, Luciana requested that we have pizza tonight.  We didn’t have any other plans, so I agreed and ordered Domino’s.  I decided that today would be my first real diet skip day in two months.  By this point, I’ve earned it.  So I got myself a thin crust pizza, too.

Liesl asked if we could watch some more of The Chamber of Secrets while we ate our pizza.  So we made it another Harry Potter evening.  We finished Chamber, which was already near the end, and started watching The Prisoner of Azkaban, too.

It was a very good day.  The girls and I got a lot of quality time together and did a lot of fun things.  Both girls were super happy with the day.  They had a great time between the library, food, getting to play, nice weather, pizza for dinner and family movie night.

During the second movie I needed to stay back into the office to run some Sage updates.