Wednesday, and the last day of SpiceWorld 2018.  I got up and got over to the conference at a good time this morning and put in a very busy morning of talking to vendors and Spiceheads non-stop.  It was an exhausting morning.  My feet and back were really hurting after a few hours on the hard floors.

I was in such a hurry this morning that I intentionally left my phone behind at the apartment to charge and went to the conference with no device on me!  This probably actually helped me to stay focused. 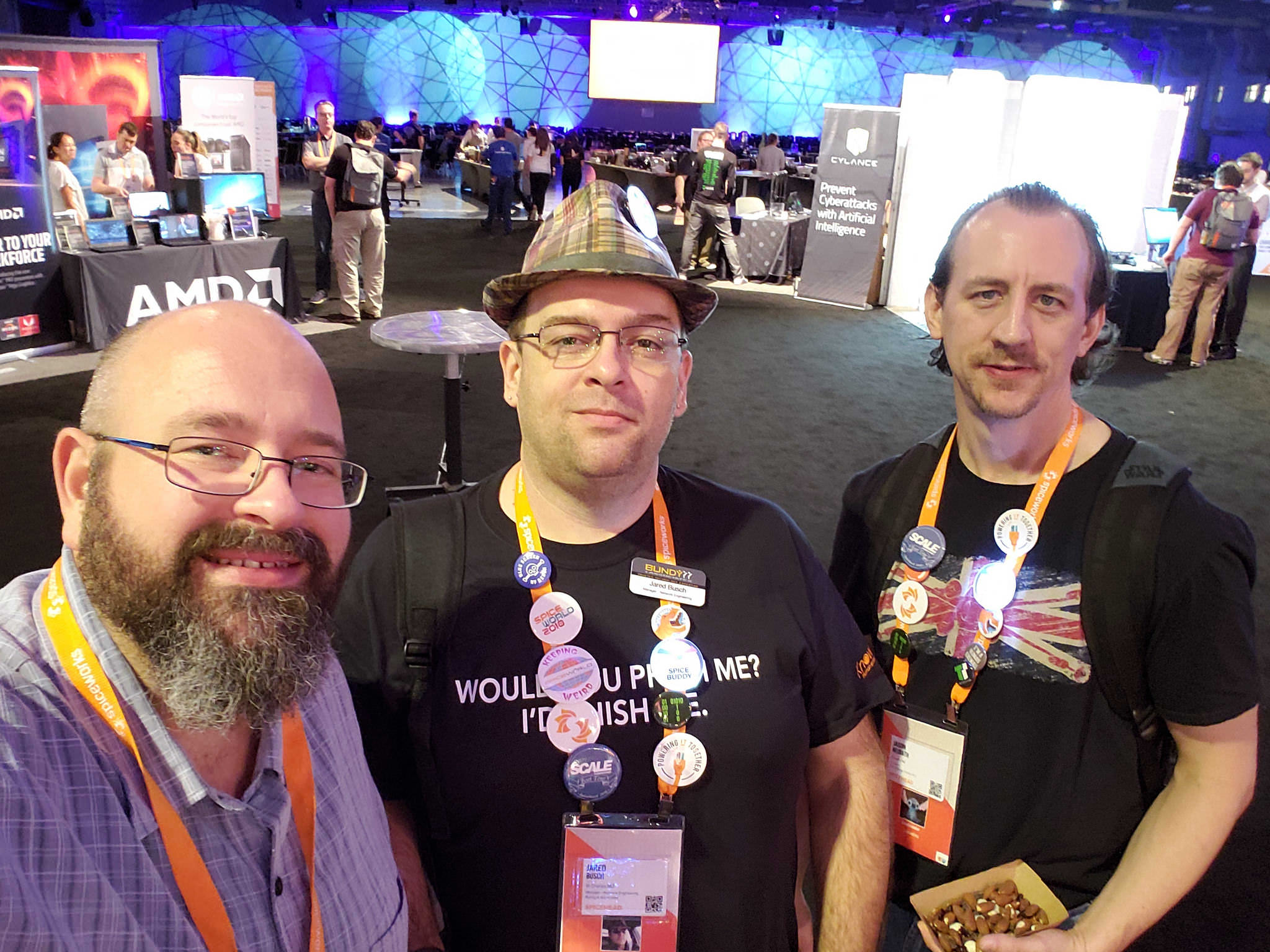 It was an exhausting, but productive morning.  Paul brought my phone by around eleven thirty.  Then he went back to help back and get out of the apartment.  We have parking all day, but the apartment only until noon.

I got to a late lunch today, well after most everyone was done.  They had a decent vegetarian lineup and I ate well. It was my only big meal at the conference. 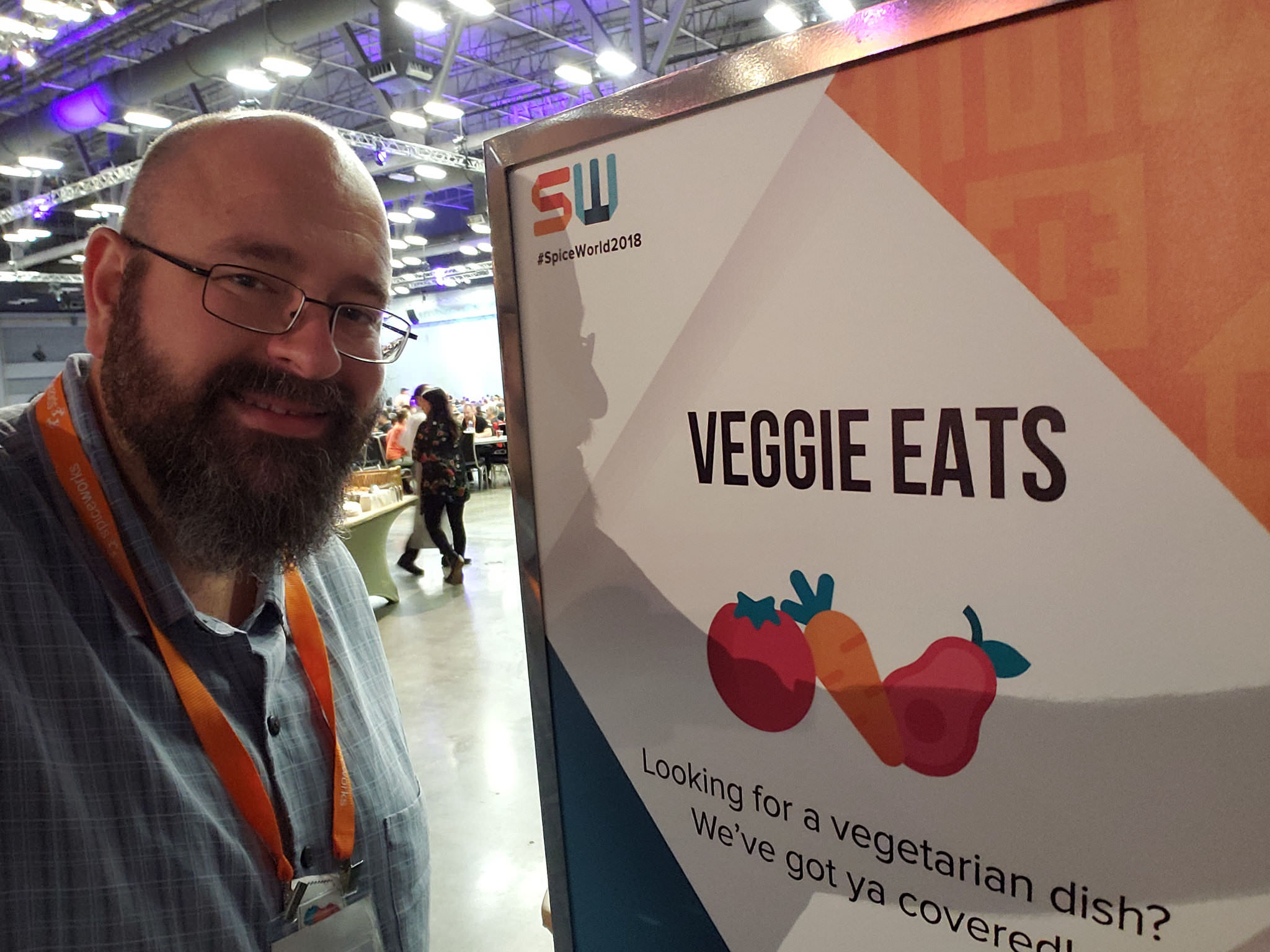 Dominica took the girls out for lunch at IHOP today.  Then they stopped by the conference after they had eaten, and came in to see what it was that I had been doing all week.  They were not there for very long, though.  Maybe ten minutes.  But they were there long enough for Scale to invite them to come on the boat cruise tonight.  So we got ourselves “tickets” for them, and changed the day’s plans so that they could go.  This will be way more fun for everyone.

From there, Dominica took the girls to a kid’s interactive museum in Austin and spent the afternoon there with them doing educational activities.  The girls had a great time.  They did not want to leave to come back to do the boat cruise.

My afternoon stayed busy.  I talked to loads of people, met with tons of vendors, and eventually found TJ whom I had been looking for all day and we got maybe fifteen minutes to sit and talk before we had to head to different events.

The event ends early on the “third” day, so before four the vendors were all packing up.  This is one flaw I feel with the set up of this event, it gets started so late and wraps up so early.  It needs one or two more hours of “meat” stuff on the last day, but the vendors are all anxious to run away.

I went to the happy hour to get some drinks and help to coordinate people getting to the boat.  I got some sweet AMD swag at the happy hour with two silicone wine “glasses”, and a cool beer opener.

I led Brian, the one person that was waiting for me to direct them, to walk from the conference center to the Scale Boat.  It never seems like it is going to be that far, but the walk is really far and my ankles were burning by the time that we got there.

We were on time for the boat, but too far back in the line.  I had to get called to the front to make sure that I got onto the boat, so jump the line to dozens of people chanting “Scott! Scott! Scott!”.

Paul and I sat upstairs on the boat.  Dominica and the girls sat downstairs for a while, but eventually came upstairs to join us after we had dinner. 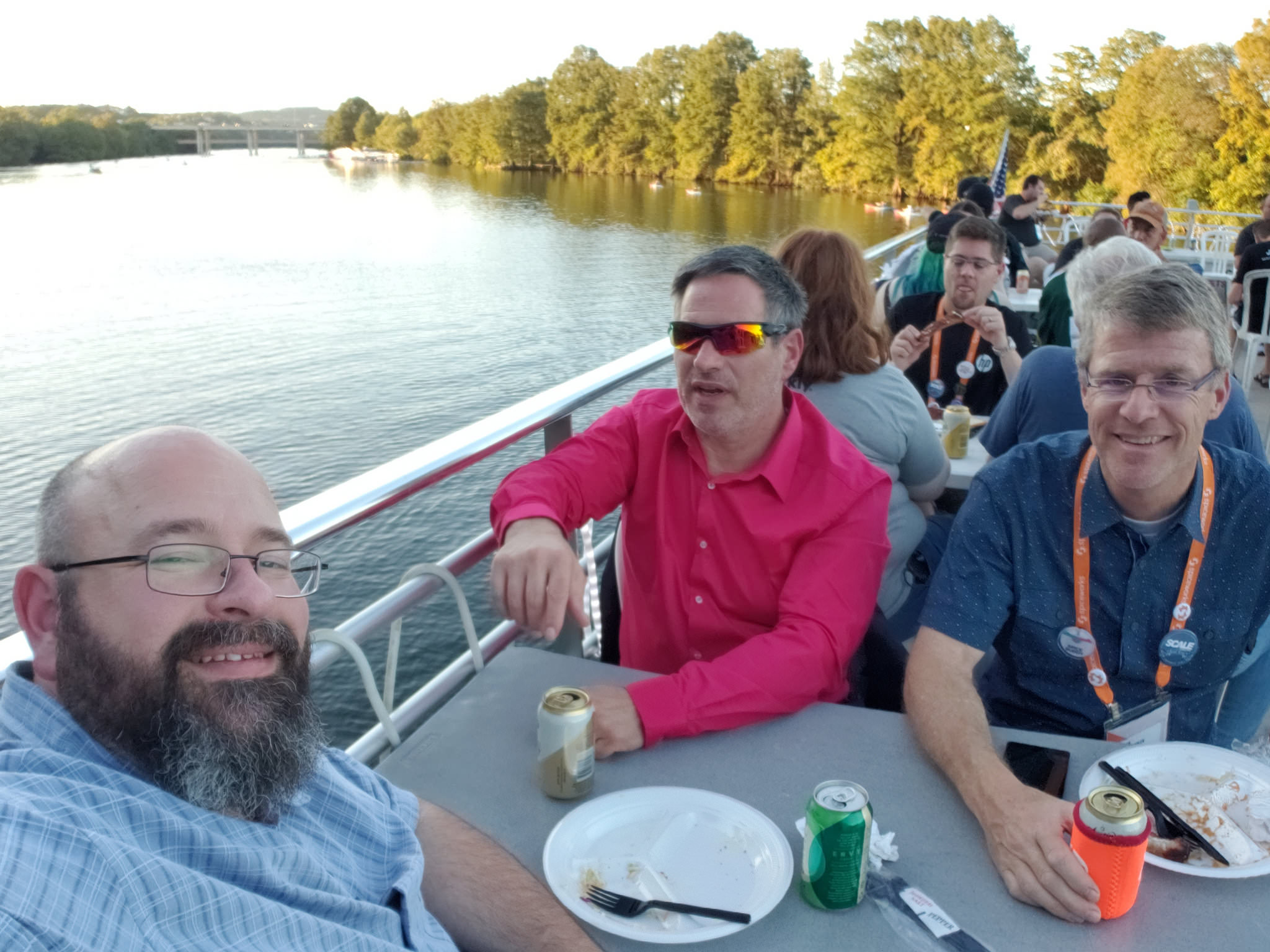 None of us eat BBQ, so we have to make due with the sides.  Liesl invented a new vegetarian meal, called “The Liesl”, which is a sandwich with potato salad and pickles.  It is surprisingly good, actually!  I had two of them. 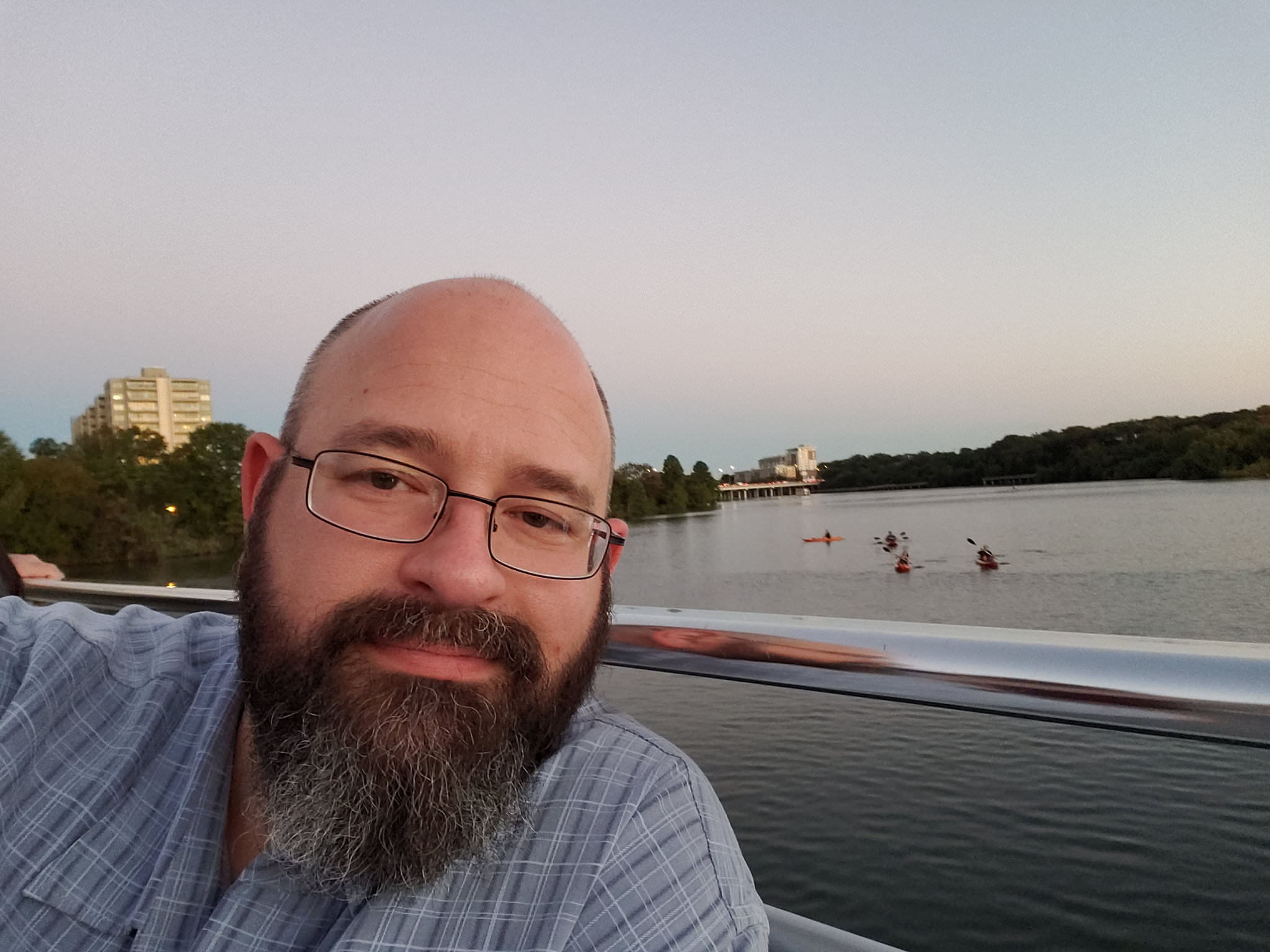 The girls had fun on the boat ride.  And we had the perfect night for stopping to see the famous Congress Street Bridge Bats.  We must have seen hundreds of thousands of Mexican short tail bats fly out.  It could not have been a better viewing night.  I have done this boat for six years and never seen this many and seen them so clearly. 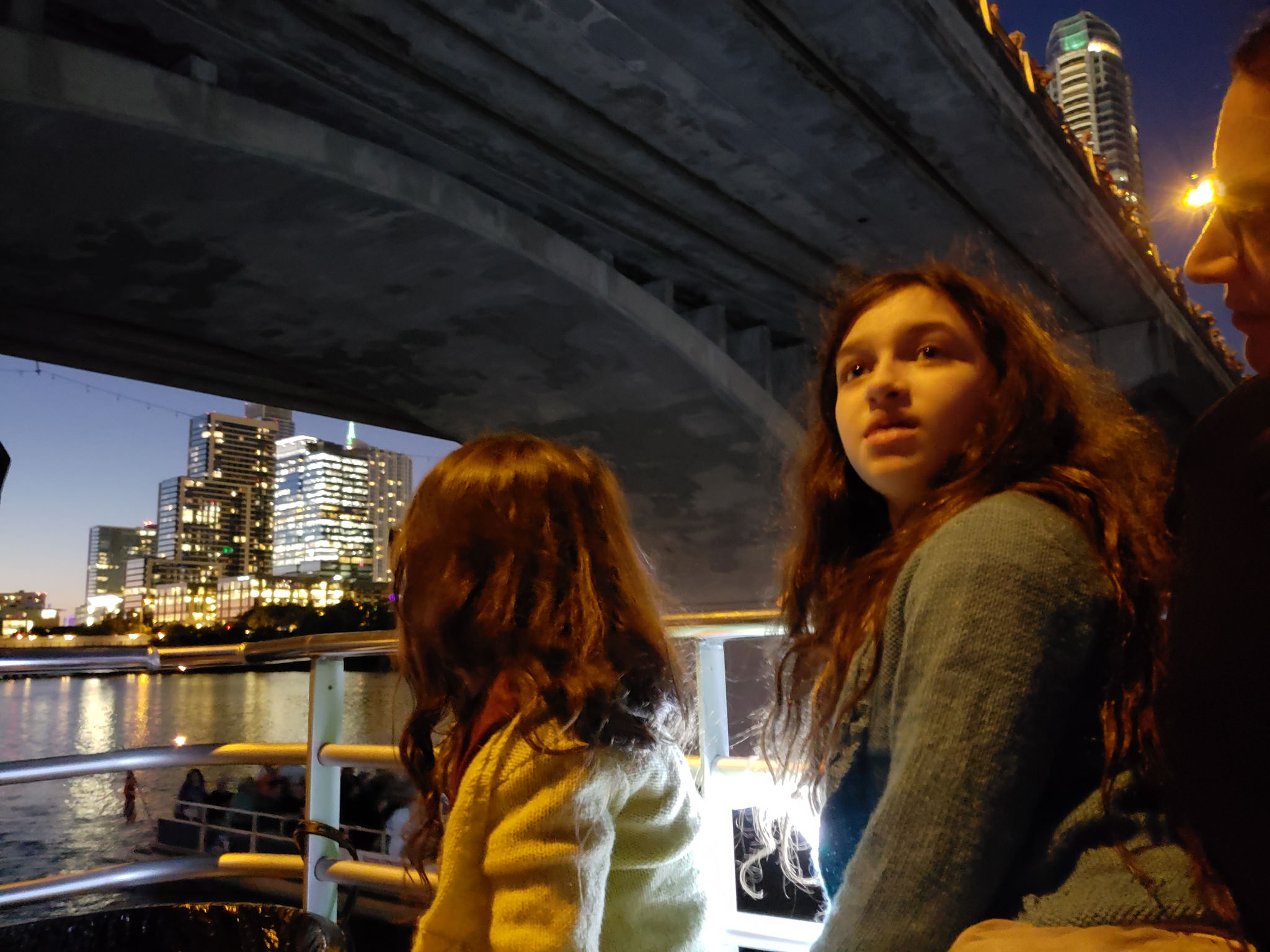 The girls watching the bats come out in Austin. 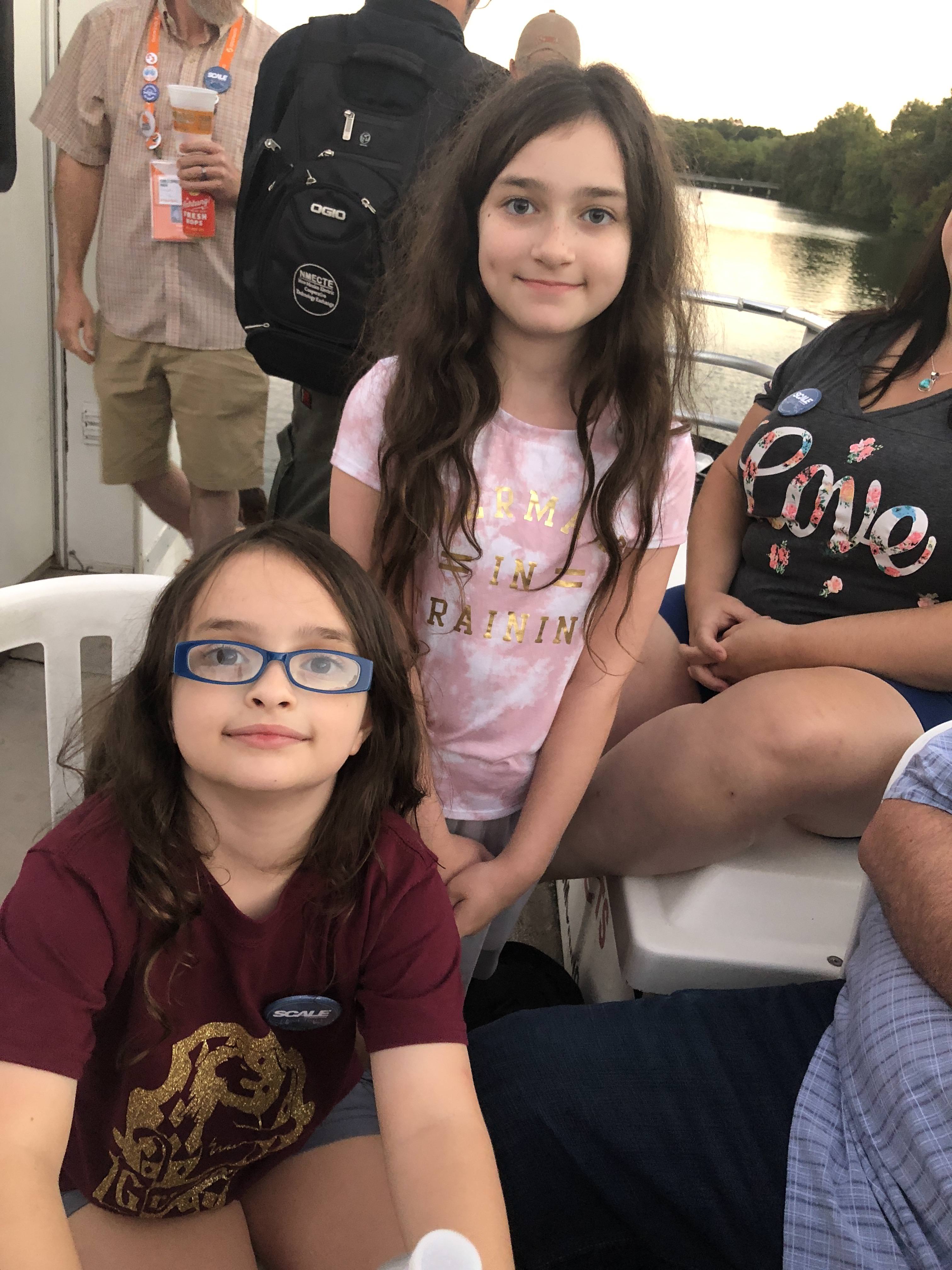 Handily, Paul had parked the minivan by the boat, so we decided to just go from the boat to the minivan and drive straight back to Dallas from there so that we would be home at a good time and not be overly exhausted.

The girls had an awesome day.  They really had fun, other than the drive home.

We got home just before midnight.  Rachel had texted me on the way back and asked me to go out tonight.  So we got home, unpacked the car, and almost immediately Rachel and Bohdan picked me up and we went up to the Fox and Hound and played pool till the bar closed.  So it was a super late night for me, I will be paying for this tomorrow.