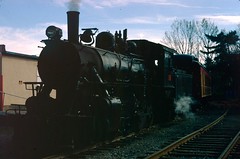 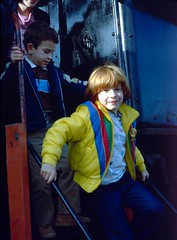 One of the most exciting things to children of my era is spaceflight.  One of the great disappointments of having been born in 1976 is that the National Air and Space Administration, NASA, ceased manned spaceflight on July 15, 1975 with the Apollo-Soyuz Test Flight.  It was an era still immensley interested and passionate about space flight.  Every kid talked about wanting to be an astronaut when they grew up and space flight was a very common topic of conversation even amongst adults.

To put the era into perspective, the first manned space flight by Russian Cosmonaut Yuri Gagarin happened exactly twenty years ago today.  In the past twenty years all of the Mercury, Gemini, Apollo and Skylab missions happened – and that is only the missions sent by the United States.  The space race had been under full steam with the US and Soviet Union constantly working to one-up the other in space capabilities.  The space race was so present in everyone’s mind during my childhood that it never occurred to me that it was even a “thing”.  The space race was just a matter of fact and it seemed as though it would last forever.  Our goal was to create galatic starships for deep space exploration, colonize distant planets and create a massive stellar navy whose goal was to protect us from whatever was out there and, of course, the Soviets who would have a navy up there as well.

It all seemed pretty obvious in 1981.  First we put a man in space in 1961, then we orbited the earth, then we set foot on the moon and then we built the first spacestations, the Skylabs.  My father had even worked on the Manned Orbiting Laboratory project while at Kodak as an electrical engineer.  My entire life had been lived during an era when everyone talked about and thought about space travel and exploration and we had all been waiting for the next big thing – the reusable space shuttle.  The space shuttle project had begun in 1975 and, thus, had been underway for my entire life.  The leadup to today was something spectacular.  There was probably no event in my young life for which I had more expectations.

The launch was televised and scheduled for seven in the morning – long before a barely five year old kid tends to get up, especially one who has not started kindergarten yet.  I probably got up around five thirty this morning just to get ready.  There was, of course, non-stop coverage on television as there was little else to show so early in the morning.  It was a momentous occassion and America was watching – as was the rest of the world.

I sat on the vinyl loveseat in my parents’ upstairs bedroom in the old farmhouse in Peoria, New York watching the launch on the tiny, thirteen inch black and white television that we had there.  It was my first live launch of any sort.  For the next few years, watching the space shuttles launch would be an important part of my life.

At seven we watched the countdown, T minus… and then it launched.  It was amazing, a defining moment of my childhood, one of my great memories of this age.  America was in space again and this time our spaceship was not a one shot, fall to earth, burnup on reentry deal.  We had a ship that would travel to and from space with a crew who were able to move about the cabin and even bring payloads with them.  Space travel had just changed significantly.  Flight STS-1 was underway.

Finally, we were in space again and I no longer had to dream of space exploration with nothing more than stories of space flights which, to my young mind, seemed long ago in the distant past, even though many of them had happened in the past fifteen years.  The space race was something in which I could now participate as an active observer and not something about which one could only read of historical triumphs.

Today, I am eleven months, and five days old. Less than a month until my first birthday. While I do not remember anything of today’s events, this is a day that my parents would talk about for much of my life.

“The Blizzard of ‘77 got underway in Western New York —the start of a five day event that shut the region down. Snowfall totals reached 100 inches in some areas, wind gusts peaked at 69 MPH and snow drifts towered 40 feet high. The devastating winter storm resulted in 23 deaths in Western New York.”

This was one of those weather events that coloured much of my life. I always heard about it and how scary it was being the first winter for our family on the farm in Peoria.

This is where it begins. A cold winter night in Irondequoit, New York at Rochester General Hospital. I was born and the story of Sheep Guarding Llama begins to take shape.