Today’s quote comes from Blaise Pascal: “Truth is so obscure in these times, and falsehood so established, that, unless we love the truth, we cannot know it.”

I got home from work last night and Dominica and I went right over to Food for Life and got our dinner. I am FFL deprived after last week having to skip my regular Thursday and Saturday meals there. We also made a quick trip to FedEx-Kinkos to send off my Mazda 6 key fob to dad so that he can get a new battery put into the “6”. The car has to have the fob so that you can turn off the alarm when you put in a new battery. It is a weird security feature I guess.

We came home and watched Material Girls with Haley and Hillary Duff that Dominica bought the other day. She has been wanting to see that movie for a while. It wasn’t very good. It was okay – I didn’t want to shoot myself or anything, but there just wasn’t any plot at all. It was written like a bad episode of a low rated sitcom that dragged on for an hour and a half. It wasn’t funny, it wasn’t dramatic, it wasn’t intelligent and there wasn’t any action. Just absolute blah.

After that it was time for bed. I am still recovering sleep from last week and I am not able to stay up very late yet. 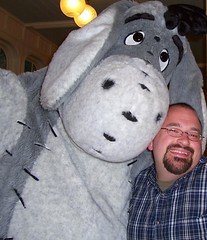 This morning I was up and moving and out the door at a pretty good time. I was very proud of myself and was going to be into the office at a very good time which is always a challenge for me. But the moment that I got onto the highway I discovered that traffic was moving like molasses. It took me almost an hour and a half to get into the office! Normally it takes just under half an hour. I was never even able to figure out what was wrong this morning either. Traffic was just stop and go everywhere for no apparent reason.

The latest version of Pinnacle Studio is out today. Just two months or so after dad and I both bought version 10 now 11 is out. I will probably upgrade because it works with Vista and has some new features and I am a big believer in keeping up with software upgrades when the discounts are deep (and they are – 50% of the retail price.) So maybe I will be getting that. I have been using Pinnacle Studio 10 a bit. One of the few commercial software packages that I use with any regularity.

We tried to talk Francesca into letting us take the girls to Disney World in two weeks but we couldn’t convince her. We tried to get both her and Bennie to come along as Bennie has never been there at all and Francesca hasn’t been there for fourteen years but they are waiting a year or two (they say) before they go but then they will go during the summer when the park is really busy and really hot and more expensive. I had to note this here so that in the future when Madeline and Emily look back and read this they will know that we tried, for several hours, to convince their parents to let us take them to Disney for three days. 🙂 Just in case they wonder why we never took them anywhere.

Dominica and I are planning on going down to Edison tomorrow night to have Indian food with friends that live down there. Oak Tree Road is considered to be “the” place for getting great Indian cuisine so we are looking forward to checking that out. We have been trying to get together for weeks but Dominica and my schedule is just so busy and we are never around on weekends so it is very difficult to get together with anyone.

From Raymond Chen: People didn’t answer your first email for a reason.

I fired up CentOS 5 (Red Hat Enterprise Linux Advanced Server 5) today for the first time. The CentOS rebuild of RHEL 5 has only been available for about a week now and I have been looking forward to seeing it in action. I use RHEL 3 and 4 extensively at the office and RHEL 4 (via the CentOS rebuild) extensively at home as well. New versions of RHEL don’t come out all that often so it is exciting when a new package becomes available. I have been waiting for this too because I am planning on installing it to run my main MySQL instance on.

We are booking our Disney weekend (read: mini-vacation) today. We are flying out of Newark on Thursday night and flying back on Sunday night. Thank you to AirTran for making weekend trips to Florida affordable. We also decided to make a little Disney World investment this time down and buy ten days of non-expiring tickets instead of just three days for this one trip. We are very likely to be back fairly soon and the cost per day of ten days is so much lower than the cost for three days that it is totally worth it. That means that we could take three three-day weekends like this one and still have a spare day. It makes going to Disney a lot easier down the road.

One thing that makes the “all Disney” vacation cheaper than if you do the “alternative” accommodations option like we did the last time that we came down is that Disney handles all of the ground transportation for you while you are in Florida. They pick us up from the airport and drop us off and take us directly to the hotel and everything. And it is all included in the room price. During a short stay like this that is pretty significant. That could easily be $100 of the cost right there and the last time we were down the car to take us to the airport never arrived or called and we could easily have missed our flight. So we will really appreciate that this time.

We are definitely taking cameras and the camcorder on this trip (we didn’t have the camcorder until a few months after our last trip) and the plan is to do more podcasting this time down. We had such a good time doing the podcast last time and so many people were following along that is was just a lot of fun. So we will be doing that again and hopefully with plenty of video and pictures as well.

We are spending all three night in the Animal Kingdom Lodge in a Savannah View room. This will be the first time that I have stayed in Disney is a premier hotel since I first went with my parents in 1987 and stayed at the Contemporary Resort near the Magic Kingdom. This is Dominica’s first time staying in one of the Disney premier resorts. This will be my sixth time going to Disney World and the fifth time that I will be entering the parks. Dominica will be going for her third time.

There are some changes in Disney that we are excited about. On our last trip The Living Seas was closed for renovations so we didn’t get to do that. Now it has been replaced with The Seas featuring the cast from Finding Nemo. So there is a new pavilion that we didn’t get to see in 2005 just waiting for us full of new stuff. And also in Epcot there is the new Gran Fiesta Tour featuring the Three Caballeros ride that replaces the aging El Rio del Tiempo in the Mexico pavilion. I liked the old ride but felt that it really needed to be updated and am very excited to have a chance to see what Disney has done with it. And, of course, there is the new Johnny Depp character in Pirates of the Caribbean that we have not yet seen. Also in the Magic Kingdom is the new Monsters Inc. Laugh Floor. But I doubt that that will be all that high on our lists of must see new attractions. In the Animal Kingdom there is Finding Nemo the Musical which opened last year. There would appear to be plenty to keep us busy on our three day weekend. 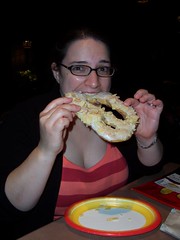 Now we have to work to remember all of the food that we really loved while we were there and we need to figure out what we missed that we really want to try. We only have a couple of meals to experiment with so we are on a tight culinary budget. Dominica remembered the sweet pretzels in Norway today. We definitely don’t want to forget about those. They were our favourite snack.

Dominica had a really busy today in the office today but mine wasn’t too bad. I got a chance to watch another episode of Floaters (I am up to eight of fifteen now) and to catch up on Rocketboom. She managed to get car appointments for both of our cars down in Newark to get into a shop to get inspected for our car insurance. That is such a pain having an insurance inspection. It takes so much to keep cars on the road. Inspections, registrations, insurance inspections, etc.

Dominica worked late tonight until six to put in some time because she is going in late tomorrow as she has to take Oreo to the hospital in the morning to get some follow-up blood work done.  We are planning on running out this evening to do a little shopping and to get some dinner then will probably just relax in the apartment.