Today is another start early day for me. I woke up on my own at five this morning after going to bed at eleven but stayed in bed until a little after five thirty. What can I say, Oreo is snuggly. 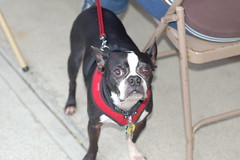 A few weeks ago Dominica sent me a video of the cutest pig ever and I didn’t get a chance to watch it until today. This is babe the pig from Australia. It is hard for me to see pigs because it makes me so sad like knowing that lots of people eat them when they are so intelligent and friendly. Just like knowing that people eat dogs and cats.

Dad sent me a link to this YouTube video of Kodak’s Building 23 being imploded. This is the office building that my dad used to work in. I have seen this building many times as I used to go up to Building 28 “Theater on the Ridge” because that is where the Kodak Camera Club (KCC) used to be located down in the basement.

Dominica tells me that Drew ToothPaste is really funny but I haven’t been able to watch it yet so watch at your own risk – like eating black bean cake.

I was in to the office just a little before a quarter after seven. It was extremely warm in the office and I definitely can’t arrive any earlier than that during the summer or I have to spend the entire time figuring out how not to sweat.

Apple’s iPhone has been caught at Duke University performing MAC level denial of service attacks on the university’s wireless network. How is that for a reason not to buy an iPhone? Now that it has been publicized a wireless network owner can reasonably sue an iPhone user who brings down their network as a hacker and prosecute them under some pretty harrowing US laws (or lack thereof) that include long term imprisonment without trial. That is a pretty serious level of danger that Apple has placed, quite literally, into the hands of its generally extremely technically unsavy user base. While it is unlikely that such a situation would occur – now that everyone knows this is a great tool for causing some serious damage to companies and universities or your neighbour and just claim that you are a mindless Apple drone.

There is a new review of 1180 Raymond Blvd. today online and they mention the endless fire alarms and no, it wasn’t me! At first I was the only person upset by the fire alarms but now I have heard about it from a lot of people so I don’t feel so bad anymore.

I was expecting it but today turned out to be another very long day for me as well. It is going to be a very long week. My work from home day on Thursday has been canceled too. 🙁 Oreo will be very tired by this weekend. As, apparently, will I.

I ended up staying at work extremely late working on a major project that is not going well. It went from staying a little late into staying practically forever. It put me right back in DC working at Washington Hospital Center in the little Nicklin Associates office there. I would often get stuck working late into the night in that warm office with no one around just waiting to see data come in from the workstation in the autoclave area.

It has been a long time since I worked through the night all alone in “the office” whether it be here in Warren on down in DC or wherever. It has happened but it has become increasingly rare these past few years. It feels rather strange to be doing it now and yet so familiar. Late nights in the office, all alone, have been such a significant part of my adult life that if feels completely natural no matter how long it has been since the last time that I did it.

Since I had so much time sitting in the office just waiting for stuff I put in some time updating and adding labels, categories, tags and titles to my Flickr feed. My Flickr pics have been viewed well over four thousand times so far not counting me.

I ended up working until well after one in the morning!  It has been a long time since I pulled a double and this definitely qualifies.  It was an eighteen hours day!