I am really liking the site a lot more now that I am putting in little pictures from the SGL Flickr archives (and a few other random sources so don’t just totally assume that every random pic is necessarily from my collection – they are normally linked so you can follow them if you need to find out more.)

It’s Friday so I got to sleep in a little. Fridays are my days for working late so I don’t bother getting up as early or getting to the office as quickly. I appreciate the break between Thursday night and Friday morning. It gets me ready for Friday’s long haul 🙂 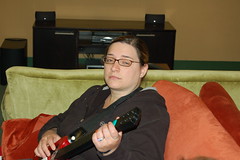 Dominica looks pretty serious (or hopped up on Nyquil) as she rocks out to Guitar Hero II in the 1180 Media Room.

Today wasn’t too busy and I got a chance to get caught back up with the SGL dailies as I haven’t had a chance to post since Tuesday night when I was stuck in the office all night.

Next week is going to be really long for me as I am going to be alone in Newark all week. Dominica is leaving a week from today to go to Topsail Island in North Carolina for the week with her family on their summer vacation and I am staying behind in Newark so that I can work. It will give me, I hope, a chance to get caught up with a lot of the little work here and there that needs to be done that is so hard to get done normally. Dominica is taking Oreo with her to Topsail so I will be very lonely! It is going to be a very long week for me indeed.

In order to prepare for Dominica’s trip to North Carolina which is quite the long drive we have to get the BMW 330 into a New York Inspection Station which is going to be a bit of a pain but I was finally able to make an appointment today and on Wednesday morning I will be taking it up to Spring Valley BMW just over the New York border north of Newark to get that completed. What a pain that is going to be. I have to be there at eight fifteen in the morning!

Most of my day was pretty slow. Things were very slow until I was going through the SGL logs, as I often do, and discovered people doing employment searches on Eric and finding really silly pictures on SGL. That was hilarious. I had to call Eric at work to see what was going on. We were dying when we realized what they were finding when they were searching on him. I knew that the SGL logs were entertaining but this is exceptionally funny.

There is always enjoyment in Pug Bowling. But nothing is as cute as a baby piglet.

I got home a little after seven tonight. Min had gone grocery shopping and had gotten home just minutes before me. We unloaded the groceries and headed straight over to Food for Life to ourselves some dinner. We haven’t eaten there in a while before they closed down for a week and it got us out of the habit of going over there. And the weather has been very hot and they don’t really air condition that place so it is always significantly warmer inside than it is out. Sometimes by twenty degrees or more. Today was one of those days. Almost chilly outside and extremely warm inside even with the doors open.

After dinner we came home but Jeffrey called us and then stopped by after his cell phone minutes ran out and so we ended up spending most of the evening talking to him out in front of the building on Raymond. We are meeting him and his girlfriend for a late lunch tomorrow around three. It was ten o’clock by the time that we got back to the apartment and we were both ready to just go to bed. Oreo was already in bed and very snuggle.