Dominica and I slept in a little late this morning and then got up and decided that we had nothing on the schedule for today so it would the perfect time to take our annual drive down to the Jersey Shore in the BMW 330. We had wanted to go two weeks ago but thought that traffic would have been so bad at that point to have made the trip not worth it and last week we were in Pavilion. It was almost exactly one year ago this week that we last drove down the Jersey Shore to celebrate having just purchased the BMW. 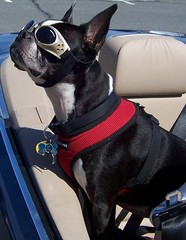 It took us a while to get out of the house as we were being very leisurely. We started by heading towards the Oranges and getting the BMW washed at the hand car wash up by UMDNJ. It has been a while since we last got a car wash.

From there we drove down the Garden State Parkway and cruised along the Jersey Shore for a while. Oreo just loves cruising in the BMW with the top down. He loves when we go slow along the ocean because he climbs onto the side of the car and hangs as far out as he can and catches all of the smells. It makes him very happy.

We tried going to a public beach area that allows dogs but the parking was completely crazy and there were just tons and tons of people so we decided to head father south and keep exploring. We went past a Charlie Brown’s Steakhouse which I have enjoyed eating at in New Jersey in the past (I used to eat at the Charlie Brown’s on Route 1 when I was consulting for Wegman’s because the restaurant was located inside of the Clarion hotel that I always stayed at) so we stopped there to eat. Min had never eaten at a Charlie Brown’s before. It was quite good. Dominica enjoyed it and said that we can go there again 🙂 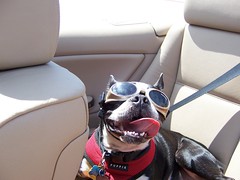 We kept driving south until we ended up at Island Beach State Park. That was a really nice drive along a preserved stretch of intercoastal sanddunes. We took Oreo for a walk down to the ocean and he played along the water but wasn’t too happy with the water caught him by surprise. It was extremely warm once we got out of the car, however, and we were all exhausted after our very short walk and very warm. We had wanted to have continued walking but decided that we couldn’t handle it and that we should just head for home. We wanted to keep the day as relaxing as possible.

On the way north from the park we stopped at Beaches and Cream and got some ice cream before getting onto the parkway to head back home to Newark.

All three of us were quite exhausted by the time that we got home and we decided to just take it easy all night. I uploaded our photos from the (as you can see) and we watched several episodes of Full House. It was a lazy night and Oreo just passed out as soon as we got home. All he did was eat his dinner and sleep. But he had a really good day and was very happy by the end of the day.

I am still on the early schedule (from now on but that was my segue in case you forgot) at the office so I need to be up very early tomorrow.  So it was off to bed early for all of us.