I woke up on my own around five this morning. It uncanny how I do that. 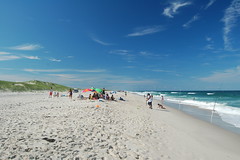 The sun was out today and you can barely tell that it rained for the entire day yesterday although the air is clearer than it has been and it isn’t so warm today.

Wikipedia has a very lengthy page detailing corrections that Wikipedia has made to Encyclopedia Britannica. Interesting indeed.

In our continuing look at cute pet pigs you have to check out the tiny Royal Dandies.

So my big personal project for the day is geotagging my Flickr images. Now that I have it working I am really excited about geotagging. Geotagging involves specifying the location where a photograph was taken. A few modern cameras are using GPS systems so that the cameras can record the geographic information right at the time that the image is originally taken much like they are recording lens, aperture, shutter, ISO, date, time and other settings now. But for my catelogue of thousands of existing images and for the foreseeable future I will need to encode my images geographically by hand.

By geotagging my photos you will be able to go through the gallery and instantly see where any photo was taken or you can search by the map to find photos taken at a particular spot. It is a great concept and is really making picture taking much more useful.

I ended up putting in a full ten hour day at the office today. The original plan was for me to do the semi-early shift this week starting just after seven all week. Then the plan was for me to do the real early shift at six thirty all week. But today that changed again and now I am working on Bahrain hours which means that I will be starting my days at three in the morning all week! Tomorrow I have to start early and then drive to Spring Valley for a car appointment at eight fifteen. It is going to be a very long morning.

I got home at five and worked on some geotagging before Dominica got home at six fifteen. She did some shopping today and picked up the seventh “Harry Potter” book. She had meant to buy Guitar Hero 80’s Encore Edition but was so excited about the HP No. 7 that she forgot about it.

Dominica cooked a pizza for dinner (with a whole wheat crust) and I watched Full House while working on my picture and Dominica read “Harry Potter and the Deathly Hallows” in which she is totally engrossed and doesn’t even know that I am here.

I wasn’t able to go to bed nearly as early as I would have like to have as I just wasn’t tired.  But at least I am not staying up late.  I have to be up at three in the morning but I expect there to be nearly nothing to do so I am hopeful that I will get tons of awesome geotagging done in the morning!  I am having a blast.  I love maps.  And I love photographs.  And I love web 2.0 mashups.  This is just all kinds of awesomey goodness!