My alarm went off this morning at 2:45 am. This is going to take some getting used to for sure. Luckily no one was already looking for me today so I was up in plenty of time. In fact, I even got a chance to do some napping throughout the morning. I have mastered the art of the ten to fifteen minute nap. Somehow I am able to consistently do that and wake myself back up to work when I need to. 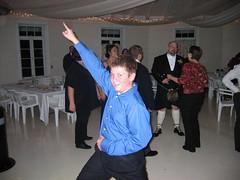 Today was not nearly as busy as yesterday was. That was awesome because I was pretty tired today. I can only get up this early for so long before it starts to take its toll on me and apparenlty my limit is about two days.

I got a chance throughout the day to get tons more images geotagged, cleaned up and scanned in to Flickr. I can’t believe how many photographs I keep discovering that have not been scanned in previously. I had thought that everything was in there until recently. Dominica and I also discovered hundreds of our wedding photos which were not developed until late December, 2003 which have never been digitized!

Today is Dominica’s last full day of work at her current job. Tomorrow she will be working a partial day and then leaving, with Oreo, for North Carolina’s Topsail Island. When she gets back in a week she will be starting at a new position with a new firm but still on the same corporate campus. So she is probably pretty excited today. Tomorrow Oreo will be staying home with me until I got to the office partway through the day and then Min will be picking him up early in the afternoon. She will be driving down to Virginia tomorrow night and then driving with her dad from there to Topsail on Saturday.

I worked another very long day today and did manage to squeeze in just a little housework. We watched some Full House and ordered in some Chinese from Golden City. It was a lazy night but I never really got to move away from my workstation.

At ten I went to bed and ready the latest Harry Potter while I waited for Dominica to finish packing so that we could turn off the lights and get a few winks. It was well after eleven before she was ready for bed. So much for getting four hours of sleep!