Even after going to bed so late last night I was still up at ten this morning. It’s a good thing too as my timesheet at work has to be signed by noon and I put it off until today and I could easily have slept through it. (Normally it is signed on Mondays but it is month end so that causes havoc.) I got up and took care of that straight away and then started getting ready to head north to dad’s house.

Dad sent me this picture of Dominica and I standing by my 2003 Mazda 6 Sport back from July 12, 2003 that I just got uploaded to Flickr today.  I am sad not to have that car anymore.  It was a great car. 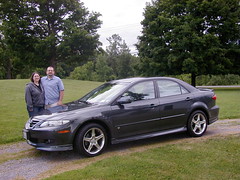 It was about ten after one when I pulled out of Newark to hit the road home. I stopped at the Travel America at Exit 4 on Route 80 west to grab some burritos at Taco Bell and to fuel up. I grabbed a few cans of Rockstar energy drink and was on my way. I emailed dad to let him know where I was – having email on my Treo is really handy.

There was some rain today while I was driving. Of course there was. No matter when I drive back home it always rains while I am driving.

I made really good time and arrived at dad’s house around a quarter after six. Just five hours after having left even with having gotten gas and lunch on the road. Dad was just wrapping up The Wedding Singer which he had never seen before. After he was done with the movie we drove over to Geneseo to get some dinner at Denny’s and then we went to the cinema to watch Disney – Pixar’s highly acclaimed new film Ratatouille.

Ratatouille did in fact turn out to be a really good film. Very enjoyable and good for kids and adults. Very well done.

We were both pretty tired after the movie was over. I need to get some sleep as I am back to work as normal tomorrow so I need to be up fairly early.