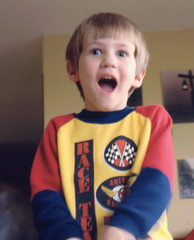 Jeremy is apparently shocked that SGL made it this far. This picture was taken in December of 1993 on the same day that my family made Christmas cookies for the holiday season. You can’t see it but Jeremy is sitting on a plastic 6×6 toy ATV that I used to have when I was little. This is taken in my parents’ living room on the farm. Behind him, if you look closely, you can see that the living room wall had photographs of our vacations in Maine mounted on it. This was the “in between” decorations between the original “Torero and Bull” painting and then later the Thomas Kinkade print.

I have to work today even though I am out of town at dad’s house so I was up around five this morning to check in with the office and to make sure that they didn’t need me for anything. They didn’t and I didn’t have to really work until seven as usual. So hopefully I will be back to my usual schedule, more or less, this week.

Emily emailed me last night to let me know that she is in town too. That is one of the really handy things about SGL – as long as I manage to keep it up to date people can find me when they need to. So we made plans to get some lunch today. I haven’t seen Emily in almost two years I think!

I worked until lunch time when Emily called and said that she couldn’t do lunch but could do dinner. So dad and I went over to Geneseo for lunch at the Omega Grill. Going through Geneseo is always a little weird because Dominica and I lived there for several years but it never quite felt like home. Nothing really does anymore.

After lunch we hit Wegmans for some quick supplies and then we went back to the house as I needed to get back to work. I managed to get a number of additional photos tagged and one uploaded today. I actually put the one that I uploaded today as the main picture for yesterday’s post (they really come out one day behind.) Within the first hour about nine people had looked at that photo!

I worked until around six thirty. Dad and I moved my old childhood dresser out of my old childhood bedroom and down to the barn so that the fireman can take it away for the fireman’s auction in Pavilion. That dresser has been in this bedroom since the house was built in 1982 and was with me in the old farm house as long as I can remember. In kindergarten I had gone on a field trip with my class from Pavilion Baptist School to the Buffalo Zoo and I can still remember buying a poster in the gift shop there. The poster was a picture of a tiger having bitten through a soccer ball and was captioned “I Don’t Like Losing”. I had attached that posted to the side of the dresser as it has fit perfectly into the recessed space on the side of it and dad finally removed that poster yesterday before we took it down to the barn. For twenty-six years that poster has hung there.

I took the Nikon D50 out and walked around the farm. I wanted to both test the old 50mm F1.8 lens that I have from the Nikon 5005 to see if it really wasn’t working like it should with the new camera and the decision was that it isn’t and I am not going to be keeping it. It doesn’t focus correctly and just isn’t useful to me even though it is a great piece of glass. The D50 just cannot reliably focus the 50mm lens. I then switched over to my modern Nikkor digital lens and took more pictures. Now that I have mapping and geotagging capabilities on Flickr it makes making reference photos of the farm very useful.

Emily called around eight and I drove down to Perry and picked her up at her parents’ house and we drove down to Warsaw and went to DiSalvo’s for some pizza.  Well, I got pizza and she got some French fries.  We had been hoping that we would have run into Mary at work but we were informed that Mary has Mondays and Tuesdays off.  So we drove out and tried Mary’s house but no one was home and she didn’t answer her phone.  So we gave up looking for Mary and just went over to the “new” Tim Horton’s in Warsaw and had coffee and hot chocolate and hung out there.  The Tim Horton’s actually opened in January of 2006 in Warsaw but it is new to us.

It was great to get some time to visit.  Emily and I haven’t seen each other since the summer of 2005 or so.  We would have to look up on SGL exactly when it was that we managed to see each other last but it has been some time.  She and Craig moved to Birmingham a year before Min and I moved to New Jersey and the combination of moves just kept us from ever seeing each other (or anyone else for the most part.)  Now she and Craig are in the process of moving out to Pensacola, Florida.

It was around eleven thirty when I got back to dad’s and went to bed.  Have to be working at seven tomorrow morning.