For the first time in a long time I get to work from home today. I have missed my days with Oreo. We all went to bed insanely early last night at just a little after nine which sounds crazy but we were all really tired – Oreo included. Oreo and I then slept in until six this morning and didn’t get out of bed until seven. It was awesome. Actually, Oreo stayed in bed by himself until nine or so. 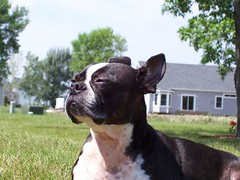 Work was quite busy today and it kept me hopping all day long. I was lucky to be able to sneak out to get lunch at all.

I had hoped to have been able to have gotten a lot done around the house today but with as busy as I was I didn’t get to do anything more than the mildest of cleaning in the kitchen and sorting some mail.

I went over to Food for Life for lunch with Abdul and his brother. 1180 has started letting Abdul into the building again as of last night. This always happens. The building comes up with a reason why he isn’t allowed in the building, expects be to tell him so and then, eventually, they just allow him back in and make me look like the bad guy making it up. It is really unfair to me and I am not playing along anymore. I don’t want him coming into the building. Some of the guys in the building said that the accusations against him were made up and impossible which is probably true. But either way I don’t want him in the building having the concierge page me at all hours. This is supposed to be my home! But they keep letting him in.

Today was one of those really bright overcast days when there is just that incredibly even white light everywhere. It was a gorgeous day but not as cool as it has been for the past week or so.

Just before Dominica got home I finally got a chance to start working on the SUN SunFire V100 server that has been sitting under my desk for a while now waiting for me to get to it. That was no little project. I had to open it up to inspect the hardware to see what we really have. It only has one of the two drives so I need to deal with getting a second drive cage for it. That is a bit of a pain.

The thing that kept me from working on this machine before is that its only outside connections are either network ports or the Lights Out Management (LOM) console interface which I didn’t have a cable for. I bought a cable from eBay and am giving it a try now. It took me a little while, but not long, to get that working. I have it attached to the serial connector of my HP dx5150 OpenSUSE 10.1 machine and used minicom to make the connection. That works pretty well.

The server kept throwing errors and I quickly discovered (well, quickly might be an overstatement) that all four memory chips in the machine were either bad or of the wrong type.  They were definitely mismatched.  I was extremely fortunate that I just happened to have some spare memory (ancient PC133) kicking around the apartment and the one stick that I found popped right in and the server fired right up.  Argh.  Now I have to deal with getting more memory for it.  Always something.

Once that was fixed which actually took several hours after testing all of the memory I was able to perform a Solaris 10 install without too much hassle.  The machine is limping with just 128MB of memory but I got far enough to confirm that the machine is working, needs additional memory, needs a drive cage and two, new 500GB PATA hard drives to make it really useful.  So I will have to get that stuff ordered and get back to it.  At least I know that it is working and exactly what I need.

Dominica and I ordered in dinner from “Big Bite” just up the street and watched some of the fourth season of The Cosby Show which Dominica had picked up recently.

We have started seriously considering getting a downtown apartment in Manhattan.  Our lease ends in November and Dominica isn’t happy at all with her current job and even if she was we don’t think that there is very much chance that they would want to keep her past that point anyway because she is getting paid way too much for what she is doing.  And I am going to be working out of Manhattan soon so the advantages of living downtown are pretty high.  We could do without the cars altogether and I could walk to the office.  That is a huge deal.  We will see what we can find.

We turned in early as I am working the very early shift tomorrow.  Overall today was a very productive day.  I feel good about it.