It’s a very early day for me in the office today. I actually woke up before my alarm and got out of bed around five ten this morning. I have been really restless at night recently which might be because it is so warm. We have gone for several weeks now without a working air conditioner in our bedroom and have put in six service requests but we keep getting forgotten about or something. Or maybe it is just really, really broken and no one can fix it. All I know is we can’t get it fixed and we can’t get the bedroom cool enough to sleep comfortably. It’s all we can do to keep from physically sweating all night. 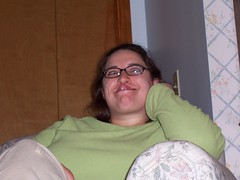 Dominica asked that I point out that she is touching her tongue to her nose.  She says that it is impressive.

I got to play with some new technologies today. I started using Microsoft’s new XPS technology which is roughly an XML based competition for Adobe’s PDF. Interesting but mostly in a “been there, done that” sort of way. Microsoft is several years too late on this one. PDF is an open standard and very widely adopted. Having a standard based on XML is cool but it only gets you so far.

I also got Microsoft Virtual PC 2007 up and running. I have used other versions of Virtual PC previously but haven’t had a chance to play with this latest version yet. Basically, it is exactly the same as far as I can tell. Better support, a little more polished, better performance but the same basic thing.

I installed Oracle’s Unbreakable Linux 4 today too.  It is exactly the same as Red Hat 4 and CentOS 4 which I have worked with extensively but I wanted to test it out and make sure that there were no surprises.

I took the Mazda PR5 into the shop over lunch and discovered that the gas tank is rotted out and that the car is unsafe to drive.  So it is staying at the shop until next week.  I have to work from home on Monday and we will get a status report on the car then and see what needs to be done.

I had a solid morning of work and then a slow afternoon – until five.  Then all heck broke loose and it was one of the busiest Friday nights that I can remember.  A ton of people got stuck working in the office until really late.

Dominica had to pick me up from work today which is a huge pain for her.  Firstly because for once she was planning on going out to happy hour with her coworkers and she had to cancel that.  And secondly because she had to go to daycare and pick up Oreo then drive all the way from the north side of Newark out to Warren to pick me up.  And then she got stuck sitting and waiting for me for several hours.  She arrived at my office a little before seven and it was almost nine when we finally were able to leave.  I was very exhausted after putting in a thirteen hour day.

We took the opportunity of Dominica being at my office and the end of the day to go to Silk Road in Warren for dinner.  Dominica hasn’t had a chance to have Afghan before and I love eating there.  Dinner was excellent.  I got the Mahi Kabob which is salmon and very tasty.  Min got the gulpi which is cauliflower.

My new luggage arrived today.  It is a special travel bag that has space for overnight travel needs in addition to carrying my laptop.  It is designed to be a large carryon so that I can take it to the UK.  Because of my CPAP, overnight flying is very cumbersome.  Our new platform bed arrived today too but we probably won’t have a chance to put that together until Monday at the earliest.

We got home and it was right off to bed for us.  I have to work in the morning, Dominica has to shuttle the boy off to daycare where he will be boarded tomorrow night and  then we are driving up to Ithaca.