I remember when Fridays were nice because it meant the weekend was here. Now I am starting to dread them because I have so much work to do on the weekends. I have a another Java project due tomorrow night that will keep me hopping all night tonight as well as all day tomorrow. And, in addition, I am the primary “on call” for the office this weekend which means a fair amount of work to be done tomorrow and a lot to be done on Sunday. I am going to be exhausted getting back to the office on Monday.

In this picture I am pretty sure that Pam and Ryan and laughing at you for taking the time to read SGL. I find that very amusing. 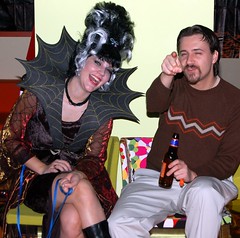 I stopped by Cafe Airlie on my way in this morning and got my usual egg and cheese with pepper on a hardroll. Then I walked into Newark Penn Station. There was hardly anyone on the train this morning. I couldn’t believe how empty it was.

Dominica and I decided that I need a tiny MP3 player to have when I am commuting back and forth to Manhattan. Now that I am not driving my MP3 player concerns are very different than before. Now space and weight is at a premium and the third generation iPod Nano can hold 8GB of books and podcasts and can play tiny videos. Perfect for riding on the train. My other players are too bulky for commuting on foot. Having things in my pockets doesn’t work all that well. We are thinking about getting me a messenger bag as well so that I have a place to store my books and BlackBerry and everything else that I carry back and forth every day.

Today HP is celebrating the 30th Anniversary of the VMS Operating System.

Today was very busy and I barely had time to do anything this morning. I had requests coming in so quickly that I was beginning to “task thrash” from being forced to mulitask over too many items. My job is largely event-driven and tasks will often preempt each other which can cause productivity to plummet if it happens too much. Today was one of those days.

By lunch I was really looking forward to having a few minutes off so I walked up to Borders and picked up the Llama book – “Learning Perl” – for Dominica who has been needing it. On the way back to the office I stopped at “Hot Soup” and picked up some lobster bisque for my lunch. I need a pick me up to keep me humming along today.

Since it is a Friday and I am stuck at work late Dominica decided that she would stop by the Best Buy near where she works to see if they have the new Mac Mini in stock loaded with Mac OS X 10.5 (Leopard.) Our plan is to get one of those and attach it to the wireless keyboard and mouse that we got from Andy and use it in our bedroom hooked to the 32″ 720p television screen. It won’t be the best resolution but it should work well and will be perfect for watching Internet shows. And it will allow us to surf the web and check email from bed.

Last Saturday I ran through the upgrade of my Palm Treo 700p that I have from Verizon. The old software on the machine was incredibly buggy and I could never get the Treo to work at all. One of the sad things about the unit was that its battery was only lasting me about twenty-four hours which meant it was a constant struggle to keep the unit charged and working. Since I did the upgrade on Saturday the unit has been on and still has a bit of battery left to it. A whole week almost and it is still chugging! It is amazing what a difference software can make for something like this. I don’t have it all working like it was before but maybe I can look at that this weekend. But I am very happy about the battery improvement. It went from being the worst performing unit that I have owned in a very long time to one of the best ever.

Dominica found someone at work who is interested in buying our “old” Mac Mini. It isn’t that old but it is lacking a few critical feature that Dominica and I need in a unit like that. Namely wireless since we want to have that unit in our bedroom which is a thin wall away from our wireless access point but a very long distance for a while to travel since we can’t run our own wires through the apartment walls.

Min hit Best Buy but discovered that they are not selling the Mac Mini in stores but only online through the Apple Store.  I had originally avoided buying the Mini through this channel because I wanted to be able to verify that the latest operating system would be loaded onto it.  Originally they were not disclosing the OS version on Apple’s page but now they are advertising that they are shipping with OS X 10.5 so I guess that it is safe to order from there now.  I think that I will wait until after Dominica and I return from the UK as I will have no spare time at all between now and then.

My evening at the office was very busy but it didn’t go nearly as late as I thought that it might have.  I was working like crazy from about three until a quarter after six but then everything just dropped off and people began leaving the office.  So I got to head for home at a reasonable time.

Tonight will be mostly relaxing and prepping for my big homework day tomorrow.  Tomorrow I will be hunkered down in the apartment doing nothing but Java all day.  Dominica is thinking that she is going to go out shopping at the Lane Bryant weekend sale.  That will give me some quiet time at home to work on the homework.  I had been hoping to have at least gotten a chance to have looked at it today but no such luck.