Thanks to dad for this link to Bill Gates’ Last Day at Microsoft. 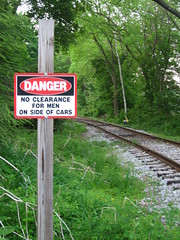 I guess this sign explains why it is important to pay for a train ticket. Clinging to the side of trains is not a safe way to travel no matter how economical it seems.

I discovered today that the Medina Railroad Museum has the largest single floor HO model railroad (apparently in the world but they don’t specify exactly on their website – it is 14′ x 204′.) Medina is located less than an hour west of Rochester between Rochester and Buffalo. There is so much stuff to do back home that I never realized was there when I lived there.

To those of you who are from “back home” it might be interesting to know that Arcade, New York in Wyoming County was once the sole production location for the soy product Cremora. Cremora originated in Arcade and was once exclusively shipped out on the Attica & Arcade Railroad which has been operating the line in Wyoming County since 1917.

Today is the first day “post financial industry freeze” and the real work begins anew. I had some stuff going on this morning so I was up at five thirty making sure that the early morning deployments were going smoothly. There was quite a bit going on so I ended up doing quite a bit of work before getting a chance to escape from the apartment.

The weather was awesome today. In the fifties. It was so warm that I didn’t even bother to take a jacket or a fleece or anything while walking to the office. And it was perfectly comfortable. Rumor is that we are going to be in the mid-sixties tomorrow. Now that is just crazy for mid-January.

I worked until after six and then walked to the train. Today I am listening to “I’m a Stranger Here Myself” by Bill Bryson. “I’m a Stranger Here Myself” is a book written from a series of newspaper articles that Bill – I can call him Bill as I am a familiar American – wrote upon returning to live in America after two decades of living in the Yorkshire Dales of Northern England.

On my way home from Manhattan I stopped by at Newark Penn Station’s McDonald’s and picked up dinner. Dominica and Oreo were home long before me and that makes the evening easier. Min was watching Heroes season two when I got home so I didn’t expect to see or hear from her for the rest of the evening.

I had more work to do for the office so I read the technology trades while eating dinner and then went back to work. Can’t complain about having too much work these days. There is a lot of expectation at the office that large workforce cuts may be coming down the pike in the next several weeks. This is the most concern that I have seen from my coworkers about layoffs since I started there about two years ago. But I figure that it is mostly just huff and that the layoffs, if there are layoffs, will hit us rather lightly.

Dominica watched all of the Heroes episodes that were available to her.  I worked until around ten thirty.  At that point I decided that I needed some of the evening to myself before needing to get off to bed so that I can go back to the office tomorrow.  I did get some good, important work done though so I am happy that I put in the time.

I did take about half an hour and practiced some classical guitar.  It has been quite some time since I have played that much.  I really need to get back to practicing on a regular basis.

I updated Dominica’s personal web site for her so that it is more of a resume site rather than her old attempt at a blog from 2002.  She managed to do just one entry before she gave up on that project but the one post has been lingering on her site for six years now.

We didn’t stay up too late tonight.  Got to get back into this work groove.