Dominica actually woke up before me today. I was pretty tired but not too bad. We got up and checked in with Kit and Jay about meeting them brunch in the city but they weren’t feeling well this morning and decided to drive back to Baltimore this morning rather than this evening. 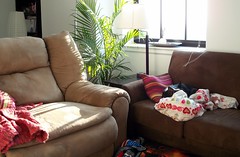 We got up and got breakfast from Market City and played some Settlers of Catan while we ate. Dominica has been continuing to beat me repeatedly now that she has gotten addicted to it.

Dad’s HP Pavilion laptop, which has been on its last leg for weeks now, finally died completely today and does not boot up anymore. So he attempted to switch back to his even older Toshiba Satellite laptop and found that it decided not to fire up today as well. So he is suddenly down two laptops and only has his Hewlett-Packard desktop which desperately needs to be rebuilt because of a virus infection. The plan is to dig out my G4 based Mac Mini that is at his house and to use that for his normal, day-to-day, computing needs like surfing the web and checking email.

It makes me feel better about owning that PowerPC Mac that never really got any use before. We had used it as our “guest” computer in the living room of our house in Geneseo but it never came to New Jersey with us because we didn’t have any space for it and no real need for an extra machine of that type since all of our computers are already in the only space that we have for them anyway – no need for a computer in an alternate location. The Mac Mini that we currently own isn’t wireless either so it would only be useful along one of the two walls next to the routers that we have. The next Mac Mini that we get will have built-in wireless so that we can use it anywhere connected to our Apple AirPort.

I had homework due on Friday night and more due today by midnight. So my afternoon is set aside for working on object modeling for RIT. Dominica decided to avoid her computer and to was Mr. and Mrs. Iyer on DVD that she borrowed from a friend at her office. Dominica worked on a knitting / sewing project that she finished two years ago but had to make one small alteration before she could use it. So hopefully tonight she will have a “new” sweater to wear.

I uploaded a couple new pics today and put them on the last couple day’s posts – in case anyone missed them. The Abby Mott show ticket image and the Newark St. Patrick’s Day Parade coming down Mulberry Street.

It’s the weekend and so that means tons of laundry going on all of the time. It might be noisy but having the laundry facilities in our apartment really helps us to be able to spend a lot more time together. You don’t realize how important this is until you live without it for a little while. Then when it takes a huge toll on your ability to spend time together you figure out that it is a critical investment to make. 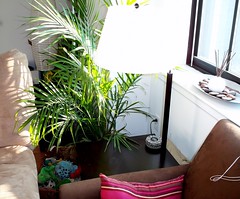 I wrapped up my homework at a quarter until six. So we tried to see if people would still be available for some Dungeons and Dragons tonight as we haven’t had a chance to play in quite a while. We didn’t end up managing to get a hold of everyone, though, once we knew that we would be able to play.

Dominica and I played two games of Settlers of Catan and then Dominica realized that her Computer Operations and Security class is set to begin tomorrow. She had been thinking that her class was not going to begin for another week yet. She hasn’t ordered her books yet or checked on the class requirements so she is scrambling to get ready to start tomorrow. She got all of her books ordered right away. Hopefully she will have all of them in time.

This is the first semester in quite a while that Dominica is attempting two classes overlapping while working full time. She is going to be really burned out over the next sixteen weeks. The later half of her GPS and the New Geography class overlaps with the first half of Computer Operations and Security. And the later half of COS overlaps with the first half of her Intro to Web Design with HTML class.

Since I was doing Flickr updates today I went back and updated February 22 with its “snow day” image – a picture taken from the apartment to show just how much snow we were getting all day. I also updated February 15 with pictures that I took on Wall Street that morning.

I needed to do some editing of QuickTime videos so I bought Apple’s QuickTime Pro 7 tonight. My first project is to see about converting videos taken with my Kodak digicam and making them playable on the AppleTV. I am converting the videos to 720p h.264. Unfortunately the sound isn’t very impressive.

I talked to John Stephens (a.k.a. The Surfing IT Wizard) tonight – he is just moving into a new apartment in Apalachin, New York this weekend. He has moved up from a tiny little one bedroom in Endicott where he has been for years to a bigger two bedroom although I think that he is a bit farther away from work now. Apalachin is famous as being the home to the 1957 Mafia meeting (known as the Apalachin Meeting) which is featured in the beginning of the movie Analyze This. A friend of mine lives next door to the famous home.

Dominica spent the later part of the evening playing MySims with Oreo snuggled on the bed. Oreo had decided that he really just wanted snuggles and wasn’t going to be happy until someone went to bed and stayed with him. He gets that way sometimes. He is such a funny dog.