Today was the most absolutely gorgeous day. More than seventy degrees, clear and sunny. I was actually just a touch too warm as I took Oreo out for his morning walk. We ran into far more dogs getting walked today than usual. Everyone was wanting to get outside and soak up the weather. It is clear too, not like yesterday. Yesterday the haze was so thick that I could not even make out the Manhattan skyline whereas tonight as I am writing this update I can make out the lights in every window of every building in uptown just to the left of the monitor that I am typing on. 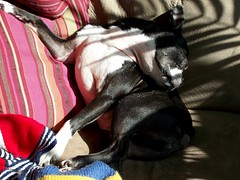 I am really going to miss the constant presence of Manhattan being just outside the window when we move away from here. Even if we don’t get to spend all that much time actually in the city it is just so amazing having it sitting right there. I love all of the twinkling lights and the passing cars on the bridges leading in and out of the city. I have always liked cities at night. So many people yet so quiet and still. I need to get some pictures of Manhattan at night from our view here before we leave. It is rather unlikely that I will ever have a view quite like this again. This is very much a once in a lifetime kind of opportunity, I’m sure. Nevertheless, we have had it for a year and a half and it will be over two years when we actually leave and I have worked from home a lot during that time and my work area has always had this view so very few people anywhere have had the chance to take advantage of such a view as much as I have.

We turned down our lease renewal. The apartment building offered a deal to those who would renew in March. Personally I think that it was a foolish move asking us to renew so far in advance. We didn’t have enough time to really think about or make any plans to stay or go. So, since we couldn’t guarantee that we needed to stay we effectively guaranteed that we weren’t. Had they extended the offer to a point where we were really able to make a commitment then we might easily have decided that staying in Newark for one more year was going to make sense. But, now we know that the financials just aren’t going to make sense for us next year and this apartment isn’t really an option. The handy thing for us is that now we have seven months to make plans for moving knowing exactly when we are moving. I have never had so much warning on a move before. Our last day in Newark, or at least at Eleven80, is October 31st. Now we just need to figure out exactly to where we are moving come November.

Oreo was very, very happy to be home today. He was so exhausted. Dominica tells me that he played a lot more than usual at daycare yesterday because Lana, the little puppy that he loves to play with, was in playing with another dog and Oreo just couldn’t resist and he played all day. He was all worked up and being crazy last night when he got home. Today he is making up for it. Just sleeping and sleeping. Even on his walk when he saw other dogs he could do no more than take a quick sniff to acknowledge their existence and drag himself along until he was able to do his business and then get back home to go to bed.

At one point late this morning our silly dog was sitting on the loveseat in the living room and was itching the middle of his back with his head turned all the way around. He was in the sunlight and apparently quite comfortable as he just fell asleep right in the middle of itching himself. It was the craziest thing to see. I look over and there he is all passed out in what appeared to be the most uncomfortable position imaginable. He was so sleepy that I was able to take several pictures of him and walk about without him stirring at all.

Dominica came home and we watched the final two episodes of the 2006 season of Doctor Who.  These were some seriously good but sad episodes.  We are definitely looking forward to the next season as well as to checking out Torchwood the Doctor Who spinoff series.  (For those in the know, “Torchwood” used to be a code name for “Doctor Who” used at the study.  You will notice that the letters from Doctor Who can be used to form the word Torchwood.)

After dinner and the show it was time for bed.  We “popped in” some What I Like About You that we watched while we cleaned in the bedroom.  Dominica assembled her new shoe rack and got it put into the closet which cleared up a ton of space and now the closet doors can close.  It also freed up some plastic bins that I need to organize other stuff around the house that has been sitting around waiting for a box into which to go.

I stayed up for a while after Dominica went to bed and did some web site work and Handbrake conversions.  Nothing heavy just some light stuff that needed my attention and that I wanted to get out of the way.  By a quarter after eleven, Oreo was getting quite insistent that I come to bed.  He doesn’t like it when one of us goes to bed early and one stays up.  It makes him nervous or something.

Dad is finally doing a rebuild of his Windows XP workstation today.  It has been been rebuilt in many years – even possibly never although that seems to be a stretch.  I generally recommend complete rebuilds every six to eighteen months with once a year being a pretty happy medium.  I rebuild my Linux box every six months but that is because I want to use the very latest OpenSUSE release.  My Windows machine probably sees a fresh install every nine months or so.  Being in the habit of constantly rebuilding means that you are always keeping things cleaned and you are always prepared to start fresh at any moment.

This coming weekend is going to be busy with homework.  Dominica is almost caught up in her class but still has a little bit that she needs to do plus the steady stream of new work.  This is one of my busy homework weekends just in general.  I am not behind at all but that doesn’t make it any easier.