I was pretty tired this morning but I could not really sleep in at all, even though I didn’t get a chance to go to bed until one in the morning, because yesterday I forgot the camera in Dominica’s Mazda and I had to go down this morning to get it when the valet brought the car around for her to go to work. It was a good thing, though, because Oreo had a bit of an emergency this morning and I had to run downstairs with him and run him around the block before he could get in the car to go to daycare. So it worked out well even if I didn’t want to get up so early. 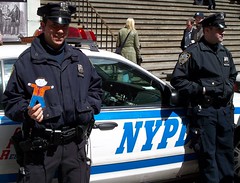 My project today, other than going to work as usual and getting a head start on this week’s homework, is to hit the lower Manhattan hot tourist spots with Flat Stanley. Katie is meeting me at lunch time and our plan is to go to Battery Park and see the World Trade Center memorial and the Statue of Liberty and then to go down Wall Street and see Trinity Church, the New York Stock Exchange, Federal Hall and maybe some spots like Tiffany’s. The Branch Brook Park Cherry Blossom Festival is on in Newark next weekend while dad is in town so maybe we will get a chance to go out there with Oreo and Flat Stan and get some pictures there as well. That is definitely one of the Newark highlights.

I grabbed the Kodak V1253 and Flat Stanley and we were out the door this morning. It is so warm that no jacket is needed, not even a fleece. In fact I rolled up my sleeves before even heading outside. The sun is shining and it is just a perfect day.

On the way out of Eleven80 I ran into Kevin and Pam in the elevator. Pam was just walking out to the car but Kevin was on his way to the PATH so we walked and rode in together until Exchange Place when he switches to catch the other line up to Christopher Street. Having Kevin on the train made it possible to take a quick picture of Flat Stanley riding the subway. I guess technically you are not supposed to take pictures on the subway because the Port Authority police think that terrorists don’t know what the train looks like and that having pictures of it will somehow make targetting it easier. Once again just incompetent law enforcement trying to look like they are accomplishing something by doing something counterproductive because they have no idea what to really do. Instead of making terrorist have a hard time – because if you want a picture of the subway you are just going to get one with a cell phone that everyone is holding on their anyway – they just make the regular passengers feel like criminals just for existing. 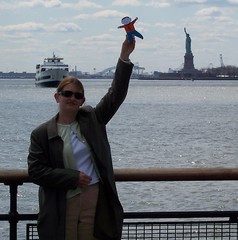 The morning flew by and before long it was time to take Stanley out for his walk around the city. Katie and I met up at the head of Wall Street at Trinity Church at the corner of Wall and Broadway. Then from there we came down Wall stopping at the major sites and also getting a picture of Stanley with the NYPD protecting the stock exchange. Then it was down to Battery Park to get pictures of the harbor, the statue, Ellis Island, Governor’s Island, Jersey City, etc. We even got to go up to the twenty-seventh floor of Katie’s office which is right on the harbor and get pictures from up there. It was a very productive picture taking day, and it was a lot of exercise as well. I probably did two or two and a half miles just during lunch. That is in addition to my normal walking of around two miles.

I was pretty tired by the time that I got home. I am not used to doing this much walking in a day and especially not out in the sun which always wears on me. I was on the walk home and my next door neighour walked right past me while I was getting Stanley his knish for dinner so I recruited him (my neighbour) to help with the picture and then we rode the train together. So, for the first time ever, I had someone to talk to on the train in both directions. That just never happens.

Dominica called me while I was on my way home saying that she wanted to have McDonald’s for dinner. So I stopped at the McDonald’s in Newark’s Penn Station and picked up dinner just before arriving home.

We took it easy tonight. Watched a little of the fifth season of The Family Guy and then I did a bunch of photo editing and uploading to Flickr. In the end we had forty-two Flat Stanley pictures today that I thought made the cut for the Flickr set.