Well, it’s that day. Taxes are due. I turned mine into the accountants several days ago but didn’t hear anything until this morning and it wasn’t good news this morning. Dominica and I were sure that we were going to be getting several thousand dollars back when we filed and were looking forward to being able to invest that money. No such luck. We actually owe quite a bit this year and there is a lot of complication caused by our dual-state status that is causing issues as well. So I spent a good chunk of the day on the phone dealing with tax issues. Not exactly a fun day.

At least today was a bright and sunny day – just gorgeous here in the New York City Metro area. Warm and breezy and no chill at all. I got lunch at Airlie Cafe across the street. 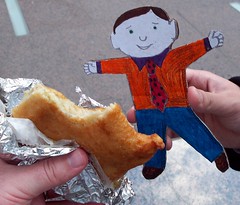 The dishes were a bit out of control today but I managed to get a load of them done. The floor has been getting really dusty because our vacuum cleaner has been broken ever since it sucked the threading right out of our living room carpet destroying both itself and the carpeting. Dominica fixed it the other day and I tried doing some floor cleaning today. However, the crappy plastic nozzle broke yet again (this thing is made of the most brittle plastic ever) and the belt drive is still not functioning. So I had a tough time even doing some basic floor vacuuming and a new nozzle is an absolute necessity at this point.

I forgot to mention that on Friday I finished reading “Agile Retrospectives: Making Good Teams Great”.

I was pretty burnt by the end of the day today but a lot of important work got completed and I can only complain so much.  After work wrapped up I did a bit of cleaning as we decided yesterday that we are going to attempt to have a D&D game at our place tonight.  We didn’t decide until today whether it was going to be Feder’s Known World campaign or my Forgotten Realms game but the last minute role call left us with me being the dungeon master for the evening.

We are all pretty excited about getting to play tonight as it has been over a month since we have been able to get together and the last session really left everyone hanging as the stalwart adventures were barricaded into a small room at the end of a long tunnel and there were goblins attempting to break down the doors.  Cliffhangers are always a good way to leave the game resting.  🙂 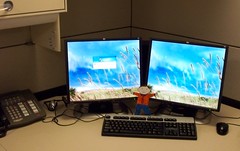 Dominica got home and made herself dinner on the early side and relaxed for a little while with Oreo and started watching Doris Day and David Niven in Please Don’t Eat the Daisies.  I got the game ready, as much as I could, and then at a quarter to eight went down to Food for Life to meet Ramona who was picking up dinner there.

We started the game just after eight and played until ten thirty.  Dominica thought that she was going to be really tired but actually did really well and was “with it” all night and wasn’t really ready to stop playing even at ten thirty.

We were not really all that tired even after the game so Min and I watched two episodes of the fifth season of The Family Guy before going to bed.