Just a normal day in the office today. I found out today that a number of people are coming into the city tomorrow to visit the Manhattan offices so I am changing my schedule for the week so that I am in the office on Thursday and will be staying home on Friday. This works out well as I am scheduled to work until ten o’clock on Friday night and then to start again at eight in the morning on Saturday. So going into the office on Friday would have been a problem anyway. 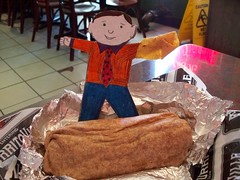 Katie and I wanted to do lunch today so that we could take more Flat Stanley pictures. She got caught in meetings though and we didn’t get to go at one thirty like we had planned and ended up going to Burritovillie at a little after three. It was a short afternoon since we both got back to the office after four.

I came home to discover that a water line on the fourth floor of Eleven80 had burst just minutes before I got home and everyone was in quite the panic.  Water was already beginning to run through the ceiling into the lobby on the first floor.  You could hear the sounds of water rushing on the second floor above us and it sounded like a river up there.  I managed to catch a ride up to the apartment in the elevator before there was time to shut it off.

Dominica and I arranged dinner with Ryan over at Sculley’s Publick House and shortly we headed down to the lobby to meet.  We immediately discovered that we had no elevator so we tried the stairs.  At the fourth floor we went out onto the floor to investigate and even there there was still water running out of the ceiling and the whole middle of the floor was under water.  The water was rushing down the elevator shaft like a waterfall.

So we continued on down to the third floor and checked things out there.  The third floor had almost as much water on the floor as the fourth floor had had.  From there we weren’t able to head down the stairway any farther as the ceiling in the stairwell had started to collapse and water was pouring down into the stairways so heavily that we could not pass.  We had to try the other stairwell.  Luckily the other stairwell was not so much underwater that we couldn’t get down.  It was really a surprising amount of water.

We had dinner with Ryan at Sculley’s.  The food and service has improved significantly over the last few months.  The meal was really good.  When we got back to Eleven80 they had one elevator up and running to get us back up to the apartment.  It’s amazing how quickly they got the place functional again – although there is a lot of work that is going to take a very long time.  I can only imagine that the damage is just unreal on those three floors.