It is another beautiful day here in the New York Metro area. The sun is shining and it is quite warm out. Today is a different work day which is fun to have for a change of pace. Helps to keep things interesting. Today several people are coming into the Manhattan office where I work from our New Jersey, Toronto and Long Island offices so I am giving tours of the Wall Street office and going up to Tribeca later on in the day as well.

Flat Stanley got a chance to visit Munich, Germany today. This is Flat Stan’s first time to a place that I have not been to yet. 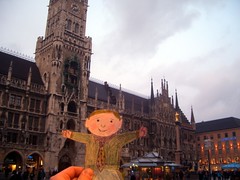 Dominica and I are talking about take another weekend trip to Disney World late this spring. She and I both have some vacation time stored up, not a lot but a little, and we want to get away. So we are thinking about doing four days at the Wilderness Lodge which neither of us has stayed at before and we would really like to stay there. The Wilderness Lodge is near the Contemporary Resort in the Magic Kingdom area and is generally considered to be the most romantic resort in the Disney complex. We really liked the Animal Kingdom Lodge so we want to try out more of the real “resort” locations.

Try out this “moving jigsaw puzzle.” Not hard at all but what a cool idea.

I spent a lot of the morning giving a tour of the building that I work in. I am the only person from my team that has access to some of the floors. So we did that in the morning and then the team that came out all went to Pizzeria Uno at the Southside Seaport for lunch. It was my first time ever really going to the seaport. I have been to it before but have never sat down and had a meal there. It was very nice. What a great location in Manhattan. Maybe I will get a chance to take Flat Stanley up there for some pictures. I had him with me today but didn’t bring my camera as I knew that it was going to be a busy day and that I wouldn’t have an opportunity to take any pics.

In the afternoon we went up to the Tribeca office. This was actually the first time that I ever got to tour our datacenter there which is one of the primary datacenters that I support. Datacenters are, by definition, not very interesting. Just power systems, cooling and servers in cabinets. Mostly locked cabinets where you can barely make out what machine is where. So there really isn’t anything to look at. I have been to many datacenters over the years and none are very exciting. If you have seen one then you have seen them all. But it is handy to be able to visualize what people are looking at when you send them to the datacenter to do something for you.

For dinner Dominica and I finally tried out the new Blimpie subs on the corner of Commerce and Mulberry right next door to the apartment. There was a Blimpie there before but it was in horrible disrepair and no one would ever go in there. But a very nice woman bought it recently and has done a lot of work to clean the place up both inside and out. She had new awning put up which really helped to fix up that corner which looked like a war zone before. And she has a man dressed as a bear standing in front of the place now getting people to come in. Maybe the biggest change is that Blimpie is now open reasonable hours and not just for a little while during lunch only for the business crowd. Now Blimpie is catering to the neighbours as well. The food was actually very good. Andy and I was got Blimpie in Rochester and it was awful. So I was gun shy about trying another one. Boy am I glad that we did. Blimpie was very good and very cost effective. This will be another food choice for us in the evenings as well as for my lunches.

I am working from home tomorrow. It is going to be a really long day. Oreo is exhausted after four straight days of daycare. He is really looking forward to having a long weekend. He will definitely be ready for a trip to the park by Sunday.