Oreo got me up at four in the morning wanting to go for a walk. It is so unfortunate that he is unwilling to use the doggy potty that we bought for him. It is taking up so much space in our apartment and was so expensive and it doesn’t seem that he will even have any interest in it at all. Very depressing. And it isn’t easy to move into storage either. So, a long late night walk was in the cards for me.

I was back in bed but had not quite fallen asleep when I was paged out from the office. Had I just fallen asleep it would have been much worse. As it was I was still coherent and able to function, more or less. So up I got again and out to the living room I went to fire up the VPN and log into the office network.

I ended up being awake and out of bed from four until almost five thirty in the morning. It was so long and by the end I was so awake that I started considering whether or not I should just get out of bed and stay up through the morning, but I have been so far behind on sleep all week that that didn’t seem like a good idea no matter how practical it might have been under other circumstances.

I ended up sleeping until noon. I really needed the sleep and felt much better after that. Between going to bed late and the late night interruption I figure that I got just over ten hours of sleep which is really awesome for me. Dominica and Oreo were up about two hours before me.

Today is Dominica’s crazy homework day. Her class officially ended on Friday at midnight but her professor is letting her use the weekend to complete her homework. I think that a lot of people in the class are using the weekend to submit “late” before Monday’s cutoff. So on Friday night she completed everything except the final project and yesterday she worked as much as she could to get some more of the project done. Min was pretty under the weather yesterday. She is on some anti-biotics that are really knocking her out and she was barely functional yesterday. So today she is skipping them so that she can get her work done before midnight. 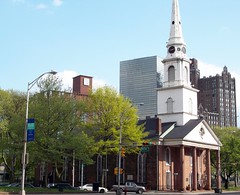 After I was up and showered we ordered in some food from Nino’s, a breakfast pizza, and watched some of The Love Boat while we ate. Then we harnessed up the dog and went for a long walk through Military Park and Washington Park and up to Riverfront Stadium to take pictures that Dominica needs for her project. That was quite and undertaking and we were all pretty worn out by the time that we got back. We were probably gone for well over an hour. Oreo had a great time and was very excited to get to visit Washington Park which he has never been to before. He has never walked past Military Park to the north. So it was all new smells for him to discover.

Dominica and I settled in in the living room and the rest of the day was spent working on homework. Not a fun day. Today is the last day of paperwork for my class and fifty-percent of my grade is based on the work that I hand in tonight. Dominica will be extremely relieved tomorrow when she knows that her class is finally over. She should sleep well tonight. This class has really been a problem for her and, while interesting, it isn’t a class that really teaches her core IT principles so it isn’t really adding to her ability to get better work in the future. So it is pretty frustrating even though, under other circumstances, it would at least be an interesting class.

Tomorrow I am working out of Warren so I have to be up quite early in the morning and ready before Dominica gets up so that I can hitch a ride with her up to the Broad Street Train Station. That saves me a ton of time in the morning and helps keep me from walking more than necessary. I enjoy walking but my right foot has been hurting a lot recently and I am trying to give it time to heal.

Dominica wrapped up her project around eleven. And then she was off to bed. I went on and worked until midnight. Not much sleep for me but the class is almost over. Only so much more work to come out of that.