I was awoken this morning by the phone.  It was an renewal operator from Ziff Davis Enterprise trying to renew my Baseline subscription.  This same guy called me at work yesterday and on the train ride home even though I told him that I would be on the train and unable to take his call.  This whole process makes me really upset because I can renew online but they never let you.  In general I don’t do business with anyone who contacts me by phone, especially my mobile phone.

So this morning he convinced me to waste several minutes going through the same information that they already have about me and taking forever to do so because he wouldn’t listen to me at all.  Then, when we got to the end, he tried to renew my eWeek as well.  I explained, over and over, that just like the Baseline subscription, I was already getting eWeek and did not need to renew and that, in fact, I received more than one copy of eWeek each week because someone had called me, screwed up and didn’t listen to me, and that I most definitely would not like to receive a third copy each week. 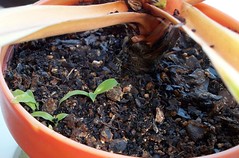 Instead of paying attention and not renewing my eWeek he went into a diatribe extolling the virtues of eWeek as if having a third copy would magically make its real benefits shine through.  At this point I couldn’t take it anymore.  I informed him that I was not authorizing my Baseline renewal and that I wanted my eWeek canceled.  I’ve had it with these guys.  They aren’t polite, they aren’t informed.  They must get commission because they will do anything to get a subscription out to you.  They are very, very rude.

I tried to contact Ziff Davis’ customer service but their “Contact Us” page goes to nothing but an advertising submittal form.  I did some more searching until I found a general contact link for them.  I am sure that it will go no where but at least I will inform them as to why they lost a customer (or, as they sell me to their advertisers, three customers.)

After being a customer of ten years and always renewing my subscription online they felt that it was worth paying someone to call me and offend me.  Well, that was the last of my paper based IT publications.  I had long ago dropped publications from other companies and was only really enjoying InfoWorld but they switched to all electronic a year or so ago – so I read them online.  I only read eWeek, which was pretty weak in general, because it was handy to have something laying around in print.  No more though.  At least I will have that much less mail to deal with on a weekly basis.  And I was beginning to feel like spending time reading that stuff wasn’t very valuable.  The quality has gone down a lot in recent years as the competition has mostly gone away. 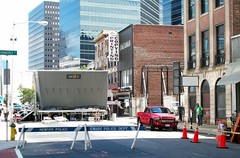 A woman in Sweden, misunderstanding baggage checkin instructions (and not being one to simply “follow the crowd”, placed herself onto the automated luggage handling system and was whisked away with everyone elses’, but not her own, luggage.

I went out to walk Oreo around noon and discovered that our street, Commerce, had been blocked off by the police and that the center of the street was being set up with a large stage. Not something that you see every day in Newark. It is really weird the amount of stuff that they do here for which they do not inform the local residents at all. In fact, living right here on the block where this is going on, I find it hard to find out what event is underway even when it has already begun. Even the concierge in our building have no idea.

On my next trip out, to get lunch at Airlie, someone handed me a flyer in the street for the “event” – their only announcement of their event was to hand out flyers in the street like the people pushing the girlie shows in Manhattan? The flyers claimed that it was an extension of the DNC from a group called “Black by Popular Demand”.

I found out from sources here and there that there was some announcement made last evening that parking on our street would not be available today but apparently those signs were taken down during the night and did not exist this morning. Then, this morning, the police came in and had cars towed away and then put up the “no parking” signs to act as if the people parking there were informed!

I also found out that the businesses on the street, but not the residents, were given a petition to request this event.  But the businesses, who lost a lot of money today since the street was closed during business hours, were told that the event was a block party.  This was strange as the only residents of the entire block are all in one building, Eleven80.  So a block party would normally be inside the building since that is the entire block.  They were also told that it was an afternoon block party with the implication that that would bring in crowds and business in the afternoon.  So the petition passed.

It was not until the street was closed off and a stage was being erected in the middle of the street, and after peoples’ cars were being towed, that flyers started to be handed out and the businesses discovered that instead of an afternoon block party it was an at-night political rally with some seriously immoral overtones.  So instead of making extra money they were losing quite a bit – all for a rally happening after almost all of them would have left town to go home.

I am guessing that they did anything that they could to avoid alerting the residents of Eleven80 to the time and place of the rally because their plan is to have a late night party in the street violating what we believe are the local noise ordinances and causing real disruption to those of us who actually live on this street.  In many ways this is, once again, the residents of the larger Newark area and city haul flexing their collective muscles and sending a strong signal to the tax payers in Eleven80 to remind us that we are not considered to be residents and our presence is not appreciated here.  It is pretty obvious since they selected the street directly in front of our building.  What a ridiculous location if not to make a statement.  With The Spot being a busy late night location in Newark, having the rally where they did had the potential to disrupt one of Newark few, legitimate late night venues as well.

My afternoon was not too busy which was good as I had to do some cleaning around the apartment,  This place has gotten completely out of control.  We have just been so busy recently plus with the number of computers and other equipment flowing through here in the last few weeks it has made things much worse.  There is an extra “work bench” style table set up in the living room by the bookshelf that is not helping things in the least. 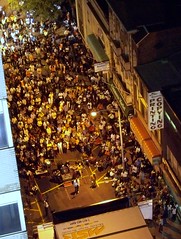 Dominica picked up fish tacos on her way home from Totowa today as she normally does on Thursdays.  She got home and we ate our dinner and watched a littel bit of Frasier.  It didn’t take long before the television became difficult to understand because of the noise level coming from the rally outside.  We eventually switched over to air conditioning just to help block out some of the noise but it did very little in that regard.

Luckily Oreo did not need to go for a walk this evening.  Oreo is in a certain amount of danger in Newark at the best of times – Newark natives tend to be deathly afraid of dogs and refer to all dogs, even tiny little snuggle dogs like Oreo as pit bulls and will literally jump from the sidewalk in terror – so having a crowd of Newarkers on the street and trying to take Oreo through could easily lead to someone attacking him or using the opportunity to claim that they were attacked.

I was a bit afraid to go out there myself but wouldn’t have really worried if I didn’t have to have Oreo with me.  Dominica wanted me to take Oreo into the dark of Military Park at night rather than go down Commerce but that didn’t seem like a very good idea either.  But it didn’t become something that we had to decide upon anyway.

Dominica went to bed, or tried to at least, as early as she could.  She cooked Oreo’s stew this evening and that took until around nine.  Then she tried to go to bed but she was not able to fall asleep for a very long time because of the incredible noise levels.  That was pretty crappy.

The convention finally wrapped up at eleven which was better than we had thought having been warned that they were planning to go until midnight.  That would have been really awful.

I spent most of my evening working on a number of minor projects including SparkWeb from Ignite RealTime which I now have running in a preliminary form.  I don’t like it nearly as much as I like regular “old” Spark, the Java IM client, but SparkWeb is a very neat and interesting addition to my application portfolio and will definitely come in handy from time to time.  I also did some desktop management and then, when everything else was wrapped up, I started the setup process of the DL145 G3 server which is being installed with CentOS 5.2 this evening.

Getting the DL145 G3 built was a bit of a chore as there was all kinds of LO100i stuff that I needed to before I could get it started.  It turned out that the version that I had was not functional so I had to flash it to the latest edition which is often a pain.  I did eventually get it working and was able to kick off a CentOS install before heading off to bed.

I took a few pictures of the rally going on down on Commerce.  It was hard to get pictures as it was night time and just as I figured out how to position the camera to get good results the street lights shut off leaving the crowd very much in the dark.

Tomorrow will be my first time going into the city with my new bag.  I am actually looking forward to trying it out.  Carrying everything in my pockets has just been so annoying that having a solution to that problem just makes me feel better about walking into Manhattan.