I decided today that we are having problems taking pictures of Liesl in the new house because it is always so dark in here.  My good camera, my Nikon D50, only has the cheaper zoom lenses right now with the fastest aperture setting being an F4 ad F5.6 at some normal settings and that just doesn’t work for anything indoors.  So I bit the bullet and bought the amazing Nikkor 50mm fixed length F1.4 lens off of Amazon.  That should provide a lot more natural light opportunities. 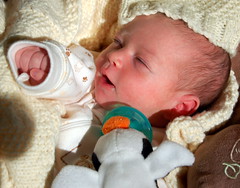 I talked to dad over IM this morning.  He was leaving his house around nine thirty to head down to Leicester to meet up with aunt Sharon and uncle Leo and then to leave from their house to head on down to Peekskill.  They are hoping to do all of their driving during the middle of the day.

Dominica’s parents left Peekskill at ten this morning to head back to Frankfort.  This is our first time being alone with Liesl without anyone to help out.  It’s a little scary.  It is only for several hours until my family arrives but still.

I had a pretty busy morning “at the office”.  I was really surprised when dad and the Richardsons arrived at the house between two thirty and three in the afternoon!  We were figuring that they would arrive closer to four or five or possibly later.  I was expecting that they would be making a long lunch stop and making the drive rather relaxing.

Everyone was very excited to see baby Liesl.  Unlike Dominica’s family, for whom Liesl is the fourth grandchild (and the second this year), this is the first child of this generation for my family.  So my father is a grandfather for the first time and aunt Sharon is now a great-aunt.

The afternoon was spent with everyone in the living room just passing Liesl around.  I had to go back down and work for the rest of the evening.  I came up from time to time to see everyone but it is an extremely busy Friday night so I was stuck in the basement for most of the evening until quite late.  I have to work again tomorrow as well.  Tomorrow is going to be a long morning of work.  I start at eight as usual but have quite a bit of stuff to do.  It is impossible to really get to visit with anyone these days because I am always working.  I am so thankful that I had vacation most of this week.

For dinner no one wanted to drive anywhere and I couldn’t because of work so we decided to order in.  The Chinese restaurant in the Beach Shopping Center (Emperor’s Choice, maybe?) left a menu on our door earlier today so we decided to give them a try as that was rather fortuitous.  They have a very large Chinese and Japanese menu with a lot of good vegetarian options including udon noodles which are hard to find in delivery places I have found.

Everyone really enjoyed dinner from the Chinese delivery place. It was very fast (although not as fast as in Newark where they would deliver via bicycle.)  All of the food was really good.

After dinner Dominica pretty much went straight to bed.  That was at eight.  The rest of us stayed up with Liesl until nine when it was clear that she was hungry and looking for food.  So Liesl went upstairs with Dominica and I played Fable 2 for a little while while dad relaxed and watched the game, Leo napped and aunt Sharon worked on Christmas cards in the dining room.  Everyone went to bed around ten and I played Fable for another hour and a half or so with Oreo snuggled on our snuggly recliner.