When my alarm went off at eight this morning it felt like I had not been to bed at all.  Two and a half hours of sleep.  Way too little.  I was very, very tired and quite soar as well.  Dominica and Liesl were still asleep but dad was awake when I went up to the office to see how things were going.  He had not seen the post-it note that I had stuck on the office door telling him that things were fixed so he did not know the state of things and whether or not we would be able to leave as planned. 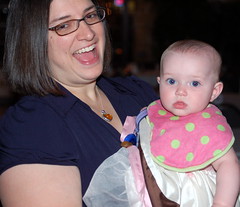 Luckily this gave me a couple of hours to sign into the office this morning and to make sure that things were running smoothly and that nothing was going to be needed in my absence.  I am only “off” of work for one day but everything falls apart regardless.  Or so it seems.

I was ready to go quite early.  Dominica and Liesl slept until almost nine, I believe.  They needed the sleep.  Dad could have used some more too.  We got the car loaded up and were on the road almost exactly at ten.  Not as early as we had hoped but far earlier than it might have been.  We built in a lot of buffer time so we still had lots of time in case things went wrong and we would still be able to get to the wedding reception without a problem.

We took the longer but more pleasant and scenic southern route taking NY 39 south out of Perry and slinging through southern Wyoming County to Arcade and then south into the Southern Tier counties heading eventually to US 86 and out to Erie, Pennsylvania.  I do not believe that Dominica has gone this way before or, if she has, that it has been a very long time.  We stopped in Arcade to get breakfast but it was ten thirty four – four minutes after McDonald’s stops serving breakfast – so it was lunch for us.  Four minutes.  Bummer.

On our way through Arcade Dominica saw the offices of the Attica – Arcade Railroad which she had never seen before.  It is a bright summer day and there were several AARR people standing around outside.  She was quite surprised that there was a railroad there and wanted to know when we could go on it for a ride.  I rode on the AARR long ago when I was quite young.  It is a short, scenic railroad that sometimes runs steam – which it did the time that I rode on it.  Hopefully my father will be able to figure out exactly when that was.

It was almost three thirty when we got to Alliance, Ohio where our hotel is.  We dropped dad at the hotel and then went to Long John Silver’s for their new Baja fish tacos that we saw advertised somewhere recently.  Dominica has never been to a Long John Silver’s and I have not been to one in a very long time.  Not a place that I frequent but every once in a while it sounds good.  I know that John Nicklin and I hit a LJS in the Pittsburgh area in December, 1999 on a business trip and I know that I have been to one at least once since then, but that is the extent of my definite memory.  We got our food to go.  Four fish tacos for $3.69!  We took them back to the hotel to eat there.

We got checked in to the hotel and unloaded the car.  We ate our tacos which were pretty good.  I liked them but didn’t think that they were all that exciting.  A great value for sure but not exciting.  Dominica really liked hers and thought that it was just as good as the ten dollar fish tacos from On the Border.  I did not feel that that statement could be made but did agree that they were the best priced fish tacos around and that I was happy to eat them and save nine dollars. 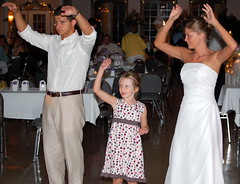 I finally got a chance to shower and relax a little.  Dad, in the room next door, managed to squeeze in a short nap.  Boy is it nice to be out of the car for a little bit.  It is also nice to be at the hotel in Alliance.  We stay here often enough that it is very comfortable.  We know our way around and where we are situated compared to the area.  We’ve been using this hotel for years because they are convenient, affordable and accept dogs.  Oreo loves staying here.  It is really too bad that he was not able to be here with us on this trip because of the heat.

Today is definitely a hot one.  We have been having such nice, cool weather all spring and summer thus far.  Today, though, it is in the high eighties here in Ohio.  Much warmer than we have gotten accustomed to it being.  Way too warm for me.

We drove right from the hotel to the wedding reception in Massillon, Ohio.  We arrived right on time.  Still no sleep for me but I was doing okay.

We had a great time at Gwen and Mike’s wedding reception.  This was the very first time that Liesl got to meet anyone from my mother’s side of the family!  Hard to believe that she is almost seven and a half months old and that this is her first time meeting so many people but travel just has not really been an option until now and knowing that we were going to be making this trip kind of held off everyone making a trip just to see her. 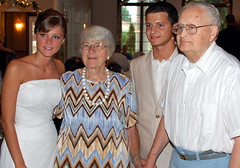 It was very nice getting time to visit and Liesl had so much fun.  This is her second wedding and she just loves getting to meet new people and getting passed around be help by one person after another.  She is our little social butterfly.  No doubt about that.  She definitely get’s that from me and me from my mother’s mother.

Mike and Gwen got married in Cancún, Mexico on July 4th which is also my grandparents’ anniversary. My grandparents celebrated their sixty-second anniversary on the day that Mike and Gwen were married. We had really wanted to go to Cancún but there was just no way. We had a prior commitment and with Liesl it just wasn’t possible. Dominica and I had really wanted to have gone to Mexico a few years ago but just never managed to make it happen. Someday I am sure that we will go. Either for a short trip and have Liesl stay with family or wait until she is older and can go with us (once the current national security crisis in that country has subsided.) Honestly, though, Mexico is near the bottom of my “must see” locations in Central America. I would prefer to see Panama, Guatemala, Belize, etc. But prices are good now. Maybe this winter we could sneak away to go down there if the political climate cools off.

We stayed at the party until around ten.  Boy were we all tired.  Dominica drove us back to the hotel in Alliance and it was straight to bed for everyone.  Tomorrow we are going to visit my family in the morning at my grandparent’s house in East Canton and then back to New York in the afternoon.  I do, of course, have to work in the morning so it will be a busy day.