Finally a chance to really sleep.  Boy did I feel better this morning.  The Comfort Inn in Alliance is quite nice and we always sleep really well here.  I would sleep better if I had my Oreo though.  It is tough sleeping when I know that he is somewhere else. 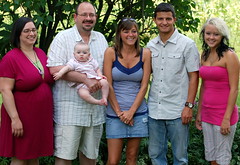 I slept a lot but was up about every two hours all through the night.  Probably just over-exhaustion forcing me to get up and move around from time to time.

Dominica and I got breakfast down from the continental breakfast buffet in the hotel.  Then she, dad and Liesl drove out to my grandparents’ house with my grandmother leaving me in the hotel to work on my own for several hours.  It was around nine thirty when they left.

Everyone took the BMW earlier so I had my grandmother’s Chevy Impala to drive out to East Canton.  It was not until I was checking out of the hotel that I realized that I did not have my GPS unit anymore and that I would be driving blind.  It is amazing how quickly you become completely dependent on a GPS unit.  All of a sudden you wonder if you even know where the highway is.

I made it, safe and sound and without any wrong turns, to my grandparents’ house in East Canton at twenty past noon.  Originally we had thought that we would only stay in Ohio until around noon but obviously that did not happen.

We visited for several hours.  My aunts were there as were my cousins Monica and Gwen and my “new” cousin Mike who joined the family this week.  We have known Mike for years, though.  He and Gwen even visited me when I lived in Ithaca in the summer of 2002 so we have known Mike for a long time.  That was a full seven years ago.  Boy am I ever getting old.  That was a really big deal because Gwen was eighteen and finally old enough to drive out to visit me.

We ate lunch at my grandparents’ house and visited until after three.  Then we went out to the garden and took some pictures before we had to climb into the car and get back on the road towards New York.  Today is going to be a really long driving day.  I have already driving twelve hours this weekend and there is about nine more hours to do today and three more tomorrow morning.  Not as bad as when Francesca and I drive to Texas, though, which is twenty six hours but with two people driving.  Only me driving on this trip.

We had been hoping that we would have had time while in Ohio to stop by and visit my great aunts who live nearby but there just was not any spare time at all this weekend.

It was three thirty ish when we got onto the road from East Canton, Ohio.  We drove out to OH 225 and were thirty so we stopped by Mike’s Pretty Good Grocery, or something to that effect.  Some side of the road grocery and beverage distribution place.  A bit of a shack, really.  Low and behold, inside there were stacks and stacks of Pepsi Throwback – the new, limited time only real sugar version of Pepsi!  So we bought a flat of them.  Twenty four twenty fluid ounce bottles for just five and a half dollars.  Now is that a deal or what?  We were very excited.  Dominica and I have been looking for this for a few weeks now.

Then we drove up to Erie, PA where we decided to make a pit stop for some lunch.  Dominica was so happy with Long John Silver’s yesterday that we looked in the GPS and found one on Peach Street in Erie and decided to just eat there.  Peach Street is pretty convenient for anyone traveling through the area.

Lunch was good and cheap.  Everyone enjoyed it.  Dad and I tried the buttery lobster bites.  Not the best thing ever.  The baja fish tacos are definitely the item to get. So cheap and quite tasty.  They do have some new, grilled items that are much healthier than their traditional fare.  Dominica tried the tilapia meal and liked it.  I want to try the grilled salmon sometime.

From there we drove back to Rochester by way of the Thruway to save time even though the drive is longer and costs more.  We got to dad’s house and dropped him off.  We only stayed just for a minute.  Then it was back onto the road and over to Geneseo so that we could get coffee from Tim Horton’s before driving for another three hours.  Dominica had really wanted to cut the driving short today and stay at dad’s house rather than driving on to her parents’ house so that we could get out of the car for a while but when she thought about the fact that that would mean going to bed early (possibly not falling asleep because it would conflict with our usual schedules), not having Oreo for another day, driving just as long tomorrow and getting up at three in the morning to make this all possible she decided that it was definitely the right thing to do to press on tonight and get as much of the journey completed as possible.  I was not really drowsy yet so we needed to take advantage of the situation.

It was nine in the evening when we left dad’s house.  What a long day already.  The drive out to Frankfort went fine.  Three more hours in the car.  It was minutes until midnight when we arrived there in a serious rain storm.  There was so much water coming down that the storm drains were dumping water into the streets and the streets were like little rivers.  At one point Dominica accidentally dropped Liesl’s portable highchair out of the car and it floated down the street!

We were pretty awake when we arrived at the Toccos’ and Francesca had some work for me to do.  Because Joe is moving to Texas in the morning (he and Brittany are driving down to Houston at five in the morning) he had unhooked his wireless router at the house and the family had bought a new one that evening.  It was not working so I had to log in and get that set up.  That was pretty quick.  Just issues because of the “easy configuration” software that, of course, breaks the whole thing rather than making it simple to configure.  What could possibly be simpler than the original web interface I have no idea.  Making you install confusing software with a unique interface that doesn’t handle normal scenarios is the worst possible option.

After that I fixed the output on the AppleTV.  It was having some signal issues during darker scenes.  Works fine now.  After that we visited for just a little bit as Liesl was not yet sleepy then got to bed between one and two in the morning.