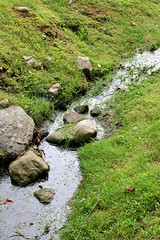 I did manage to take just a few test shots today with the Nikon D50 and the new 35mm lens that came yesterday.  I will be using it more at the wedding reception tomorrow, I expect.  But I wanted to grab a few additional test shots today and so I walked around taking some outside.  I discovered this little stream in my backyard, much to my surprise, so I took some pics.  I love the clarity on the new lens.  Really sharp.

The day was very normal.  Busy with work trying to get as much done as possible before we hit the road.  Anything not done today has to wait for almost a week until I get caught back up again and have time to get to things.  In addition to normal work I also did all that I could to get Handbrake set up on both machines in the hopes that it would be able to run for the entire time that we are gone.

Dominica spent the day packing and getting us as ready as possible so that we could leave the moment that I was done with work.  We are not taking much of anything with us on this trip.  No spare space to do any moving of stuff between our house and dad’s like we usually do.  Just one bag of DVDs to take so that they can go into storage.

I wrapped up work and we were on to the road around seven thirty.  It is going to be a really, really long night.

We skipped dinner to speed things up and grabbed food and coffee from McDonald’s on the Thruway just south of Albany.  Monica texted me while we were driving to find out when we were getting out to Ohio.  I only get to see my cousins about once a year so we always look forward to getting to see each other a lot.  It is tough being so far away from family.  We are far enough from Ohio that it is really difficult to get out there to see people.  We seem to only ever make it out when there is an event.  This is the first time that Liesl will be meeting anyone from Ohio, in fact!  Liesl is over seven months old now.

We made one additional pitstop during the drive and got Dominica some different coffee because her McDonald’s coffee was old and burnt and she had to throw it out.  Normally we love their coffee.  The decaf at night just was not fresh at all though and she could not bring herself to drink it.

We arrived in Frankfort at a quart until eleven at night.  Ugh.  We dropped off Oreo which was very sad.  We hate leaving him and being without him for the weekend.  I don’t sleep well when he is not around either.  I need my puppy snuggles to sleep comfortably at night now.  I am used to his snoring.

I had to do some quick work before we left because there is a datacenter relocation going on tonight and I have to shut down some servers for it.  We are doing updates to the servers since they are being cycled so that the updated get applied since getting time to restart the boxes is always a pain.  So we figured that we would be in Frankfort for about an hour.

Things went pretty badly with the shutdown process.  I did the updates and brought down most of the boxes and then discovered that something was wrong and that the boxes were not able to start again!  Very bad.  Very, very bad.  I worked for about an hour trying to determine what could be done but after midnight there was nothing to do as the servers needed to be turned off for the physical move.  So I worked until midnight and then we jumped in the car and drove towards dad’s house.  According to my Twitter feed, it was twenty four minutes into the new day when we hit the road.

As you can imagine it was a very stressful drive.  We spent the time strategizing about what would be the best course of action depending on what happened and when with the servers.  We called dad and ran through the scenario of determining that the servers were dead tonight and driving straight to Ohio rather than sleeping first but that did not seem like a reasonable option.

We arrived in Peoria, New York at five past three in the morning.  Exhausted but stressed and wired so no way was I going to fall straight to sleep.  Dad already had beds set up for us and had gone to bed himself.  Dominica took care of putting Liesl to bed and setting up my CPAP so that I could get to bed as quickly as the situation would allow.

No luck falling asleep.  I was too uptight to fall asleep at all.  Luckily I thought of using a web-based ping utility from bed.  Around four thirty I did a ping and noticed that the machines were responding.  I was up and out of bed like a shot and back up to the office upstairs.  After a really crappy night we ended up with a “best case” scenario – almost – and by a quarter after five all of the machines were back up and running without any problems.  What a relief.  It was a really long night but things worked out pretty well.

So at five thirty, roughly, I fell asleep finally.  Tomorrow is going to be a really rough day.  I need to be awake around eight which is slightly later than I had hoped originally but far better than we had thought that it might be.  Dominica is planning to get up with Liesl which will likely be closer to seven than to eight.  So, if all goes well, I will manage to get two and a half hours of sleep tonight after having worked all day and driven all night with loads of stress.  Ugh.  At least it is over now.  Just have to drive tomorrow.