I woke up rather late this morning, but I don’t think that anyone was expecting me to be into the office bright and early today anyway.  I got up and took my time getting ready.  I hopped on to the BlackBerry just to be sure that there were no fires but I didn’t actually straggle into the office until around ten.

This week is going to be crazy busy.  Monday through Wednesday I am working in the office as usual.  Then on Wednesday evening Dominica, Liesl, Oreo and I are driving down to Houston and spending the night.  We will get there pretty late.  I am then taking Thursday off from work and we are taking Liesl to the Houston Zoo which should be a lot of fun.

On Friday I am working from Houston at the Grices’ and then, as soon as work is done, I am picking up Brian and we are driving from Houston to Hatiesburg, Mississippi where we will crash for the night.  Then I have to get up and work on Saturday morning doing Linux patching.  Once that is done we will be back on the road and off to Philadelphia.  What a week it will be. 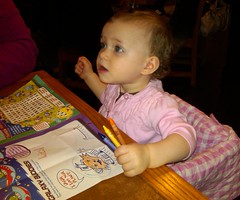 Work wasn’t too bad today, thankfully.  For lunch John and I went to Rockfish.  I was in the mood for fish tacos.  I have discovered that I can get the fish taco dinner portion there and split it with Dominica making for two entire meals.  After tax and generous tip the total is still just over thirteen dollars for the two of us to have a really good meal.  Texas is so cheap!

I dropped off lunch for Dominica, played with Liesl, walked Oreo and then walked back to the office.  Still nice weather.  It just keeps going and going.  We have been going back and forth between fresh air and air conditioning at home.

I got home around six thirty and we piled in the car and drove out to On the Border for dinner.  This is our first meal out since getting back home after our trip to Las Vegas.  We had some shopping to do and figured that we should go out to eat.  Technically we went out for lunch but that was from work.

We ate dinner then ran over to Walmart for some really quick supplies.  Then it was off to Men’s Warehouse as I had two suits that have been ready for several days that I needed to pick up.

We got back home and felt that Liesl might be getting tired.  She had fallen asleep in the car.  So we just watched some Soap but she never actually fell asleep and Dominica just finally had to take her to bed at midnight.  DST really messes with the rhythms of everyone, doesn’t it?

I stayed up late getting some work done as the only time that I can do it is after everyone has gone to sleep.