We had some light rain this morning but nothing much.  I got up, walked Oreo, took my shower, played with Liesl, made coffee for Dominica and I and walked into the office.  Had to wear a light jacket.

Busy morning at work.  I walked home today and we just had pasta and watched a little bit of Soap while we ate.  Liesl was very sleepy but stayed awake the entire time that I was home so we got some time to hang out today which was nice. 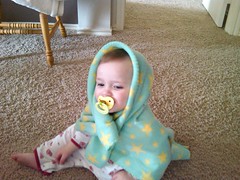 I found out today that my training materials for my class are arriving on Thursday – the day after I leave Dallas for almost two weeks.  Could they have procrastinated any more?  For how expensive these training classes are they sure don’t think through how to reliably get the necessary documentation to you until it is way too late to deal with it in any meaningful way.  So I am trying to figure that out now.  The only option that I can think of is to either have the stuff overnighted to Houston, which is risky as I will only be there for one day in which to pick it up, or to have it overnighted to Philadelphia.  No matter what it is going to be a huge pain.  Red Hat didn’t leave any room for error on those books and there was error with an entire month in which to have gotten the books out to us so that this would not have been an issue.

Busy afternoon as well.  I walked home a little after six.  We spent the evening watching Soap and playing with Liesl.  Just had veggie hotdogs for dinner.  It was a very casual evening.

Liesl stayed up late – the product of Daylight Savings Time, grrrrr.  After Liesl fell asleep Dominica tried to get the latest content for Dragon Age: Origins that released today but discovered that the new content is actually a disc that you have to go to the store to purchase.  So now she has to wait a week and a half before she will be able to play her new game.  So once she figured that out she stayed up for an few hours playing her new game of Dragon Age: Origins.  She is probably a dozen hours or more into her new character.

I put in some time getting iTunes set up and my iPod loaded up with tons of technology podcasts to listen to in the car this week.  I haven’t been using my iPod recently and I need to get back into the habit.  I am way behind on my listening.

The big news happened this evening at half past midnight (EDT) when RIT sent out alerts that there was an armed, suicidal gunman on campus and told everyone to take cover.  I immediately Twittered and Dominica hopped on her laptop to check FaceBook to see where Sara, my cousin, was.  Neither of us were on campus so no worries for us.

By the time that I received the alert to take cover, though, Sara had already received the all clear!  That is not good.  I hopped on Twitter and followed the #RIT tag to see what was going on.  Boy, there was a lot of traffic.  The main thread of the traffic was, though, that why were there so many people talking on modern communications channels and yet RIT was unable to get any information out to us.  They were using TXT and phone calls but weren’t publishing to Twitter or FaceBook and emails were way too slow.  Had RIT put info on Twitter everyone would have known instantly what was going on.  But instead all the RIT students were just stuck discussing how incompetent RIT was and how little they were doing to protect us.

To add insult to almost injury, as no one except the perp was actually hurt in the chain of events, RIT said, in every communication that they sent out, to check the RIT web page for the latest details and instructions.  But even hours after the events were all over RIT had never acknowledged that anything had happened on their website.  The main site, that they directed people to, had nothing.  The emergency site was woefully blank as well.  This was a “Toyota fail” event, I think.

In the end it took forty minutes before I received the all clear from RIT after having already received it from other people via Twitter and FaceBook.  That the students can communicate in real time but RIT cannot is just plain sad.  RIT likes to think that they are a technology school but they seem to constantly be falling down, unable to handle the simplest technology tasks.  Last semester it was my professor who was not knowledgeable of the Micosoft Word file format that she required that we use – yes, she required it and yet could not read it and didn’t not even know what it was when she received it!  She was also unable to manage installing or having the IT department install the free Word reader or the free compatibility pack, both from Microsoft, or OpenOffice, also free.  What exactly are the requirements of working at RIT?  Seriously?

So it was around one thirty in the morning (CDT) when I turned in for bed.  Dominica was up just a little while longer playing Dragon Age: Origins but she came to bed shortly after I did.

Tomorrow I am in the office and then, after work, Dominica will pick me up and we will drive on down to Houston where we will spend the next two days.  Then Brian and I are off for our road trip to Pennsylvania and, ultimately, New York.