Dominica got up early this morning, around eight, so that she could play some more of Dragon Age: Origins.  She is really addicted.  I can’t believe that she is on her second time through the game already. 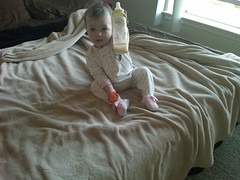 I was up on the early side and thought that I would be off to work nice and early.  Of course I was unable to pull that off in the least.  I was delayed just long enough that Liesl woke up and saw me getting ready to leave.  So she got up and wanted me to hold her.  Then, when Dominica was changing her, a silverfish crawled onto her and Dominica got really upset (don’t worry, silverfish are not aggressive – it wasn’t attacking her, it was likely confused) so we had to do an emergency cleaning of the entire house, top to bottom.

While we were cleaning Liesl sat on our bed drinking a bottle.  She was so cute just sitting there watching out the window hanging out by herself.  I just had to take some pictures.

Then I was able to walk over to the office.  Another great day in Texas.  I just can’t get over how nice our weather is.

At lunch, which wasn’t until after one, I walked back home and we had leftovers – pasta from the other night.  We watched an episode of Soap and Dominica played a little Dragon Age: Origins.

Back to work for the day.  Then, as soon as work was done, I walked back home and helped Dominica to load up the car.  Then we were off to drive down to Houston.

It was pretty late when we got in to League City.  We had called Brian on the way through the Woodlands.  He has a printer (a very large one) that we need to coordinate moving this week.  We were hoping that we could just pick it up as we passed through but did not realize that it had to be picked up from a business tomorrow so that is going to add to tomorrow’s list of coordination.

So we drove on down to League City and got off to sleep shortly after arriving.