We were up at four but it was a restless night and we were still very tired.  Liesl tossed and turned all night long and never really let us get to sleep at all.  That is going to make today very rough indeed. 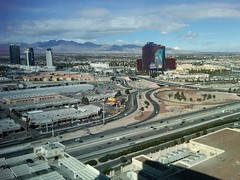 We got ready to go as quickly as we could and were on to the road at four forty five to drive across the city before rush hour started which is a real concern going from League City up to the big airport up north.  It is a long drive and i45 can become very congested if you get past five thirty or so.

The drive up to the airport was fine.  No traffic at all.  We are leaving the car at the airport and Brian is picking it later once he wakes up.  He will use the car for the rest of the week which works out pretty well.

We got to the airport and through security pretty well.  We found out that our particular flight was not in the terminal normally used by Continental  and so while we were in our terminal with plenty of time we had to take a massive hike out two terminals away to catch our flight.  That ate up a lot of time and was rather exhausting.  We did not check any luggage on this trip and are carrying a lot of stuff with us.

We had not eaten before getting to the airport and were pretty hungry, especially after yesterday when I only managed to eat once all day anyway.  So Dominica watched Liesl and I quickly picked us up something to eat.  Breakfast tacos for me.  Dominica just had a bagel.

We ended up cutting it really close and didn’t really have time to eat before getting on to the flight.  We are trying this flight with a car seat for Liesl rather than holding her in our laps.  We thought that this might work better but boy oh boy were we ever wrong.

Having the car seat on the plane meant that Liesl was pissed because she did not want to sit that way and it also meant that we had no room in our row to maneuver because the car seat was taking up so much of the space.  Bad idea.  We still had to hold Liesl for much of the trip but without having enough space to do so she was incredibly unhappy as were we.  She just screamed and screamed making pretty much everyone else pretty unhappy as well.  She is the loudest child ever.

We were very thankful when we touched down in Las Vegas at eight forty five and could get off of the plane.  Vegas falls into Pacific Time and so we have jet lag to deal with for the next few days as well.

We had a shuttle all scheduled and ready for us so we just had to grab our luggage and make it to the taxi stands.  That was incredibly easy.  Dominica is really good at getting this stuff all organized prior to us ever leaving.

We got to the hotel around ten local time which was almost noon back in Texas and one in the afternoon back in New York.  A bit later than I had been thinking that it would be.

We were incredibly hungry when we finally got to the hotel and got unpacked but we were really impressed with the hotel room.  We got room 30-034 which, of course, was on the thirtieth floor and had views out over the Belagio, Paris, Rio, etc.  It was an awesome room.  We loved the layout.  The bedroom and the living room were split only by a narrow wall that had a large LCD screen on either side – one facing the king bed and the other facing the couch.  Very nice setup.  Attractive and very functional.  There was a great workstation for me to setup my laptop as well and tons of windows with a gorgeous view.

Even though it felt like the middle of the afternoon it was still pretty early on Pacific Time so we called down to room service and ordered up some breakfast.  It took about half an hour for breakfast to arrive.  It was very impressive.  They set the table just like we were at a nice restaurant and they even brought up a toaster and toasted our bread right there on the spot so that it would be hot.  The food was excellent although at $80 for two adults and a toddler it was rather pricey.  Maybe avoiding room service is the way to go for future meals! 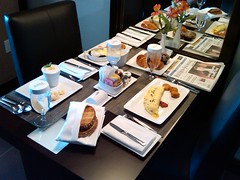 After breakfast I set up shop and worked for the day.  In the middle of the afternoon Andy came down to visit for a little while and then went and did some more wedding preparation stuff while I finished up working for the day.  After the work day was over we went down and met up with Andy and Miranda and Miranda’s brother Kip and his fiancee Jan and we went out for a walk in Vegas looking to find the Walgreen’s that carried soy milk as we had run out for Liesl and it was just a matter of time before she was going to get hungry and would be very upset if we did not have any more food for her.

The walk was surprisingly long considering that the Walgreen’s was practically right across the street.  But to get out to the strip required walking through the Vdara and then through the Aria and out through the new City Center shopping complex and then down the street and across Las Vegas Boulevard and then back to the Walgreen’s.  It was a good hike.  We did manage to find soy milk, though, so Liesl was happy.

We did some wandering around on the strip for a little while and then returned to the hotel and got ready for dinner.  Once everyone was changed and ready we met in the lobby of the Vdara where almost everyone was staying.  Dinner was Andy’s parents, Tony, Dominica, Liesl, Miranda’s parents, Miranda’s brother and fiancee and, of course, the wedding couple of me, as well.  We walked over to the Aria where we had a Spanish tapas dinner at Julian Serrano.

Dinner was excellent.  Everyone really enjoyed the food.  Tony thought that it was the best meal that he had ever eaten, in fact.  Everyone did tapas and some people went on to do paella as well which Dominica and I decided to forgo.

After dinner we stopped by the Aria’s patisserie and picked up dessert for tonight and breakfast for tomorrow to save us from the temptation of ordering room service unnecessarily.

After hitting the patisserie it was only about eight thirty but everyone was exhausted and decided that it was time to turn in for bed.  So we all went out separate ways.  Dominica and I were definitely ready to get some sleep.  Eight thirty local time is ten thirty at home in Texas and eleven thirty back in New York and since I still work on New York hours we were pretty tired – especially after getting almost no sleep last night and having traveled so much in the last twenty four hours.

Tomorrow morning I have to be up early as I am working a normal day before the wedding.  Luckily working from the hotel room has proven to be really easy.