Today is the big day!  Andy and Miranda are finally tying the knot.

It was a gorgeous sunrise over the Mojave Desert with the reds and oranges and purples splashing across the distant mountains.  Very cool.  A great way to wake up when you are high in the Vdara and have a commanding view of the region.

I was up very early this morning around six.  I got a great night’s sleep last night and felt pretty good this morning.  Liesl was up at about the same time as me.  She doesn’t put up with jet lag and just keeps herself on her regular schedule regardless.  Dominica got up about then as well.  No point (or way) sleeping in when everyone is awake. 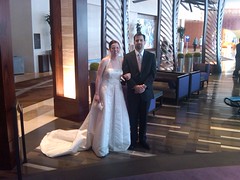 It was good timing since I was able to continue working on New York time.  Dominica and Liesl settled into the living room area and watching HGTV-type television, Dominica’s vice when we are in a location that has cable television, and we devoured the pastries that we had remaining after we had eaten last night.  That was a much more cost effective breakfast than yesterday.

The day passed pretty quickly.  We did not leave the hotel room pretty much all day until time rolled around to start getting ready for the wedding.  Then I got my suit on and signed off from work.  It is just me going to the wedding – Dominica and Liesl are just going to hang out at the Vdara.  Liesl fell asleep just a little bit before I left so Dominica didn’t even get to come down to the lobby to see us all off.

I went up to Andy and Miranda’s room to help Andy get ready.  Not that he actually needed me for anything.  Really all we had to do was to regroup, put on our matching silvery-pink ties and head on down to the lobby to meet up with everyone getting into the limo to head out to Red Rock for the wedding itself.

Everyone gathered in the Vdara lobby.  We had about half an hour to wait on the limo and then we piled in and headed out to the Red Rock Canyon.  The drive took about forty five minutes and gave us a nice tour of much of the city of Las Vegas which was quite interesting as most people in Vegas never see anything except for the casinos and the strip (and the airport) but we got to go through lots of shopping and residential areas.  There are some really nice areas to live out there if you enjoy desert living.

We got out to the end and hiked a little ways into the park (not very far, maybe a five minute walk.)  The ceremony was held on a wooden platform suspended over the desert a few inches.  There was a wooden walkway going from the parking lot out to where we were which, I presume, was used to protect the desert from people tromping all through it all of the time.

The ceremony was really nice.  It was neat having it is such a cool location.  The weather was perfect for a wedding too.  Cool enough that people were not getting warm and warm enough that no one needed a jacket or anything.  And it was dry but that is to be expected in the desert.

After the ceremony itself there were some quick pictures and then back to the limo to follow the photographer as we traveled through the Red Rock Canyon Conservation Area.  We got to see some really cool stuff and drove way up into the mountains getting very close to the snow line.  There was a surprising amount of snow up there.  No snow where we were but quite a bit not very far away.  There were some awesome vistas from up in the mountains and at one point we could see the city of Las Vegas way off in the distance.

The picture taking took an hour or two and then it was time to drive back to the hotel in the city.  We got back at about the perfect time for coordinating dinner.  Some people ran to change and do other post-wedding activities.  While we were waiting for people Natalie’s father and I hit the Vdara lobby bar and had a drink.  Then Natalie’s mom joined us for another drink and eventually Tony joined us as well.  We had sidecars, aviators, Brooker’s bourbon, etc.  I love the quality of drinks in Las Vegas bars.  Las Vegas takes its drinking very seriously.

Some of the group ran to the Aria casino, because the Vdara is a non-gaming resort which is awesome, and did a little quick gambling before the dinner.  Then we all met at Jean-George’s Steakhouse for the wedding reception dinner.  Dinner there was fantastic.  Tony had his first oysters from the chilled seafood appetizer starters that we all had. 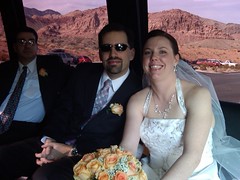 For dinner I got the black cod which was excellent.  I also had the beet salad which was completely amazing.  Endive, mushrooms, warm goat cheese fondue and beets.  Totally amazing.  The whole meal was really something.  It is too bad that Dominica and Liesl couldn’t go but Liesl would not have been happy and small children are not allowed in the restaurant.

After dinner, most everyone headed off to bed or to their own activities.  Andy and I went to the tapas restaurant from last night to pick up dinner for Dominica.  She had tried to order in from the 24 hour room service and found out that they always open room service closed at ten.  Umm, what?  A “five star” resort that advertises around the clock room service closes, without warning, at ten in the evening on a Friday night?  I thought that around the clock room service was  a base requirement to even be remotely considered a four star resort.  Dominica was not happy.  It was prime dinner time on a Friday night in Vegas and our resort stopped serving dinner!

So Andy and I delivered dinner up to the room while Miranda and Natalie went down to the bar to get started without us.  While Andy and I were having coffee and waiting for the food Julian Serrano came into the restaurant and was right behind us.  He was busy so I didn’t say hello but we did get to see him just a foot away from us.  Cool.

When Andy and I made it to the bar to pick up Miranda, Natalie, Kip and Jan to head out they had drinks waiting for us.  So Andy and I had to do tequila shots and cable cars that were already prepared “to go” for us.  This is going to be one rough night.  There was champagne on the way to the wedding, champagne on the way back, then sidecars, aviators, bourban and more at the bar between the wedding and dinner, wine and dinner and now tequila shots and cable cars!  Whoa.  Andy and I are not as young as we used to be.  I knew this was coming so was eating bread as much as I could at dinner. 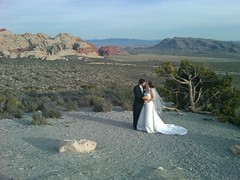 Miranda and Natalie wanted to get “Eiffle Towers” from Paris which are massive rum-filled plastic novelty drinks that cost about thirty dollars each.  So that was our mission for the evening.

We got over to Paris just in time for them to close the “Eiffle Tower” station.  They were turning people away and had shut down the drink machines.  Natalie somehow managed to persuade the guy to turn the machines back on and make drinks just for the five of us (Kip was not drinking, just along for the walk) while continuing to turn other people away.  Those drinks cost a small fortune.

From there we walked the strip and made an attempt at riding the monorail that runs through the strip.  Getting to the monorail proved to be quite a challenge with the directions guiding us through one resort after another through casinos and shopping areas.  It was very confusing.

We eventually made it to the monorail and rode it all over Vegas.  It was probably one or two in the morning when we stumbled back to the Vdara where everyone was staying.  I have jet lag or at least “jet confusion” so I was not completely clear on the time and did not have a watch so was not really paying attention to the time.

It was a good day.  Everyone had a lot of fun.  Andy and I have not been out drinking together in many years.  Maybe five or six years.  Possibly longer, I suppose.  It was nice to get a night out on the town in Vegas.  Vegas is an interesting place to go out.  The complete lack of day and night (except, apparently, for the Vdara’s room service) makes it a truly weird place to be.  It would appear that no one can tell what time it is when they are there.

Tomorrow we fly back to Houston at noon.  Andy and Miranda are taking a helicopter tour of the Grand Canyon at noon.  I have to work for the office early in the morning so not much time to relax for me.  We will be back home in Irving on Sunday evening.