I slept in a little too much this morning but I desperately needed to play a little catch up on my sleep.  Once I was up we were out the door pretty quickly and down to Brian’s USA Diner in Mt. Morris for some breakfast before really getting onto the road.  Brian, Jen and I ate and while we were there Mark and Rhonda Popp stopped by to say hello.

We went straight to Autoworks so that we could get the Mazda PR5 and the BMW X3 both inspected since that was the primary reason for the entire trip.  We dare not miss that!  They got us in straight away and it really did not take too long.  I took Jen around and made introductions while we had some time.

Once the cars were finished we drove up the street to Lifestyle Properties but were not able to find anyone there.  We waited a little while and then gave up and drove down to Boynton Middle School to hang out with Nate.  School was just ending at this point (boy schools get done early) and Nate was free to hang out.  Bob was not around as he was in Westchester for a funeral so we did not get to see him.

We hung out at the school for a little while then we all went down to the Ithaca Bakery and had lunch.  I have not had Ithaca Bakery / Collegetown Bagels in so long I can’t believe it.  That was some awesome food.  I had to get two sandwiches just because I missed it to much.  Collegetown Bagels up at Triphammer was the staple of my diet when I first moved to Ithaca in 2000.  I ate there several times a week when we lived at Gaslight Village Apartments right up the road.  Good times.

After lunch Jen and I went downtown to see a client of hers that was not expecting her.  Always nice to surprise people halfway across the country.

From there we dropped off her car, the Mazda, and drove up to the Lucente’s home to see if we could track down Steve and Pat.  It took a while of ringing the doorbell before Max opened the door and did a search for us to see if anyone was home.  No one was.  He said that Steve had mentioned heading off to Barangus in Ulysses so we said that we would head out there to find him.

I haven’t been to Barangus in years.  Not the kind of place that you make a point of stopping into when you are visiting from across the country.  I’ve been there with Steve in the past. 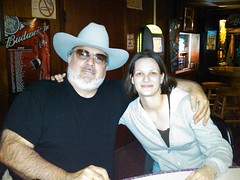 Steve is always unmistakable, even from quite a distance.  We found him at the bar with two friends – the bar otherwise empty.  I came up behind him and slapped him on the back and gave him rather a surprise.  We haven’t seen each other since Max’s bar mitzvah three years ago!

Jen and I hung out with Steve at Barangus for several hours.  The place when from empty to pretty busy.  Then around nine we hit the road.  Back down to Ithaca, picked up the other car then down to Binghamton to meet up with John Stephens in Vestal at a diner there.

We had a light dinner and Jen and John got a chance to meet which was handy.  I haven’t seen John in quite some time either.  We did not stay too long as it was getting late.  From there it was on to the road down to Peekskill.

It is a little over two hours from Binghamton to Peekskill.  We got into town and I got to see my house for the first time in more than three months.  What a weird feeling that is.  I’m always awed by the sensation of going to a house that I own after having been away for months.  It is just so weird.

The house was left unlocked – just great.  Not what I wanted to discover when I arrived.  But nothing was touched in the house – not that there is anything at all worth taking.  The place is down to miscellaneous cleaning supplies and the furniture that we are leaving behind.  Everything of value was already removed.

I discovered a lot of spoiled food in the fridge and three dead plants upstairs.  Just what we wanted in the house that is being shown for sale and rent.  Ugh.  I will need to deal with all of that tomorrow.  I was hoping to find that nothing was wrong but apparently leaving things to be done after we aren’t there to supervise doesn’t work very well.

We were pretty wired from the busy day and all of the driving.  It didn’t take long to discover that there is absolutely nothing to do in that house.  No Internet, no television, no books, no nothing.  There is some wine still in the house but it is all wine that has gone to vinegar that we plan to throw out when we move out.

We were bored and had just nothing to do but I discovered that there were fake fireplace logs still there and it was just a little cool outside so I started a fire in the fireplace and opened a bottle of spoiled wine.  Of course, there is no corkscrew in the house.  So I tried several things before I figured out that I could open the wine by drilling it out with my drill – one of the very few items left in the house.  Just working that hard to open bad wine was enough entertainment for us!  The wine was definitely turned and corked though.  About as bad as wine gets I guess.