Up at a quarter to seven again this morning.  I went to bed really early last night but haven’t been sleeping very well.  Liesl likes to push me out of bed and it makes it really hard to stay asleep long enough to get good REM. 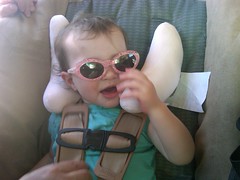 I am working the early schedule now at the office as I started last week.  I worked from Joe and Britt’s house for a few hours until around ten thirty.  Dominica packed up our stuff and got the car ready so that we could leave pretty quickly.

At ten thirty we went up to League City and met up with Francesca, Garrett and Clara at Waffle House on FM518 for a late breakfast / early lunch.  Then it was off to the Grices’ where I worked from the couch all day.

It was a really busy day at the office and really wore me out.  We had been planning to leave around four in the afternoon but I was unable to wrap up with work and did not manage to get out until just after five. 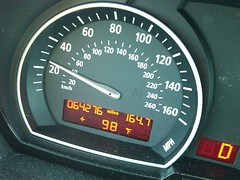 Liesl didn’t take a nap today which we tried to keep her from doing because we wanted her to be able to sleep in the car on the long drive north to Irving.  She did fall asleep very quickly and made it quite a long way while still being asleep.

It is a really hot day today in Texas.  The BMW says that it is ninety-eight degrees outside as we head through the Woodlands north of Houston!  That was around six thirty in the evening.  It was relatively dry and did not feel all that hot but it was most definitely warm.

As we drove north on interstate forty-five the temperature dropped dramatically.  We were able to watch it just go down and down as we moved along.  The lowest that we saw was just south of Ennis where the urban heat of Dallas couldn’t reach and there it was fifty-nine degrees!  A thirty-nine degree drop just driving between two neighbouring cities!  Pretty incredible.

We grabbed dinner at McDonald’s and ate on the road.  It has been months, I think, since we have had McDonald’s so that made a nice change.  Oreo really appreciated getting his favourite French fries.

We arrived back in the metroplex around ten thirty.  It was pretty late and Liesl went to bed after about half an hour or so.  It is good to be back home.

I stayed up for a while and worked on getting another paper done for my class at RIT.  I’m still a bit behind but at least I am making good progress.

I am in the office at seven tomorrow morning as my new schedule goes.  So not a lot of sleep for me tonight but just getting to sleep in my own bed should help a lot plus getting to snuggle with Oreo whom we have not been sleeping with since heading down to Houston.

I am very happy that I am finally up to date on SGL again.  It really wears on me when I am way behind.  Keeping up has been very difficult recently.  I’m doing what I can.